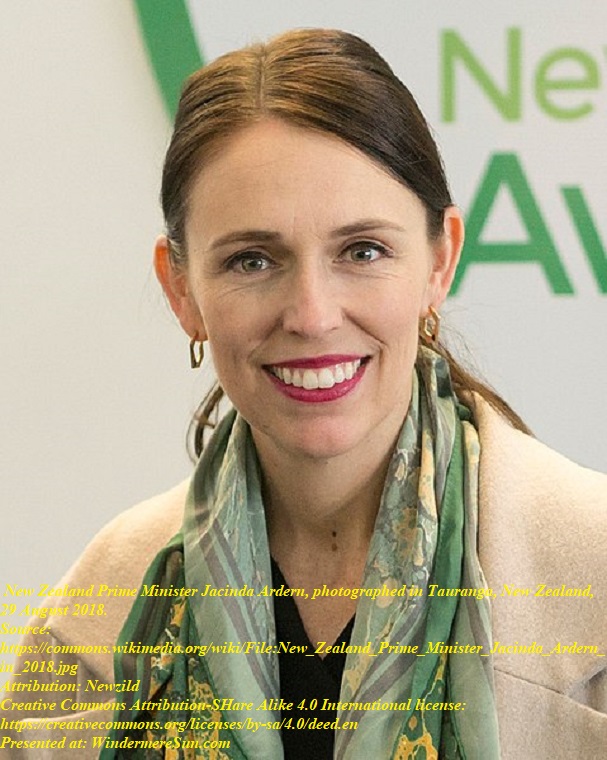 New Zealand PM Jacinda Ardern has announced her resignation in a shock announcement. At the Labour party’s annual caucus meeting , Ardern said she ‘no longer had enough in the tank’ to do the job. ‘It’s time,’ she said. ‘I’m leaving, because with such a privileged role comes responsibility. The responsibility to know when you are the right person to lead and also when you are not. I know what this job takes. And I know that I no longer have enough in the tank to do it justice. It’s that simple.’ She said her term as prime minister will conclude no later than 7 February, in the video published on Jan 18, 2023, by Guardian News, as “Jacinda Ardern resigns as prime minister of New Zealand in shock announcement“, below:

For  more about Jacinda Ardern, please refer to the excerpt from wikipedia, in italics, below:

Jacinda Kate Laurell Ardern[1] (/dʒəˈsɪndə ɑːrˈdɜːrn/ jə-SIN-də ar-DURN;[2] born 26 July 1980) is a New Zealand politician who has served as the 40th prime minister of New Zealand and leader of the Labour Party since 2017. A member of the Labour Party, she has been the member of Parliament (MP) for Mount Albert since 2017.[3] On 19 January 2023, Ardern announced she would resign as Labour leader and prime minister by 7 February, pending a leadership election.[4][5][6]

Born in Hamilton, Ardern grew up in Morrinsville and Murupara. She joined the Labour Party at the age of 17. After graduating from the University of Waikato in 2001, Ardern worked as a researcher in the office of Prime Minister Helen Clark. She later worked in London as an adviser in the Cabinet Office during Tony Blair’s premiership. In 2008, Ardern was elected president of the International Union of Socialist Youth. Ardern was first elected as an MP in the 2008 general election, when Labour lost power after nine years. She was later elected to represent the Mount Albert electorate in a by-election on 25 February 2017.

Ardern was unanimously elected as deputy leader of the Labour Party on 1 March 2017, after the resignation of Annette King. Exactly five months later, with an election due, Labour’s leader Andrew Little resigned after a historically low opinion polling result for the party, with Ardern elected unopposed as leader in his place.[7] Labour’s support increased rapidly after Ardern became leader, and she led her party to gain 14 seats at the 2017 general election on 23 September, winning 46 seats to the National Party‘s 56.[8] After negotiations, New Zealand First chose to enter a minority coalition government with Labour, supported by the Green Party, with Ardern as Prime Minister. She was sworn in by the Governor-General on 26 October 2017.[9] She became the world’s youngest female head of government at age 37.[10] Ardern gave birth to her daughter on 21 June 2018, making her the world’s second elected head of government to give birth while in office (after Benazir Bhutto).[11]

Ardern describes herself as a social democrat and a progressive.[12][13] The Sixth Labour Government has faced challenges from the New Zealand housing crisis, child poverty, and social inequality. In March 2019, in the aftermath of the Christchurch mosque shootings, Ardern reacted by rapidly introducing strict gun laws, winning her wide recognition.[14] Throughout 2020 she led New Zealand’s response to the COVID-19 pandemic, for which she won praise for New Zealand being one of the few Western nations to successfully contain the virus.[15] Ardern moved the Labour Party further to the centre towards the October 2020 general election, promising to cut spending during the remainder of the COVID-19 recession.[16] She led the Labour Party to a landslide victory, gaining an overall majority of 65 seats in Parliament, the first time a majority government had been formed since the introduction of a proportional representation system in 1996.[17][18][19]

To find out some of Jacinda Ardern’s positions, please view videos below:

New Zealand Prime Minister Jacinda Ardern outlines what her country’s government did to enact sensible gun control after a terrible mass shooting in Christchurch. Stick around for two more segments with friend of the show, PM Jacinda Ardern!, in the video published on May 25, 2022, by THe Late Show with Stephen Colbert, as ““We iIll Buy Them Back And We Will Destroy Them” – PM Jacinda Ardern ON Gun Control In New Zealand”, below:

“I know what this job takes, and I know that I no longer have enough in the tank to do it justice”, in the video published on Jan 19, 2023, by Channel 4 News, as “Jacinda Ardern: New Zealand PM steps down after burnout“, below:

‘What words adequately express the pain and suffering of 50 men, women and children lost, and so many injured?’ asked New Zealand prime minister Jacinda Ardern during her address at a memorial service for the Christchurch victims. ‘I thought there were none. And then I came here and was met with this simple greeting. As-salaam Alaikum. Peace be upon you.’ She says those words ‘have left us humbled, and they have left us united. Adern was speaking at the National Remembrance Service in North Hagley Park in Christchurch, New Zealand to remember the 50 people killed in the Christchurch mosque shootings on 15 March, in the video published on March 28, 2019, by Guardian News, as “Jacinda Ardern’s full Christchurch speech: ‘Let us be the nation we believe ourselves to be’“, below: