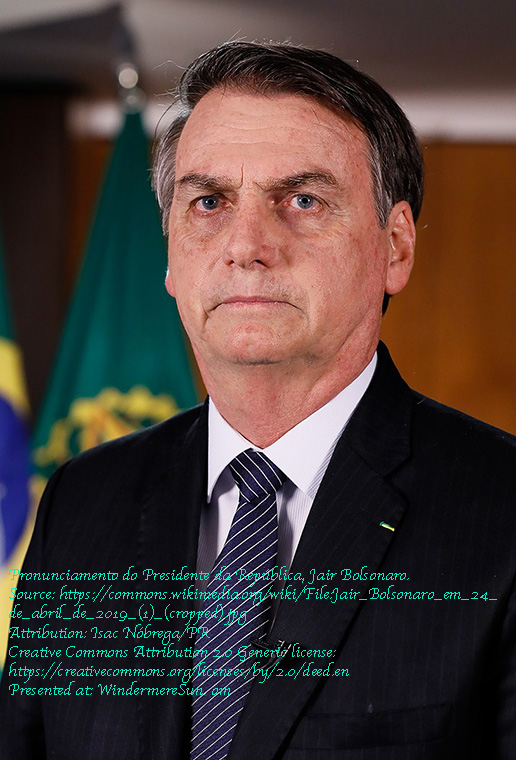 Supporters of former Brazilian president Jair Bolsonaro who refuse to accept his loss in the recent presidential election stormed government buildings in the country’s capital Sunday, just a week after the inauguration of President Luiz Inacio Lula da Silva, in the video published on Jan 8, 2023, by CBC News: The National, as “Bolsonaro supporters storm Brazil’s Congress“, below:

Please refer to excerpt from wikipedia, in italics, below:

On 8 January 2023, following the victory of Luiz Inácio Lula da Silva in the 2022 Brazilian general election, supporters of the previous president, Jair Bolsonaro, attacked the Supreme Court of Brazil, the National Congress of Brazil, and the Planalto Presidential Palace in the Praça dos Três Poderes in Brasília, the federal capital. Veneziano Vital do Rêgo [pt], acting president of the Federal Senate, confirmed that protestors had breached the Chamber of Deputies‘s Green Hall and attempted to invade the Planalto Palace. President Lula was not in Brasília at the time of the attack.[10][11][12]

The attack occurred a week after Lula’s inauguration and followed several weeks of unrest from Bolsonaro’s supporters. The Supreme Court, Congress, and Presidential Palace were reported as cleared later that evening.[13] It drew swift condemnations from governments around the world. At 18:00 BRT (UTC−03:00), Lula announced that he had signed a decree authorizing a federal state of emergency in the Federal District through the end of January.[14] Congress will convene in an emergency meeting to vote on the decision, as the legislature was not in session.[15][16]

Bolonsaro arrived in Florida before his term ended, where he currently resides. [300] During the 2023 Praça dos Três Poderes attack, when supporters of his stormed the Praça dos Três Poderes, including the Supreme Court of Brazil, National Congress of Brazil and the Planalto Presidential Palace, he was blamed for this in a press conference by Lula.[301] Bolsonaro eventually condemned the protesters in a tweet[302] and denied responsibility.[303]

In the video published on Jan 8, 2023, by WGN News, as “Pro-Bolsonaro crowd storms Brazil’s Congress, other sites“, below:

Supporters of former Brazilian president Jair Bolsonaro who refuse to accept his electoral defeat stormed Congress, the Supreme Court, and the presidential palace in the capital on Sunday. The incident has drawn comparisons to the storming of the U.S. Capitol on Jan. 6, 2021, something many political analysts and the judiciary have warned about for months, in the video published on Jan 8, 2023, by CBC News, as “How the storming of Brazil’s Congress compares to U.S. Capitol Hill riots“, below:

Reuters footage shows police facing off against supporters of Brazil’s ousted far-right President Jair Bolsonaro after they invaded the Congress. Other groups attempted to take the presidential palace and Supreme Court, in the video published on Jan 8, 2023, by Reuters, as “Chaotic scenes from Brazil’s capital“, below: