Will Neom, The Mirror Line Of Saudi Arabia, Be The City Of The Future? 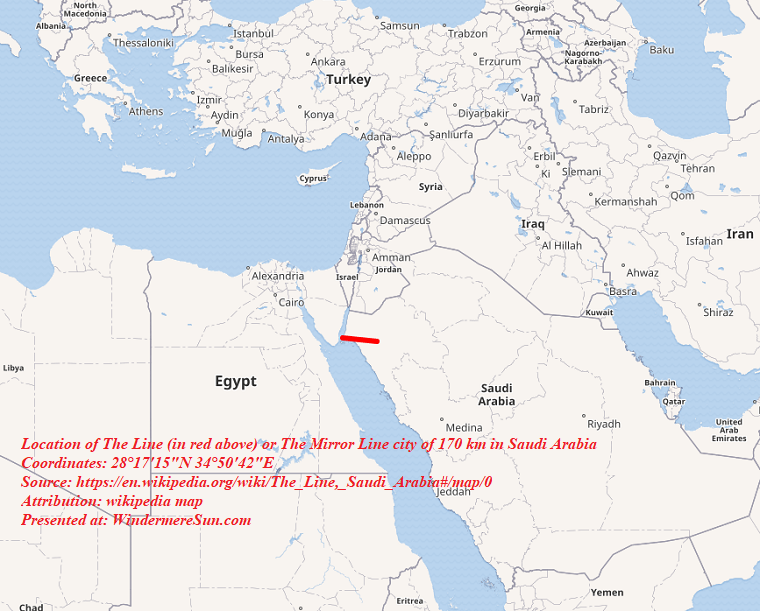 Saudi Arabia has just unveiled its plans for the biggest construction project ever. The Mirror Line is supposed to be 500 meters tall and incredible 170 kilometers long. But why do they propose such insane plans? Can they really make it happen? Or are there other intentions behind it. Let’s find out in the video published on Sep 25, 2022, by Top Luxury, as “Saudi Arabia’s  $1 Trillion Skyscraper“, below:

For more about The Line of Saudi Arabia, please refer to the excerpt from wikipedia, in italics, below:

The Line (Arabic: ذا لاين) is a smart, linear city under construction in Saudi Arabia in Neom, Tabuk Province, which is designed to have no cars, streets or carbon emissions.[2][3][4][5] The 170-kilometre-long (110 mi) city is part of Saudi Vision 2030 project, which Saudi Arabia claims will create 460,000 jobs and add $48 billion to the country’s GDP.[2] The Line is planned to be the first development in Neom, a $500 billion project.[6][7] The city’s plans anticipate a population of 9 million.[8] Excavation work had started along the entire length of the project by October 2022.

The project has faced criticism over its impact on the environment and the current population of the area, as well as doubts about its technological and economic viability.

It is official! Construction work has begun on the controversial mirrored linear megacity called The Line, which is part of Saudi Arabia’s most ambitious project; Neom City. A Recent video that surfaced on social media shows numerous excavators digging a wide linear trench in the vast desert. When the project was initially announced in 2017, People were convinced that this is just a utopian fantasy project that would never get built, but fast forward to today, the work on this futuristic megacity is now underway, in the video published on Nov. 1, 2022, by Billion Dollar Builds, as “Construction Begins On The Line Megacity. It’s Actually Happening!“, below:

In 2021, Saudi Crown Prince Mohammed bin Salman revealed the country’s plans to build The Line, a smart linear city that will be constructed vertically, have no roads or cars and run purely on renewable energy. Now, the Saudi government has released image renders of what The Line could look like once it’s done. The city was designed to only be 200 meters (656 feet) wide, but 500 meters (1,640 feet) tall and 170 kilometers (105 miles) long. It will house multiple communities encased in a glass facade running along the coast and will eventually be able to accommodate up to 9 million residents. The Line’s designers envision a city wherein facilities are just a five-minute walk away from people and where residents can organically bump into each other as they go about their daily errands. While it will have no roads and won’t be able to accommodate cars, it will have a high-speed rail for end-to-end transit that will take 20 minutes. It will also rely on a natural ventilation system to make sure residents enjoy the ideal climate all year round. The Line is part of Saudi’s $500 billion Neom mega-city project being built in the country’s Tabuk Province. It’s a divisive initiative that’s been beset with controversy from the time it started, because around 20,000 people will be forced to relocate by its construction. The controversies surrounding Neom had compelled Riot Games to quickly go back on its decision to enter a sponsorship agreement with the mega-city project. Neom was supposed to be a main partner for Riot’s LEC esports championship in Europe two years ago until backlash from fans caused the company to end the sponsorship deal a mere 24 hours later, in the video published on July 27, 2022, by Engadget, as “Saudi Arabia’s controversial mega-city project: The Line“, below:

In the video published on March 3, 2021, by neo, as “Why Saudi Arabia Is Building a Linear City“, below:

The Line is an astonishing smart linear city proposed to be built within Saudi Arabia’s Neom Megacity. This city of the future looks like something straight out of a sci-fi movie. Saudi Arabia’s crown prince Mohammed Bin Salman announced the plan for this smart city as part of a rebrand plan called Saudi Vision 2030, to reshape the kingdom’s economy. Join us today, as we explore this extraordinary upcoming megaproject that will eclipse every other megacity construction in the world, in the video published on Aug. 7, 2022, by Billion Dollar Builds, as “Inside The Mirrored Skyscraper Megacity In The Desert“, below: