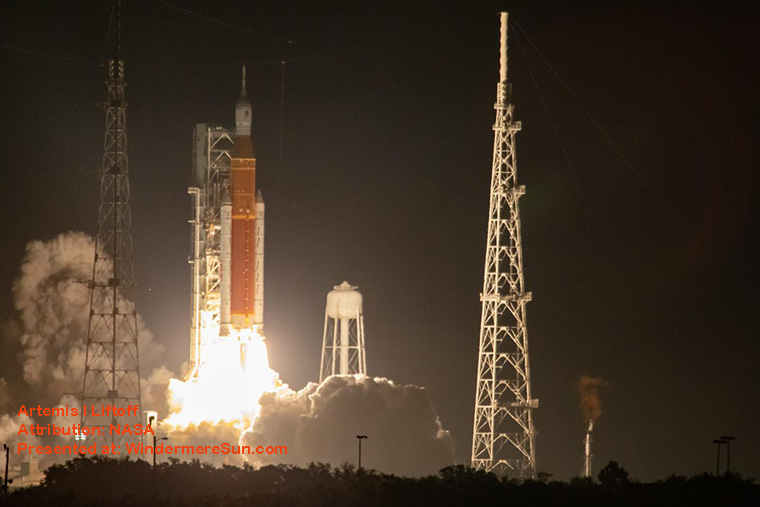 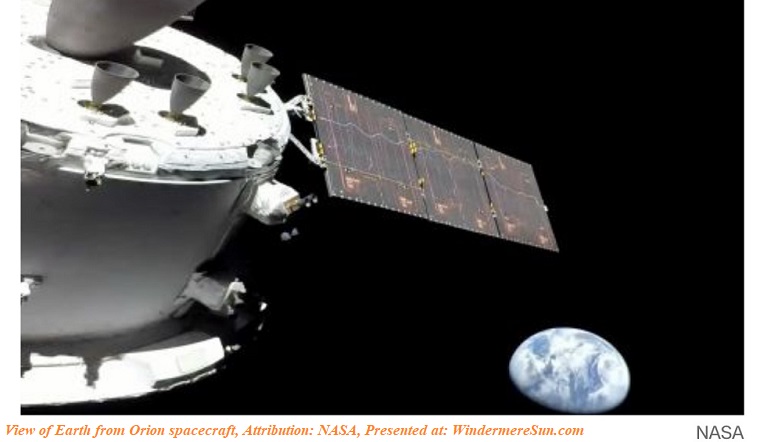 View of Earth from Orion spacecraft more than 9 hours after launch (Attribution: NASA, Presented at: WindermereSun.com)

NASA has successfully launched the Artemis I mission on a 26-day uncrewed test flight of the SLS rocket and Orion capsule. Orion will journey to the moon and remain in orbit for several weeks, in the video published on Nov. 16, 2022, by MSNBC, as “WATCH: NASA Launches Artemis I Mission In Return To The Moon“, below:

For more details about Artemis 1, please refer to excerpt from wikipedia, in italics, below:

Artemis 1, officially Artemis I,[6] is an ongoing uncrewed Moon-orbiting mission, the first spaceflight in NASA‘s Artemis program, and the first flight of the agency’s Space Launch System (SLS) rocket and the complete Orion spacecraft.[note 1] Artemis 1 was successfully launched from Kennedy Space Center on 16 November 2022 at 1:47:44 am EST (6:47:44 UTC).[7][2][8][9]

Formerly known as Exploration Mission-1 (EM-1),[10] the mission was renamed following the creation of the Artemis program. The mission lifted off from Launch Complex 39B at the Kennedy Space Center aboard the Space Launch System rocket. The Orion spacecraft has been launched on a mission of between 26 and 42 days,[11] with at least 6 of those days in a distant retrograde orbit around the Moon.[11] After reaching Earth orbit and performing a trans-lunar injection (burn to the Moon), the mission will deploy ten CubeSat satellites. The Orion spacecraft will later enter a distant retrograde orbit for six days. The Orion spacecraft will then return and reenter the Earth’s atmosphere, protected by its heat shield, and splash down in the Pacific Ocean. The mission will certify Orion and the Space Launch System for crewed flights beginning with Artemis 2.[12] After the Artemis 1 mission, Artemis 2 will perform a crewed lunar flyby and Artemis 3 will perform a crewed lunar landing, five decades after the last lunar Apollo mission.

The Orion spacecraft for Artemis 1 was stacked on 20 October 2021, marking the first time a super-heavy-lift vehicle has been stacked inside NASA’s Vehicle Assembly Building (VAB) since the final Saturn V in 1973. On 17 August 2022, the fully stacked vehicle was rolled out for launch, after a series of delays caused by difficulties in pre-flight testing. The first two launch attempts were canceled, due to faulty reading on 29 August 2022, and a hydrogen leak during fueling on 3 September 2022, respectively.[13]

NASA launched its first return to the moon in over 50 years. The Artemis I Moon Rocket launched from NASA’s Kennedy Space Center in Florida on Nov. 16 at 1:49 a.m. Eastern time, in the video published on Nov. 16, 2022, by KTLA 5, as “NASA launches Artemis I rocket to the moon“, below:

NASA Space Launch System rocket launched the Artemis 1 mission on Nov. 16, 2022. The rocket lifted off from Launch Complex 39B at the Kennedy Space Center in Florida. Full Story: https://www.space.com/nasa-artemis-1-… in the video published on Nov. 16, 2022, by VideoFromSpace, as “Blastoff! NASA’s Artemis 1 moon rocket launches on historic first mission“, below:

The Artemis 1 moon rocket, the most powerful ever built for NASA, finally blasted off at 1:47 a.m. ET on Wednesday. If all goes well with Artemis 1, NASA plans to launch a second SLS rocket in late 2024 to boost four astronauts on a looping free-return trajectory around the moon, in the video published on Nov. 16, 2022 , by CBS News, as “NASA launches Artemis 1 rocket on mission to the moon | full video“, below:

NASA remained on track for Wednesday’s planned liftoff of its new Artemis moon rocket, after determining that hurricane damage provided little extra risk to the test flight. Hurricane Nicole’s high winds caused a 10-foot section of caulking to peel away near the crew capsule at the top of the rocket last Thursday. The material tore away in small pieces, rather than one big strip, said mission manager Mike Sarafin, in the video published on Nov. 15, 2022, by KHOU 11, as “Artemis 1 live stream: Live coverage of moon rocket launch“, below:

Watch live as our mega Moon rocket launches an uncrewed Orion spacecraft on a 26-day mission around the Moon and back to Earth. NASA is targeting Wednesday, Nov. 16, for the launch of the Artemis I Moon mission during a two-hour launch window that opens at 1:04 a.m. EST (0604 UTC). During #Artemis I, Orion will lift off aboard the Space Launch System (SLS) rocket, and travel 280,000 miles (450,000 km) from Earth and 40,000 miles (64,000 km) beyond the far side of the Moon, carrying science and technology payloads to expand our understanding of lunar science, technology developments, and deep space radiation. Through Artemis missions, NASA will land the first woman and the first person of color on the Moon, paving the way for a long-term lunar presence and serving as a steppingstone to send astronauts to Mars, in the video published on Nov. 16, 2022, by NASA, as “Artemis I Launch to the Moon (Official NASA Broadcast) – Nov. 16, 2022“, below: