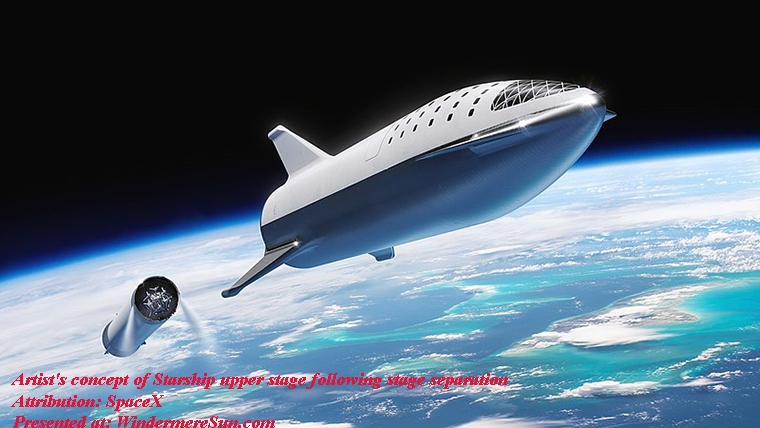 NASA officially revealed that New Starship’s first orbital flight test will be in December of 2022, pending test and regulatory approvals, while Elon Musk is hoping to see the first launch in November of 2022, in the video published by ALPHA TECH, on Nov 1, 2022, as “NASA officially revealed New Starship’s first orbital flight timeline…but can’t launch before SLS“, below:

NASA official mentioned in the video above, Mark Kirasich, is the Deputy Associate Administrator for Artemis Campaign Development.

For more details about the SpaceX Starship, please refer to the excerpt from wikipedia, in italics, below:

Starship is a fully-reusable, super-heavy-lift launch vehicle being developed by American aerospace company SpaceX, projected to be the most powerful launch vehicle ever built, as well as the first to demonstrate full reusability.[1] The Starship system consists of the Super Heavy first-stage booster and the Starship[a] second stage, which serves as a self-contained spacecraft while in orbit. Both stages are powered by Raptor engines, which burn liquid oxygen and liquid natural gas propellants in a highly efficient full-flow staged combustion power cycle. Both stages are designed for rapid reuse — the Super Heavy booster performs a boostback to return to the launch site for a vertical landing, while Starship is equipped with a ceramic-tile heat shield to withstand atmospheric reentry for a landing at the launch site.[b]

Starship has a payload capacity of 100 t (220,000 lb) to low Earth orbit in its fully reusable configuration, and is designed for a high flight rate in order to dramatically reduce the cost of space access. Expected applications include satellite launch, including the deployment of a large portion of SpaceX’s next-generation Starlink internet constellation; human spaceflight such as space station crew transport, space tourism, and transport of passengers to Mars; and point-to-point suborbital passenger spaceflight. Once in orbit, the Starship spacecraft can additionally be refueled by Starship propellant tankers before transiting to higher energy destinations such as the Moon and Mars.

Conceptual designs of a heavy-lift launch vehicle at SpaceX began as early as 2005, with methane fuel being specified in 2012 and the vehicle’s stainless steel primary structure in 2019. Starship’s development program adopted an iterative and incremental methodology, meaning frequent ‘hardware-rich’ prototype construction, testing, and refinement. Notable milestones in the program include the first flight of a full-flow staged combustion engine (Raptor) in 2019 and demonstration of control authority during suborbital flight tests in early 2021. A full-scale orbital test flight is expected to take place in late 2022.[2] SpaceX is additionally developing Starship HLS, a crewed lunar lander that as part of NASA’s Artemis program will transport astronauts to the Moon in 2025.

We have never been closer to the space company’s long-awaited first test launch into space. It’s also the best-ever look we’ve had at SpaceX’s vision for the future of space exploration — and space-based, long-haul transportation. To build a fully reusable launch system for its interplanetary starship vehicle, SpaceX has had to solve many technical challenges. As slowing the massive spacecraft down, as it re-enters earth’s atmosphere near orbital velocities. But perhaps the biggest challenge as always with rockets, is fairly mundane its mass, the goal with a rocket is to build the lightest possible vehicle, with the greatest amount of performance. In theory it sounds simple, but in practice containing volatile liquids at high pressures, is anything but simple and with a fully reusable launch system, in the video published on Oct 31, 2022, by Science…, as “SpaceX UPGRADE Starship Launch Mount Before First Orbital Launch!“, below:

In the video published by ALPHA TECH, as “SpaceX’s About To Launch Starship Super heavy S24/B7 To Orbit from Texas…Musk confirmed“, below:

Elon Musk, SpaceX founder and chief engineer, shared on September 21, 2022, via Twitter, with regard to the debut orbital launch, in italics, “Late next month maybe, but November seems highly likely. We will have two boosters & ships ready for orbital flight by then, with full stack production at roughly one every two months…“. Musk also shared on September 20, 2022, via Twitter, in italics, “Booster 7 now returns to high bay for robustness upgrades & booster 8 moves to pad for testing…Next big test is probably full stack wet dress rehearsal, then 33 engine firing in a few weeks.”