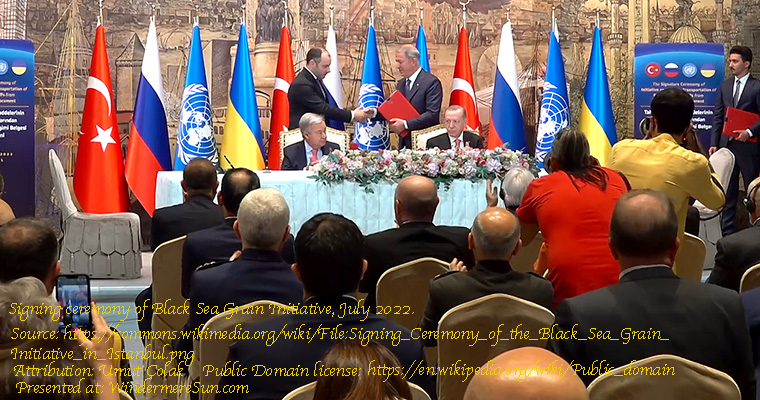 Ukraine has carried out a “massive” drone attack on the Black Sea Fleet in the Crimean port city of Sevastopol (Sevastopol is the largest city in Crimea, which Russia annexed from Ukraine in 2014), damaging one warship. Russia has suspended participation in a U.N.-brokered Black Sea grain deal after what it said was a major Ukrainian drone attack on its fleet in Crimea, dealing a blow to attempts to ease the global food crisis. Russia has said, in the video published by BBC News, on Oct 29, 2022, as “‘Massive’ drone attack on Black Sea Fleet, Russia says – BBC News“, below:

Russia’s black sea fleet came under attack in Sevastopol. Moscow said, the attack was carried out under guidance of British specialists and UK helped Ukraine in planning the attack, in the video published on Oct 29, 2022, by WION, as “Ukraine war: ‘Massive’ drone attack in Crimea; Russia blames Ukraine, UK | World News| WION“, below

Russia has suspended participation in a U.N.-brokered Black Sea grain deal after what it said was a major Ukrainian drone attack on its fleet in Crimea, dealing a blow to attempts to ease the global food crisis, in the video published on Oct 29, 2022, by Hindustan Times, as “Russia suspends Ukraine grain exports;Fallout of failed drone attack on Black Sea fleet“, below:

Russia says it has moved to suspend its implementation of a UN-brokered grain export deal which has seen more than nine million tons of grain exported from Ukraine and brought down global food prices. Russia has accused the United Kingdom of helping Ukraine plan a drone attack on its Black Sea Fleet in the Crimean port of Sevastopol. Al Jazeera’s Harry Fawcett reports from Kyiv, Ukraine and Al Jazeera’s Resul Serdar reports from Istanbul, Turkey, in the video published by Al Jazeera English, on Oct 29, 2022, as “Russia suspends UN-sponsored Ukraine grain deal“, below:

Russia says it is pulling out of the deal allowing exports of grain from Ukraine, after claiming ships from its Black Sea Fleet were attacked in the occupied Crimean port of Sevastopol, in the video published on Oct 29, 2022, by Channel 4 News, as “Russia says navy hit by ‘massive’ Ukraine boat drone attack“, below:

The Russian foreign ministry said it is suspending its participation in the United Nations-brokered grain deal with Ukraine for an “indefinite period of time,” tying the decision to an alleged drone attack in Crimea on Saturday, in the video published on Oct 29, 2022, by CNN, as “Russia suspends participation in Ukraine grain deal indefinitely“, below: