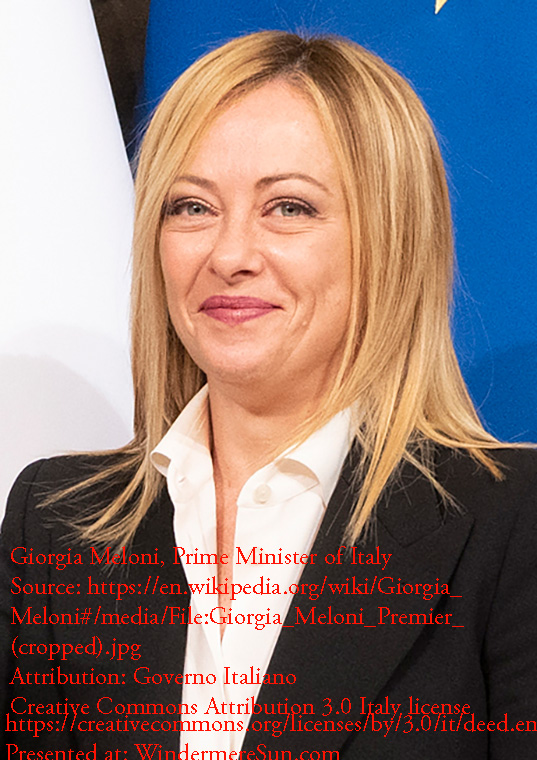 The new Italian Prime Minister, Giorgia Meloni, addressed Italy’s parliament for the first time, before obtaining a vote of confidence from the parliament. Her government is credited as being the most right-wing in the country’s republican history. She pledged to continue Italy’s support of Ukraine and distanced herself from any fascist ideology, in the video published on Oct 26, 2022, by BBC News, as “Italian PM Giorgia Meloni pledges to lead Italy through ‘turbulent times’ in debut speech – BBC News“, below:

Giorgia Meloni, Italy’s first woman prime minister, vowed on Tuesday to steer the country through some of the hardest times since World War Two and to maintain support for Ukraine in its conflict with Russia, in the video published by Reuters, on Oct 25, 2022, as “Italian PM Meloni sees tough times, denounces Russian ‘blackmail’“, below:

Giorgia Meloni formally took over from Mario Draghi as the head of Italy’s government Sunday. Bloomberg’s Alessandro Speciale examines the economic and policy challenges Meloni faces as prime minister on Bloomberg Television, in the video published on Oct 24, 2022, by Bloomberg Markets and Finance, as “Italy’s Meloni Sworn In as Nation’s First Female PM“, below:

Italians have chosen their first far-right government since World War II. Giorgia Meloni is expected to become the first female prime minister to lead Europe’s third largest economy. Her party, Brothers of Italy, draws its roots from the country’s fascist history. Monday, she sounded a moderate tone, but as Nick Schifrin reports, her recent rhetoric has many in Italy and Europe concerned, in the video published on Sep 26, 2022, by PBS NewsHour, as “Right-wing victory in Italian election raises concerns across Europe“, below:

To learn more about Giorgia Meloni, please refer to the excerpt from wikipedia, in italics, below:

Giorgia Meloni (Italian pronunciation: [ˈdʒordʒa meˈloːni]; born 15 January 1977) is an Italian politician who has been serving as the prime minister of Italy since 22 October 2022, the first woman to hold this position. A member of the Chamber of Deputies since 2006, she has led the Brothers of Italy (FdI) political party since 2014, and she has been the president of the European Conservatives and Reformists Party since 2020.

In 1992, Meloni joined the Youth Front, the youth wing of the Italian Social Movement (MSI), a neo-fascist political party founded in 1946 by former followers of Italian fascist dictator Benito Mussolini. She later became the national leader of Student Action, the student movement of the National Alliance (AN), a post-fascist party that became the MSI’s legal successor in 1995 and moved towards national conservatism. She was a councillor of the Province of Rome from 1998 to 2002, after which she became the president of Youth Action, the youth wing of AN. In 2008, she was appointed Italian Minister of Youth in the Berlusconi IV Cabinet, a role which she held until 2011. In 2012, she co-founded FdI, a legal successor to AN, and became its president in 2014. She unsuccessfully took part in the 2014 European Parliament election and the 2016 Rome municipal election. After the 2018 Italian general election, she led FdI in opposition during the entire 18th Italian legislature. FdI grew its popularity in opinion polls, particularly during the management of the COVID-19 pandemic in Italy by the Draghi Cabinet, a national unity government to which FdI was the only opposition party. Following the fall of the Draghi government, FdI won the 2022 Italian general election.

A right-wing populist and nationalist, her political positions have been described as far right, which she rejects. She describes herself as a Catholic Christian and a conservative, and she claims to defend “God, fatherland, and family”. She is opposed to abortion, euthanasia, same-sex marriage, and LGBT parenting, saying that nuclear families are exclusively headed by male–female pairs. Her discourse includes criticism of globalism and femonationalist rhetoric. Opposed to the reception of non-Christian migrants and multiculturalism, Meloni supports a naval blockade to halt immigration, and she has been accused of xenophobia and Islamophobia; she has blamed neo-colonialism as a cause behind the European migrant crisis. A supporter of NATO, she maintains Eurosceptic views regarding the European Union, which she describes as Eurorealist, and was in favour of better relations with Russia before the 2022 Russian invasion of Ukraine, which she condemned, pledging to keep sending arms to Ukraine.

Meloni has expressed controversial views, such as praising Mussolini when she was 19. In 2020, she praised Giorgio Almirante, a civil minister in Mussolini’s Italian Social Republic who produced racist propaganda and co-founded the MSI. Nevertheless, Meloni has said that she and her party condemn both the suppression of democracy and the introduction of the Italian racial laws by the fascist regime.