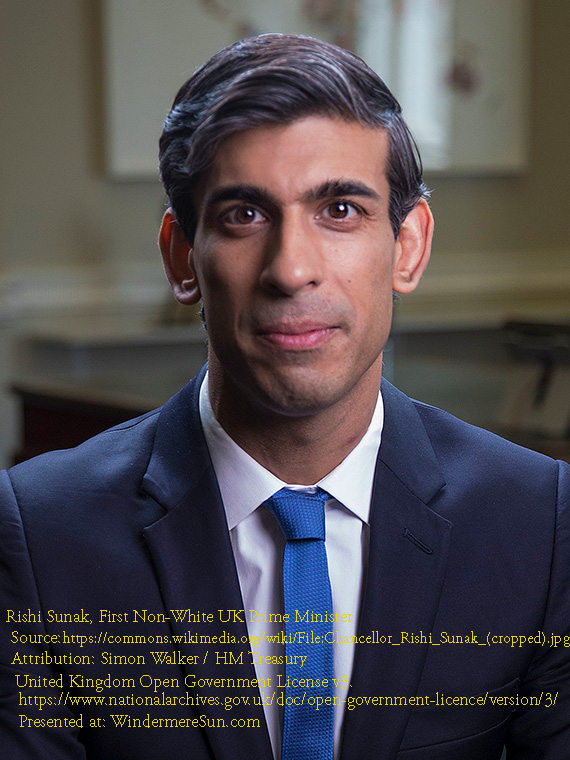 After having had 3 UK prime ministers in less than 2 months and 4 finance ministers in 4-5 months, the first non-white, youngest, wealthiest, and Hindi United Kingdom Prime Minister, Rishi Sunak, is expected to be appointed by King Charles III on Oct 25, 2022, to take on a very volatile time in UK. PM Sunak will need to address stability issue of post-Brexit UK to bring forth the vision of the future of UK.

For more details about this change, please refer to the excerpt from wikipedia, in italics, below:

As Chancellor, Sunak was prominent in the government’s financial response to the COVID-19 pandemic and its economic impact, including the Coronavirus Job Retention and Eat Out to Help Out schemes. He resigned as chancellor on 5 July 2022, followed by Johnson’s resignation amid a government crisis. Sunak stood in the Conservative party leadership election to replace Johnson,[6] and lost the members’ vote to Liz Truss.[7]Following Truss’s resignation amid another government crisis, Sunak was elected unopposed as Leader of the Conservative Party.[8] Sunak is expected to be appointed Prime Minister by King Charles III on 25 October, upon which he will become the first British South Asian, the first non-white person and the richest person to have held the office.

Rishi Sunak is set to become the first Indian-origin Prime Minister of the United Kingdom. Conservative MP Penny Mordaunt dropped out of the race after failing to secure the support of the required number of MPs to stay in contention for the top government post, in the video streamed on Oct 25, 2022, by India Today, as “Rishi Sunak LIVE In UK Parliament| Rishi Sunak’s Speech In Parliament|Rishi Sunak News“, below:

Rishi Sunak became the new leader of Britain’s conservative party and is now set to be the new prime minister. He’ll follow Liz Truss, a fellow conservative who resigned last week, after only 45 days in office. Hers was the shortest term for a prime minister in UK history. But it was long enough to push the economy to the edge of a cliff. The mini budget Liz Truss proposed rattled financial markets and sent the pound plummetting and forced the Bank of England to intervene. While markets were spooks and shocked, Rishi Sunak was not. In September, when he ran against against Liz Truss to be party leader and prime minister, he warned that Truss’s economic plans were too risky. And he was right, in the video published by DW News, as “What does new British PM Rishi Sunak mean for the rest of the world?| DW News“, below:

Britain has a new prime minister—again. Rishi Sunak inherits a mountain of problems. The Economist’s Britain editor assesses the challenges Mr Sunak faces, in the video published by The Economist, as “Rishi Sunak: what challenges await Britain’s new PM?” below: