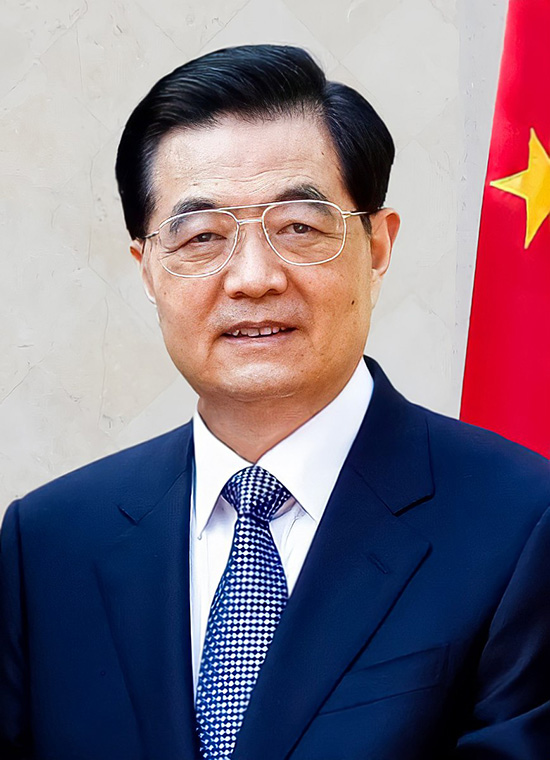 Chinese former leader Hu Jintao has been led out of the closing ceremony of the Communist Party Congress. The 79-year-old was sitting beside Chinese President Xi Jinping when he was approached and led away by officials. No explanation was given. After its week-long congress, the party is expected to confirm Mr Xi, 69, for a historic third term. The event, held in Beijing every five years, cemented his position as China’s most powerful leader since Mao Zedong, in the video published on Oct 22, 2022, by BBC News, as “Chinese ex-president Hu Jintao escorted out of congress – BBC News“, below:

Former Chinese president Hu Jintao was unexpectedly led out of Saturday’s closing ceremony of the Communist Party Congress in a dramatic moment that disrupted the highly choreographed event. Hu’s departure was left unexplained, and the nation’s censors appeared to quickly scrub any recent references to him from the internet. The frail-looking 79-year-old seemed reluctant to leave the front row of proceedings at Beijing’s Great Hall of the People, where he was sitting next to President Xi Jinping. A steward attempted to take a sitting Hu by the arm before being shaken off. The steward then attempted to lift Hu up with both hands from under the armpits. After an exchange of about a minute, in which Hu spoke briefly with Xi and Premier Li Keqiang, he was led out of the hall. A seated Xi was filmed holding papers down on the desk as Hu tried to grab them. Hu patted Li’s shoulder as he left, as most of his colleagues stared firmly ahead. The week-long Congress occurred mostly behind closed doors, but Hu’s departure occurred shortly after journalists were allowed in to cover the closing ceremony, in the video published by The Telegraph, on Oct 22, 2022, as “Former Chinese President Hu Jintao escorted out of party congress“, below:

Former Chinese leader Hu Jintao was escorted out of the closing ceremony of Saturday’s Communist Party Congress in Beijing. CNN’s Beijing Bureau Chief Steven Jiang has more, in the video published on Oct 22, 2022, by CNN, as “China’s censors blocked CNN while reporting this surprising moment“, below:

China Latest News: Two days before Chinese President Xi Jinping was reappointed for a third term on October 16, a man strung up protest banners on a bridge in Beijing calling for Xi’s removal. The banner which criticized the strict lockdowns and restrictions that have defined Xi’s zero-Covid policy has now triggered a slew of protests within China and across the globe. According to a report by Bloomberg, VoiceofCN — a group of anonymous Chinese nationals who run a pro-democracy Instagram account — said the slogans calling for Xi’s removal have cropped up in at least eight cities in China. These eight cities include Shenzhen, Shanghai, Beijing and Guangzhou, as well as Hong Kong. An administrator for VoiceofCN also said the group received several submissions showing the slogans from mainland China. Interestingly, these slogans were mostly seen inside bathrooms or posted on noticeboards in schools, in the video published on  Oct 22, 2022, by India Today, as “Former Chinese President Hu Jintao Unexpectedly Led Out Of Party Congress“, below:

Chinese president XI Jinping has cemented his grip over the Communist party by passing an amendment which would enshrine his ideas and status in the party’s constitution. The move by Xi elevates his status in the party where he is expected to get a mandate for a precedent breaking third term as president in March. He closed the congress with a call to the people of China to remain confident in their ‘history, exhibit greater historical initiative, and have the courage to fight and the mettle to win.’ During the congress, was also unexpectedly escorted out of Beijing’s Great Hall of the People. Hu, who preceded Xi was sat next to him throughout the ceremony until he suddenly got up and was reluctantly pulled away. He appeared to want to squeeze in a last a last word with Xi before he tapped outgoing premier Li Keqiang and left the hall. His departure as not been explained, in the video published on Oct 22, 2022, by Guardian News, as “China: Xi passes amendment enshrining his status in constitution as Hu Jintao escorted out of hall“, below:

Sky News host Rowan Dean says footage has emerged of the predecessor of China’s President Xi Jinping being “escorted out” of the closing session of the Communist Party Congress, in the video published on Oct 22, 2022, by Sky News Australia, as “‘Sinister’: Xi’s predecessor ‘escorted out’ of Party Congress session“, below:

The predecessor of China’s President Xi Jinping was basically “bundled out” of the closing session of the Communist Party Congress, former DFAT Australia-China Council scholar Andrew Phelan says. Former Chinese president Hu Jintao was seated next to Mr Xi during the event before he was ushered out of his seat by officials halfway through proceedings. “It was extraordinary to witness,” Mr Phelan told Sky News Australia. “He was the paramount leader for 10 years prior to Xi Jinping.” in the video published on Oct 23, 2022, by Sky News Australia, as “‘Extraordinary: Xi’s predecessor ‘bundle out’ of Party Congress session“, below:

Speculation has been swirling since former Chinese President Hu Jintao was escorted out from the closing session of China’s twice a decade Communist Party’s Congress on Saturday (Oct 22), which saw Mr Hu’s successor, Xi Jinping secure an unprecedented third term at the helm. CNA’s cameras captured the moments just prior to Mr Hu’s departure, which took place soon after local and foreign media were allowed to enter the auditorium to cover proceedings around 11.15am. It came shortly after Chinese state media announced that delegates had elected a new Central Committee and Central Commission for Discipline Inspection, which media were not allowed into the hall to witness. Current chairman of China’s legislature Li Zhanshu is seen taking papers out of Mr Hu’s hand, before a man comes to speak to him and escorts him out. Following Mr Hu’s departure, proceedings continued with delegates voting on other items on the agenda including an amendment to the party’s constitution. Addressing the incident later that night, Chinese state media attributed the incident to health reasons. In a tweet written in English, Xinhua said that Mr Hu was “not feeling well” during the session and for his health, staff had accompanied to a room next to the meeting venue “for a rest”. Mr Hu’s name was censored from Chinese social media, in the video published on Oct24, 2022, by CNA, as “Rare look: Moments before former Chinese President Hu Jintao was escorted out of Party Congress“, below: