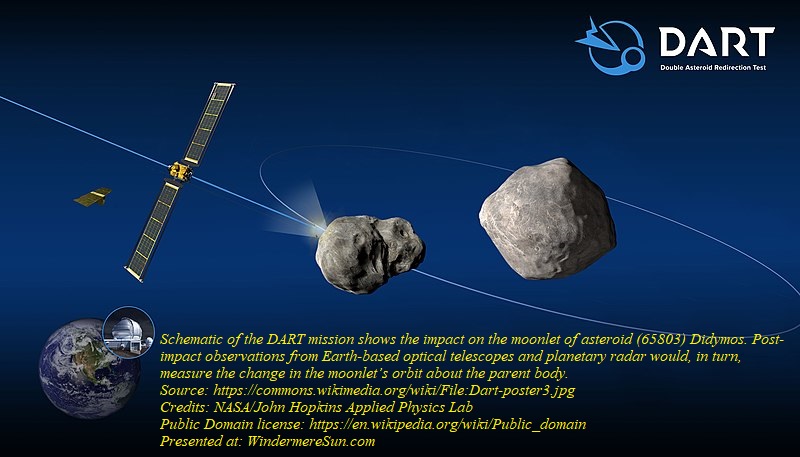 Countdown to impact as NASA’s Double Asteroid Redirection Test (DART) attempts humanity’s first-ever test of planetary defense! The DART spacecraft will intentionally crash into asteroid Dimorphos at 7:14 p.m. ET on Monday, September 26, 2022 to see if kinetic force can change its orbit. Why? If this test is successful, the same technique could be used to deflect an Earth-threatening asteroid in the future, should one ever be discovered, in the video published on Sep 26, 2022, by  NASA, as “DART’s Impact with Asteroid Dimorphos (Official NASA Broadcast)“, below:

DART is a global effort of planetary defense technique that may one day save humanity.

For more details about DART, please refer to the excerpt from wikipedia, in italics, below:

Double Asteroid Redirection Test (DART) was a NASA space mission aimed at testing a method of planetary defense against near-Earth objects (NEOs).[3] Launched from Earth in November 2021, the mission crashed into the minor-planet moon Dimorphos of the double asteroid Didymos to assess the future potential of a spacecraft impact to deflect an asteroid on a collision course with Earth through a transference of momentum. The asteroid selected for the test poses no actual threat to Earth.

DART is a joint project between NASA and the Johns Hopkins Applied Physics Laboratory (APL). The project is funded through NASA’s Planetary Defense Coordination Office, managed by NASA’s Planetary Missions Program Office at the Marshall Space Flight Center, and several NASA laboratories and offices are providing technical support. International partners, such as the European Space Agency (ESA), Italian Space Agency (ASI), and Japan Aerospace Exploration Agency (JAXA), are contributing to related or subsequent projects. In August 2018, NASA approved the project to start the final design and assembly phase. The DART spacecraft was launched on 24 November 2021, and successfully collided with Dimorphos on 26 September 2022 at 23:16 UTC.[4][5][6][7]

An unmanned spacecraft named DART has traveled millions of miles through space to intercept and intentionally slam into an asteroid. The goal is to test this method as a way to prevent a future potential cataclysmic collision with Earth. NBC’s Tom Costello reports for TODAY, in the video published on Sep 26, 2022, by TODAY, as “NASA Set To Intentionally Crash Spacecraft Into Asteroid  To ‘Nudge’ It“, below:

NASA’s DART spacecraft smashed into a tiny asteroid on Monday in the first real-world test of humanity’s ability to nudge a threatening body off course before it could crash into Earth, in the video published on Sep 26, 2022, by CBS News, as “Watch Live: NASA’s DART spacecraft crashes into asteroid in planetary defense“, below:

A NASA spacecraft has successfully slammed into an asteroid called Dimorphos. The Double Asteroid Redirection Test mission, also known as DART, spacecraft has been traveling to reach its asteroid target since launching in November 2021. On Monday, it hit its target, going about 13,421 miles per hour. CNN Space and Defense correspondent Kristin Fisher and Col. Cedric Leighton (Ret.) join CNN’s Erin Burnett to discuss. #CNN #News in the video published on Sep 26, 2022, by CNN, as “See the moment NASA’s DART spacecraft collides with asteroid“, below:

In the video published on Sep 26, 2022, by PBS NewsHour, as “WATCH LIVE: NASA’s DART spacecraft crashes into an asteroid to test defense system“, below:

When NASA’s DART spacecraft crashes into the asteroid Dimorphos, it will mark the first time humanity has deflected an object in space. It’s a test to see how we’d defend Earth against asteroid impacts, in the video published on Sep 26, 2022, by DW News, as “Watch live: NASA’s DART first-ever test of planetary defense with Asteroid Dimorphos | DW News“, below:

The space agency attempted the first test of its kind two weeks ago to see if in the future a killer rock could be nudged out of Earth’s way, in the video published by KTVB, as “Smashing success: NASA asteroid strike results in big nudge“, below:

A smashing success: that’s how NASA is describing the effort to knock an asteroid off track. The world watched as the Dart spacecraft hit the rock millions of miles away. This was just an experiment, but it could protect the world in the future. ABC’s Morgan Norwood has the update from NASA, in the video published by 13News Now, as “NASA: Probe crash nudged asteroid“, below:

NASA intentionally slammed a spacecraft into an asteroid to try to change its orbit. Now, NASA is reporting the mission was even more successful than scientists expected. NBC News’ Tom Costello reports, in the video published by CNBC Television, as “NASA reports DART mission successfully made history by changing motion of asteroid“, below: