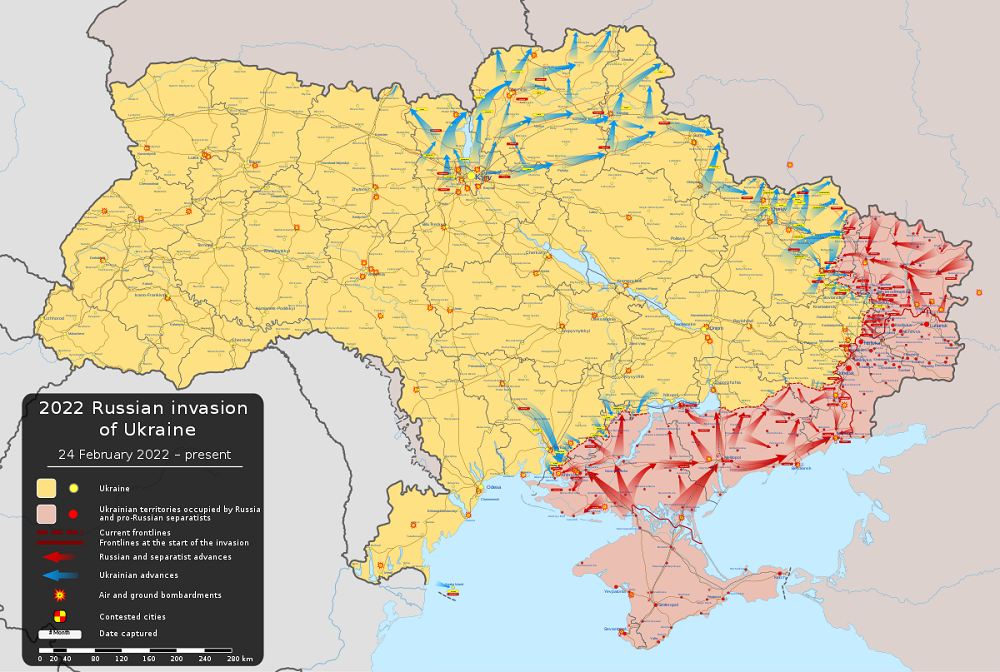 Putin’s partial mobilization of the Russian people is causing chaotic social explosion within Russia. As Fareed Zakaria indicated, in italics, below:

“Russia is now ruled by one man. There are no institutions, no politburo, no central committee, no monarchy, NOTHING! The largest country in the world, with the most nuclear weapons, is ruled by one man. It is as he once described it:  a vertical of power. And that vertical looks more unstable than ever. All of this suggests that we have entered one of the most dangerous periods in international affairs in our life time.”

At a United Nations Security Council meeting Thursday, September 22, 2022, US Secretary of State Antony Blinken said “the very international order we’ve gathered here to uphold is being shredded before our eyes” by Russia’s war on Ukraine, in the video published on Sep 22, 2022, by CNN, as “Blinken says Russia ‘shredded’ international order“, below:

President Joe Biden rebuked Vladimir Putin before the UN General Assembly this week about Russian President Vladimir Putin announcing a partial mobilization of Russian citizens and making an ominous nuclear threat after losses in Ukraine, in the video published on Sep 21, 2022, by CNN, as “Biden responds to Putin threats during UN speech“, below:

A look inside Russia, where men are being conscripted as part of Putin’s “partial mobilization” to fight in the war in Ukraine, shows fear, grief and anger, in the video published on Sep 23, 2022, by CNN, as “Inside RUssia, anguish as men are enlisted to fight in Putin’s war“, below:

Thousands are fleeing in fear of Putin escalating the war in Ukraine. He’s set to carry out another strategic move today. ABC News’ Em Nguyen has the details, in the video published on Sep 23, 2022, by ABC News, as “The race to get out of Russia“, below:

Vladimir Putin’s escalation of the war is running into increasing opposition within Russia. Police have arrested more than 1,000 people demonstrating against the call-up of reservists at nationwide protests. And Flights to foreign destinations are also selling out, as many fear it could be their last chance to leave, in the video published on Sep 22, 2022, by DW News, as “Many flee to avoid getting drafted, but where can they go? | DW News“, below:

Vladimir Putin has ordered Russia’s first military mobilization since World War Two. He also warned he would use “all means [he has]” to defend Russian territory, raising concerns around the world and saying it wasn’t a bluff. With the United Nations General Assembly taking place this week, Nato leaders attacked Putin’s announcement. But Nato-Russia relations weren’t always quite so frosty. In this episode we speak to Lord Robertson, the tenth Secretary General of that alliance, who met Putin 9 times and says that Putin even discussed joining Nato at one point in their conversations. We ask him whether Putin has changed or whether he and the West completely miscalculated what the Russian leader was up to, in the video published on Sep 23, 2022, by Channel 4 News, as “Did Nato get Putin and Ukraine wrong? Former head of Nato explains“, below:

Russia is further escalating its war in Ukraine: Moscow is mobilizing 300.000 additional soldiers and talks about using, quote, “all military means”, including the use of nuclear weapons. . Also, Moscow is orchestrating four so-called referendums to annex four Ukrainian provinces. Western governments unanimously condemn those sham referendums – but will countries like Germany now finally send those heavy weapons that Kyiv needs to repel the Russian aggression? That’s our topic today on To The Point: War in Ukraine: Is there still time to de-escalate? In the video published on Sep 22, 2022, by DW News, as “War in Ukraine: Is there still time to de-escalate? | To The Point“, below:

Ukraine’s largest neighbor on its western border is Poland, a NATO and European Union member that has its own long and violent history with Russia. Judy Woodruff sat down in New York with Poland’s president, Andrzej Duda, as Vladimir Putin looks to accelerate the war and makes overt threats of nuclear weaponry, in the video published on Sep 21, 2022, by PBS NewsHour, as “Poland President Andrezej Duda on Russia’s war in Ukraine, Putin’s nuclear threats“, below:

Ret. General Wesley Clark discusses Putin’s conscription of Russian civilians into the military to fight Ukraine, in the video published on Sep 24, 2022, by CNN, as “Retired general says it’s time to exploit weakness in Russian forces“, below: