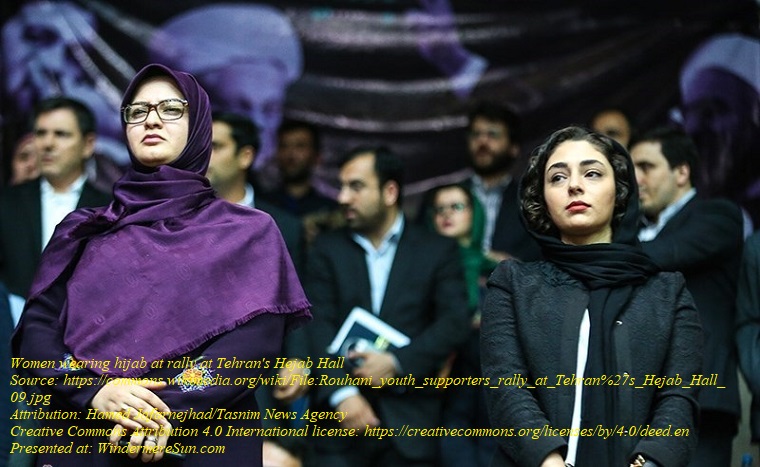 There has been huge protests over the death of a twenty-two year old Kurdish woman, Mahsa Amini, who died after  being taken in by the morality police. She died in their custody while being accused of not having correctly worn the Hijab, headcovering used by some Muslim women to observe Islamic rules of modesty. Protests had lasted a week so far and seventeen protesters have died. The Iranian government is cutting internet feed in attempt to curb spread of protests, now reaching over 80 cities. Hundreds of Kurds have been injured. Internet feed to all cities in the Kurdish region had been cut off since Wednesday, September 21, 2022, morning. Instagram and WhatsApp are now filtered in Iran, with restricted access. Protests are also seen around the world, in Lebanon, Germany, Canada, and New York of USA, where the Iranian President is attending the UN General Assembly. Acting UN human rights chief is calling for investigation into the death of Mahsa Amini.

Thousands of demonstrators on Wednesday marched through the streets of Iran amid unrest over the death of Mahsa Amini. The 22-year-old woman died in police custody after she was arrested for allegedly wearing a headscarf in an “improper” way under the Islamic Republic’s strict dress code for women. Officials said on Wednesday that two people, including a police officer, died overnight as security forces tried to disperse protesters. The figure brings the death toll to six. Meanwhile in Istanbul, a woman cut her hair during a protest outside the Iranian consulate in solidarity with Amini. Dozens of Iranian and Turkish women outside the consulate carried portraits of Amini and banners in support of women’s rights. Internet disruptions Access to Instagram in Iran was disrupted on Wednesday, according to the London-based monitoring group NetBlocks. The platform has already been one of the few Western social media sites available in Iran as Tehran blocks Facebook, Telegram, Twitter and YouTube. Separately, Iranian government websites came under what appeared to be a cyberattack. Hackers have claimed responsibility for the apparent attack. In recent years, dissident hackers have targeted the Iranian government with cyberattacks. Tehran has blamed many of those attacks on Israel. Raisi condemns West’s ‘double standards’ Addressing the UN General Assembly on Wednesday, Iran’s President Ebrahim Raisi accused the West of “double standards” after several Western countries raised concerns over women’s rights in Iran. The hardline cleric pointed to the deaths of Indigenous women in Canada, the so-called “Islamic State” (IS) group’s “savagery” against women from religious minority groups and actions by Israeli security forces in Palestinian territories. “So long as we have this double standard, where attention is solely focused on one side and not all equally, we will not have true justice and fairness,” Raisi said, in the video published on Sep 22, 2022, by DW News, as “Iran protests: Is there hope for change? | DW News“, below:

For more details about the death of Mahsa Amini, please refer to excerpt from wikipedia, in italics, below:

Amini was arrested by the Guidance Patrol, a vice squad of the Law Enforcement Command of Islamic Republic of Iran overseeing public implementation of hijab regulations, for non-compliance of her hijab with government standards. Police said she suddenly went into heart failure at a station, fell on the floor, and died after two days in a coma.[7][8] Eyewitnesses said she was beaten and her head hit the side of a police car, which in addition to her leaked medical scans,[1] led others to diagnose cerebral hemorrhage and stroke.[9]

Amini’s death resulted in a series of large scale protests across the country and garnered international attention including a statement from the United Nations High Commissioner for Refugees, putting a focus on violence against women under the Islamic Republic of Iran.[10][11][12][13] Several leaders, international organizations, and celebrities commented on the incident, condemning Iran’s Morality Police for its treatment of women, and expressing solidarity with the protestors.[14] The United States Department of the Treasury furthermore imposed sanctions on the Morality Police and Iranian leaders in various security organizations.[15]

In response to the protests, the government of Iran not only suppressed the protests, shooting protestors with birdshot and metal pellets, deploying tear gas and water cannons,[16] but also blocked access to many apps including Instagram and WhatsApp, and limited internet accessibility to reduce the protesters’ ability to organize. These may be the most severe Internet restrictions in Iran since 2019, when the Internet was shut down completely.[17]

The Iranian President canceled an interview with CNN’s Christiane Amanpour after she declined his team’s attempt at requiring her to wear a head scarf. Amanpour breaks down what happened, in the video published on Sep 22, 2022, by CNN, as “Iran’s President cancels interview after Amanpour refuses head scarf demand“, below:

The U.S. is sanctioning Iran’s “morality police,” along with some of the country’s top senior security officials, following the death of a 22-year-old woman in custody. Jiyar Gol, a world affairs correspondent at the BBC, discusses the deadly protests now taking place in Iran on CBS News, in the video published on Sep 22, 2022, by CBS News, as “Deadly protests erupt in cities across Iran after young woman dies in police custody“, below:

Protests in Iran continue after the death of a 22-year-old Kurdish woman in custody of the so-called morality police. Mahsa Amini died last week after being detained for allegedly leaving some of her hair visible in violation of an Iranian law requiring women to cover their heads. Witnesses said Amini was severely beaten by police, but authorities claim she died of natural causes. Thousands of people, often led by young women, have taken to the streets in outrage over Amini’s death, chanting slogans against the morality police and the government, with some burning their headscarves in a show of defiance. “This anger against the morality police and the violence they are committing on the streets has been building up for years,” says Iranian American journalist Negar Mortazavi, in the video published on Sep 22, 2022, by Democracy Now!, as “Women Burn Hijabs in Iran as Protests Escalate over Killing of Mahsa Amini by “Morality Police”“, below:

There’s been no let-up in Iran’s biggest protests since 2019, which have seen unprecedented footage of public burnings of the hijab. Despite disruptions to the internet, popular unrest has flared for a sixth day across the country over the death in custody of Mahsa Amini. The 22-year old Kurdish woman had been detained by the morality police for improperly wearing her hijab. We ask our panel: how far will this women’s rights movement go? In the video published on Sep 22, 2022, by FRANCE 24 English, as “Iran protests: Fury at morality police sparks women’s rights movement. FRANCE 24 English“, below:

Battles between Iranian police and anti-government protesters in Iran are now in their seventh day, in the worst unrest the country has seen for years, in the video published on Sep 22, 2022, by BBC News, as “More protesters killed in clashes with Iran police as unrest spirals after woman’s death – BBC News“, below:

Outrage is growing in Iran following the death of a 22-year-old woman in police custody. NBC News’ Ali Arouzi reports on how her death ignited mass protests around the world after she was arrested for what authorities say was a violation of the country’s strict dress code, in the video published on Sep 21, 2022, by NBC News, as “Iran Protests Intensify As Women Burn Headscarves In Defiance Of Police“, below:

Historic protests are continuing across Iran following the death of a 22-year-old woman who was in custody of the country’s “morality police.” NBC News’ Ali Arouzi reports from Tehran, in the video published on Sep 23, 2022, by MSNBC, as “Iranian Women Burn Headscarves, Cut Hair After Women Dies In Police Custody“, below: