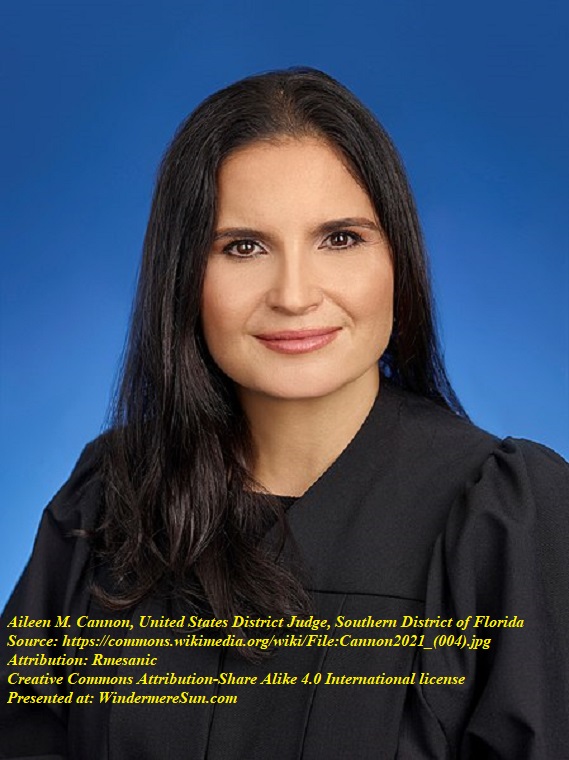 Trump-picked Federal Judge Aileen M. Cannon rejects the premise that documents seized from Donald Trump’s Florida home are classified. She also  believes that Donald Trump deserves special treatment in federal court because he is a former President. She appointed Judge Raymond J. Dearie to be the Special Master to determine what is classified (vs not classified) because he is acceptable to both sides of the case. However, even Trump’s attorneys did not argue that these documents were not classified. Judge Raymond J. Dearie is given until end of November, 2022, to complete his work that is unprecedented in the American history, in the video published on Sep 16, 2022, “Watch The Last Word With Lawrence O’Donnell Highlights: Sept. 15“, below:

Former President Donald Trump is fighting legal battles on nearly every front. Congressman Ted Lieu (D-CA) joined MSNBC’s Ayman Mohyeldin to discuss the latest developments in the Department of Justice’s investigation into Trump’s handling of classified documents and its probe into 2020 election inference, in the video published on Sep 18, 2022, “Rep. Ted Lieu: “In America, The Law Is Applied Equally. No One Is Above The Law.” below:

Trump-appointed Judge Aileen Cannon gave Donald Trump everything he is asking for in court by rejecting Justice Department’s request on classified documents found in Donald Trump’s Florida home. MSNBC’s Lawrence O’Donnell explains why the judge offered absolutely no evidentiary basis for why she does not believe the documents are classified, in the video published on Sep 15, 2022, “Lawrence: Trump Has Poisoned The Federal Judiciary“, below:

Legal experts Neal Katyal, Andrew Weissmann and Bradley Moss join MSNBC’s Lawrence O’Donnell to discuss why a Trump-appointed judge’s ruling that classified docs seized from Donald Trump’s Florida home are not classified is “the end of the rule of law.” in the video published on Sep 15, 2022, “‘Outrageous And Stupid’: Legal Experts Excoriate Trump Judge’s New Ruling“, below:

The FBI found classified documents at former President Donald Trump’s residence at Mar-a-Lago last month. Liz Landers speaks with a former CIA officer to learn about the potential impact this security breach may have on the intelligence community, in the video published on Sep 8, 2022, “Former Spy Assesses Trump’s Mar-a-Lago Documents“, below:

In a tweet (shared by Sean Hannity to Mark Meadows) from Ed O’Keefe presented during January 6 Senate Judiciary Committee hearing in the video above, it is presented that, in italics, below:

“JUST IN: “This is not news we deliver lightly,” @margbrennan says as she reports: Trump Cabinet secretaries are discussing invoking the 25th Amendment to remove President Trump. Nothing formal yet presented to VP Pence.  “I’m talking about actual members or the Cabinet,” she says.  8:34 PM  January 6, 2021

The Justice Department has issued about 40 subpoenas in the last week and seized two telephones related to the actions of former President Donald Trump, his allies and efforts to overturn the 2020 election, according to sources familiar with the matter, according to NBC News, in the video above. DOJ (Department of Justice) has now informed the court of  approval of a candidate selected by Trump’s legal team to be the special master. In the article by Kyle Cheney and Josh Gerstein of Politico, in italics, below:

“The main sticking point in the special master plans laid out by both sides seems to be the set of roughly 100 documents with classification markings…prosecutors are asking that the potentially classified records be excluded from the review process the special master would undertake.”

Former federal prosecutor and law professor of  University of Alabama, Joyce Vance, said, “There is no good news for Trump here.”

Former President Trump is warning of big problems in the U.S. if he is indicted over his mishandling of classified documents, telling conservative radio host Hugh Hewitt ‘I don’t think the people of the United States would stand for it.’ The Morning Joe panel discusses why Trump is not bigger than the law, in the video published on Sep 16, 2022, “In Warning Over Indictment, Trump Seems To See Himself As Bigger Than The Law“, below:

While declaring himself innocent in the Mar-a-Lago documents case, the former president insisted any indictment would “not keep him from running for president.” ABC News’ Andrea Fujii reports, in the video published on Sep 16, 2022, “Trump warns of ‘problems’ if indicted“, below:

In the video published on Sep 15, 2022, “BREAKING: Trump issues unhinged THREAT on air“, below:

As Brian Tyler Cohen stated in the video above, “If no one is above the law in this country, then now comes the time to prove it.”