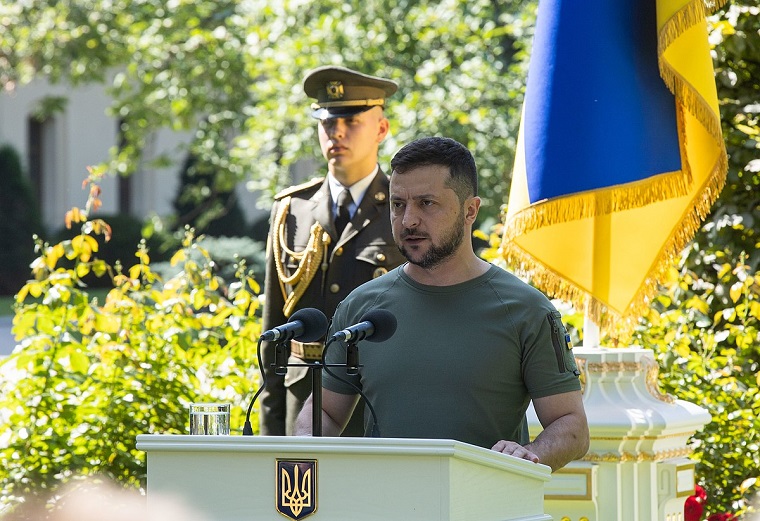 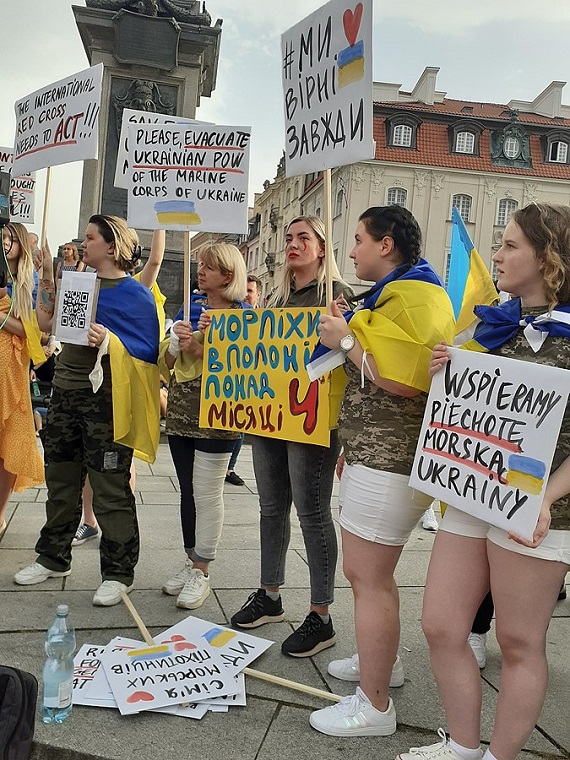 In a country tinged with sadness and grief, Ukraine celebrates her Independence Day, on August 24, 2022. In an address to the country, President Zelenskyy warned the holiday could bring “hideous provocations and brutal strikes.” in the video published on Aug 24, 2022, “Ukraine marks Independence Day under war |GMA“, below:

A Russian attack on a train station in Ukraine killed more than a dozen people and left 50 others wounded. The attack coincided with Ukraine’s Independence Day and came exactly six months after the start of the war. Amna Nawaz takes a look back at the brutal fight already waged and speaks with Keir Giles of Chatham House about what’s next in the conflict, in the video published on Aug 24, 2022, “Ukraine marks Independence Day as Russia strikes civilian targets“, below:

Britain’s outgoing prime minister Boris Johnson met Ukrainian President Volodymyr Zelenskyy for what is likely to be his final visit to Kyiv as prime minister, in the video published on Aug 25, 2022, “Britain’s Johnson Visits Ukraine President Zelenskyy in Kyiv“, below:

To learn more about Independence Day of Ukraine, please refer to the excerpt from wikipedia, in italics, below:

Independence Day of Ukraine (Ukrainian: День незалежності України) is the main state holiday in modern Ukraine,[nb 1] celebrated on 24 August[3] in commemoration of the Declaration of Independence of 1991.[4]

The current form of the holiday was first celebrated on 16 July 1991, as the first anniversary of the Declaration of State Sovereignty of Ukraine passed by the Verkhovna Rada (Ukraine’s parliament) in 1990.[4][6] Since the Declaration of Independence was issued on 24 August 1991, and confirmed by the referendum of 1 December 1991, the date of the holiday was changed.[7]

Ukraine’s Culture Ministry confirmed there would not be any public celebration to mark the holiday.[38] Officials warned civilians against gathering in major cities, with President Zelenskyy stating “Russia may try to do something particularly nasty, something particularly cruel.”[39] Russia would attack on the day of anniversary, shelling a civilian train in Chaplyne, Dnipropetrovsk Oblast, killing 25. The Russian defense ministry claimed it had targeted a military train using a single Iskander missile, and that the attack had successfully killed 200 Ukrainian soldiers.[40]

In Kyiv, the Kyiv Independence Day Parade was cancelled for its tenth time as resources were directed to the war effort. Kyiv City Hall stated online “This year Ukraine celebrates the anniversary of independence in terms of martial law and under the threat of possible shelling. Mass events are prohibited, because the enemy is unpredictable, so we have to be prepared for any scenario.”[41] In place of a parade, numerous Russian military vehicles and artilleries destroyed by Ukrainian troops were displayed along Khreshchatyk, where Zelenskyy issued a speech commemorating the anniversary and advocating for Ukrainian victory. Several civilians further defaced the remains with graffiti condemning Russia (namely Vladimir Putin) and calling for justice for devastated cities such as the Russian-occupied Mariupol.[39][42] A drone carrying a large Flag of Ukraine was also flown around the Motherland Monument.[43]

Ukrainians and their supporters around the world celebrated the 31st Anniversary of the country’s independence from Soviet rule – with Wednesday also marking 6 months since Russia invaded its western neighbor. Allies Britain and the U.S. also weighed in, offering more money for military aid, in the video published on Aug 24, 2022, “Ukrainians outside Ukraine celebrate 31st Independence day from Soviet rule“, below:

Belarus, President Alexander Lukashenko (an ardent supporter of Russia) acknowledged Ukraine’s independence, stating “[he] wishes Ukrainians peaceful skies, tolerance, courage, strength and success in restoring a decent life.” President Zelenskyy’s top advisor Mykhailo Podolyak rejected the congratulatory message, calling it cynical and disingenuous given Belarus’ heavy involvement in the attacks of Ukraine, and that “this blood-soaked clowning is recorded and will have consequences.”[44][45]

Belgium, supporters and refugees of Ukraine gathered in the capital of Brussels, host to around 30% of the country’s estimated 78,000 Ukrainian refugees. At the Grand Place, the Manneken Pis was dressed in “traditional Kozak costume” and a large Flag of Ukraine was unfurled. European Commission President Ursula von der Leyen attended wearing Ukrainian colors.[43][46][47][48]

Czech Republic, hundreds of people gathered in Prague at the Wenceslas Square (New Town), and Old Town Square (Old Town). In addition to support of Ukraine and its Azov Regiment, the demonstration saw extensive anti-Russian sentiment, with signings being made for a petition calling on the parliament of the Czech Republic to declare Russia a terrorist state. Similar demonstrations were also held in Brno‘s Moravian and Jakubske Squares.[49][50]

Greece, a parade was held in Athens.[51][52] The Hellenic Ministry of Foreign Affairs issued a statement to reaffirm Greece’s solidarity with Ukraine, whose sovereignty and independence is recognized.[53]

Germany, a parade was held in Berlin, where a candlelight vigil was set up in front of the Brandenburg Gate.[43][52] Chancellor Olaf Scholz assured support, stating that Germany “stands firmly by the side of the threatened Ukraine today and for as long as Ukraine needs our support,” and rebuked the Kremlin for its “backward imperialism.”[46][54]

Thousands of people, many of them Ukrainians, marched through Berlin, in what organizers called a ‘Freedom Parade’ commemorating 31 years of Ukrainian independence and condemning the Russian military invasion, in the video published on Aug 24, 2022, “Thousands march through Berlin for Ukrainian Independence Day“, below:

Ireland, a protest of 3,000 people against Putin and Russian violence was held in Dublin, marching 5km from the General Post Office to the Ukrainian embassy. Ukrainian ambassador to Ireland Gerasko Larysa [uk] was in attendance.[52][55] Other events were held across the country.[56]

Italy, Rome‘s Ukrainian community participated in a “march for freedom” through the city center that passed the Colosseum.[43][51] Prime Minister Mario Draghi gave congratulations and continued offers of support to Ukraine.[57]

Malta, demonstrations were held in Valletta and Floriana. Prime Minister Robert Abela tweeted that “[Malta’s] will to stay united and restore peace in Ukraine remains strong.”[52][58]

Independence Day of Ukraine in Warsaw – 2022.

Poland, thousands of Polish citizens and Ukrainian refugees gathered in the city centers of Warsaw and Kraków in celebration and support.[43][51][52] The Palace of Culture and Science was illuminated in Ukrainian blue and yellow. Warsaw’s mayor Rafał Trzaskowski assured that “Poland is with [Ukraine], Warsaw is with [Ukraine]!” President Andrzej Duda also gave his support to Ukraine, recalling Poland as the first country in the world to have recognized Ukraine’s independence.[59]

United Kingdom, Independence Day saw a significant celebration from the estimated 100,000 Ukrainian refugees in the kingdom, and parades in support of Ukraine and protests condemning Russia were both held. In

England, a dedicated service was held at the York Minster in York.[63] In London, a demonstration against the Russian invasion was held outside Downing Street.[51][52][64] Chief Mouser to the Cabinet Office Larry was pictured in front of 10 Downing Street decorated with blue and yellow flowers (including sunflowers, one of Ukraine’s floral emblems).[43][65] In

Scotland, hundreds in Edinburgh took part in a march on Calton Hill from the Volodomyr Velacky monument to the Holodomor plaque. Ukrainian Ambassador to the United Kingdom, Vadym Prystaiko, and his wife, Inna Prystaiko, were among the participants.[66] According to the British Embassy Kyiv, Queen Elizabeth II congratulated Ukrainians, stating “I hope that today will be a time for the Ukrainian people, both in Ukraine and around the world, to celebrate their culture, history, and identity.”[67] Prime Minister Boris Johnson also expressed that “[Ukraine] will win” and has the United Kingdom’s support.[68] The Ministry of Defence tweeted a video of the Band of the Scots Guards performing “Stefania“.[46]

United States, a massive Flag of Ukraine (reportedly the world’s largest) was unfurled in New York City, held by hundreds of supporters in Central Park‘s Sheep Meadow.[69] President Joe Biden called the 31st anniversary’s coincidence with the half-year mark of the war “bittersweet”, and pledged approximately $2.98 billion USD in military aid to Ukraine’s forces.[46][70][71] Congratulations were issued by other U.S. politicians including Secretary of State Antony Blinken,[72] NYC Mayor Eric Adams,[73] and Massachusetts Representative Paul Tucker.[74] Preceding Independence Day, the U.S. Embassy in Ukraine issued warnings from the United States Department of State that Russia would most likely increase attacks on civilians and infrastructure.[75]