What Happened To Austin Tice? 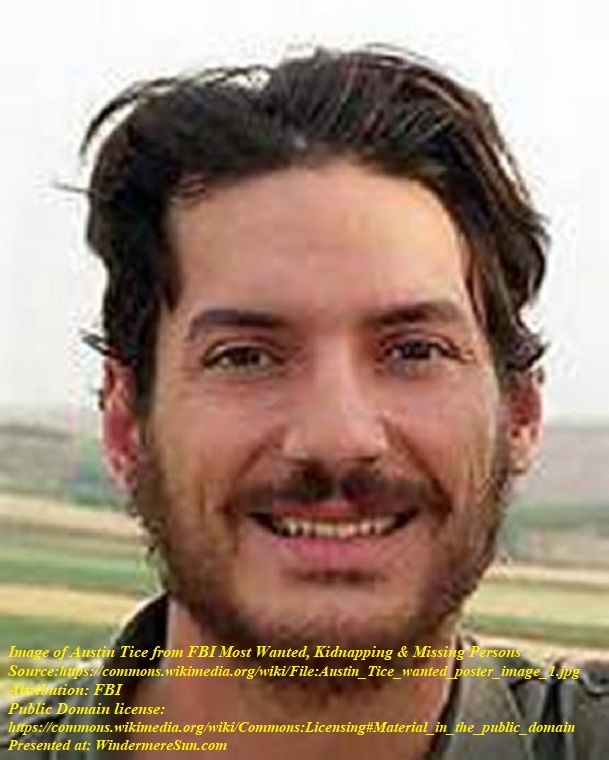 10 years have passed without answers or information about Austin Tice. August 14, 2022 marks the anniversary of his disappearance in Syria, in the video published on Aug 11, 2022, “Austin Tice: Missing For 10 Years In Syria“, below:

The mother of freelance journalist Austin Tice, who was kidnapped in Syria in 2012, joins “Red and Blue” to discuss her meeting with President Biden, as well as the latest attempts to find and free him, in the video published on May 4, 2022, “Mother of kidnapped American Austin Tice describes meeting with Biden“, below:

American journalist Austin Tice was abducted six years ago while he was covering the war in Syria. His parents, Mark and Debra Tice, who believe he is alive and have been trying to bring him home ever since, sit down with TODAY’s Savannah Guthrie to talk about staying hopeful. “In many ways the time has gone so quickly,” Debra said. “But we know that for Austin, it must be grinding on.” in the video published on Aug 14, 2018, “Journalist Austin Tice’s Parents Open Up 6 Years After His Capture: ‘It’s Hard To Believe’| TODAY“, below:
Award winning freelance journalist Austin Tice, who is believed to have been captured in Syria, has been missing for two years. In the face of uncertainty, his parents, Marc and Debra, continue to search for their lost son. (by Jared L. Christopher), in the video published on Aug 12, 2014, “Vanished: The Story of U.S. Journalist Austin Tice who went missing in Syria in 2012“, below:

Austin Bennett Tice (born August 11, 1981) is an American freelance journalist and a veteran U.S. Marine Corps officer who was kidnapped while reporting in Syria on August 14, 2012.[5]

Tice is from Houston, Texas, the eldest of seven siblings.[6] He is an Eagle Scout[7] and grew up dreaming of becoming an international correspondent for NPR.[5][8] At the age of 16, Tice attended the University of Houston for one year, then transferred to and graduated from the Edmund A. Walsh School of Foreign Service at Georgetown University in 2002.[9] He completed two years of study at Georgetown University Law Center before going to Syria as a freelance journalist during the summer break before his third and final year of law studies.[5]

Tice was previously a U.S. Marine Corps infantry officer, serving tours of duty in Iraq and Afghanistan.[10] He left active duty as a Captain but remained in the Marine Corps Reserves. Tice’s father said, “He was hearing reports from Syria saying this is happening and that is happening but it can’t be confirmed because there really are no reporters on the ground. And he said, ‘You know, this is a story that the world needs to know about.'”[11] He was one of only a few foreign journalists to report from inside Syria during the intensification of the civil war.[10] He entered the country in May 2012 and traveled through central Syria, filing battlefield dispatches before arriving in Damascus in late July 2012.[12] Tice’s reporting garnered his Twitter account 2,000 followers. He stopped tweeting after August 11, 2012.[10]

Tice was one of the first American correspondents to witness Syrian-rebel confrontations.[13] His coverage was cited, along with efforts of additional reporters, as contributing to McClatchy winning a George Polk Award for war reporting for its coverage of Syria’s civil war.[13]

Tice was working as a freelance journalist for McClatchy, The Washington Post, CBS and other media when he was abducted from Darayya, Syria.[4][5] There was no immediate contact from Tice or his captors,[5] but in September 2012 a 47-second video of Tice blindfolded and bound was released.[14][15] In October 2012, a US spokesperson said it was believed, based on the limited information it had, that Tice was in the custody of the Syrian government.[16] No government or group in Syria has said it is holding Tice.[17]

In February 2015, Reporters Without Borders (RSF) launched its pro bono #freeaustintice campaign. Since September 2012, RSF has been assisting and advising his family. His parents asked RSF to help them raise awareness about their son’s situation. RSF partnered with the global advertising agency J. Walter Thompson to prepare a public awareness campaign in order to do everything possible to bring Tice safely home. The campaign has since garnered over 17,000 signatories and a widespread blindfold pledge on social media.[18]

In April 2018, the FBI increased their reward for information regarding Tice’s whereabouts to $1 million[19] and two US officials said Tice is believed to have survived captivity.[20]

In August 2018, a US State Department official said the US government still believes Tice is being held by the Syrian government or its allies.[21] Concerning an August meeting between US and Syrian security officials in Damascus, two senior US intelligence sources told Reuters the “ongoing dialogue” with the Syrian government included the fate of Tice.[22]

In November 2018, Reuters reported that Robert O’Brien, the US Special Presidential Envoy for Hostage Affairs, had called on Russia to “exert whatever influence they have in Syria” to secure Tice’s release. The Syrian government said that it was unaware of Tice’s whereabouts.[23]

In December 2018, Tice’s parents announced during a press conference that they had received new information that indicated their son was still alive without elaborating further. Speaking to reporters from Beirut, Tice’s parents said they believed that the best chance of Tice’s release would come from direct talks between the US and Syrian governments.[24]

After Tice’s disappearance was mentioned by WHCA president Steven Portnoy at the 2022 White House Correspondents Dinner, President Joe Biden invited Tice’s parents to the White House for a meeting.[25] Following the 45 minute meeting, his parents said they are hopeful for his return.[25] As part of a statement issued to mark the tenth anniversary of Tice’s captivity, Biden noted that the US government knew “with certainty” that the journalist was being held by the Syrian government.[26]