Serious Damage To Russian Air Base In Crimea 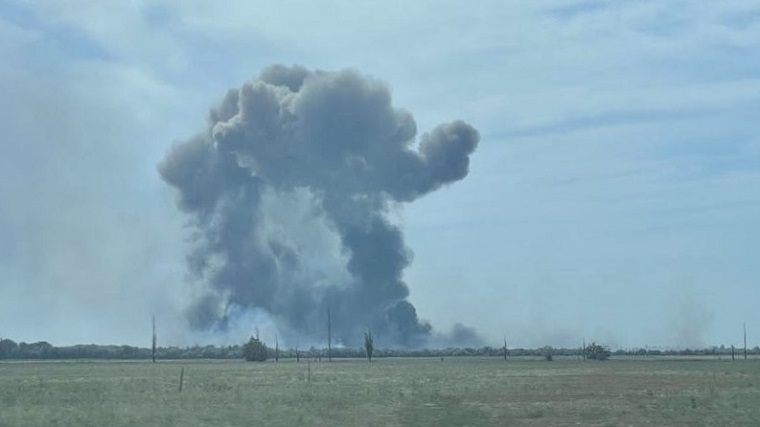 As the Ukraine war approaches the six-month mark, the country targets a Russian air base in Crimea. Ukraine’s military says nine Russian planes were destroyed in the attack but Russia denies the damage. Gen. Barry McCaffery joins, in the video published on Aug 11, 2022, “Ukraine Strikes In Russian-Occupied Crimea“, below:

More details about 2022 Novofedorivka explosions, from excerpt in wikipedia, in italics, below:

A series of large explosions occurred at the Saky Airport in the city of Novofedorivka, Crimea, on August 9, 2022, during the Russian invasion of Ukraine.[1][2] The airport had been seized by Russian forces during the 2014 annexation of Crimea, part of the Russo-Ukrainian War.

Russian authorities declared a state of emergency and yellow-alert level of terrorist threat, but explained the explosions as the result of an accident, and said one person was killed, over a dozen injured, and 252 residents moved to temporary shelter due to damage to apartment blocks.[3][4] Ukrainian authorities did not take responsibility for an attack, but stated that nine Russian planes had been destroyed in the preceding day, and unverified social media footage showed at least one destroyed jet fighter at an airport.[4] A senior Ukrainian military official anonymously stated that special forces and partisans were responsible.[3] Satellite images revealed significant damage with at least eight aircraft, including Su-24 and Su-30 destroyed on the tarmac.[5][6]

On 12 August 2022, Anton Herashchenko, an advisor to Ukraine’s Minister of Internal Affairs Denys Monastyrsky, claimed that 60 pilots and technicians had been killed and 100 people wounded in the explosions.[7]

On August 10, the occupying authorities in Crimea announced that the number of people injured had increased to 13, and one person had died.[8]

The Armed Forces of Ukraine stated that 9 Russian aircraft were destroyed as a result of the attack on the air base.[9]

On August 10, satellite images of the consequences of the explosions were published, with which Oryx group researchers confirmed the destruction/damage of 10 Russian aircraft at the air base:[10][11]

According to a Ukrainian military site:[12]

Ukrainian President Volodymyr Zelenskyy is vowing to take back Crimea following series of deadly explosions in territory now held by Russia. CBS News’ Elaine Quijano and Tanya Rivero are joined by reporter Mary Ilyushina with the latest, in the video published on Aug 10, 2022, “Explosions rock Russian-held base in Crimea“, below:

New satellite images show that the damage at a Russian-held air base in Crimea is far worse than the Kremlin has let on. CBS News foreign correspondent Charlie D’Agata explains the significance of this attack and the state of Russia’s war in Ukraine, in the video published on Aug 11, 2022, “Satellite images show more damage to Russian air base attacked in Crimea“, below:

Former NATO Supreme Allied Commander Admiral James Stavridis and former Deputy National Security Adviser Ben Rhodes join Andrea Mitchell to analyze recent escalations in the conflict between Ukraine and Russia after Ukraine’s Air Force said nine Russian jets were destroyed in explosions at an airbase in Crimea, which Russia denies. “This is a big move. Taking out nine aircraft is important, but it’s also psychologically important. Crimea is a bastion of pro-Russian sentiment,” says Stavridis. “Very good day for the Ukrainians.” in the video published on Aug 10, 2022, “‘Big Move’ For Ukraine Taking Out 9 Russian Aircraft In Crimea, A ‘Bastion Of Pro-Russian Sentiment’“, below:

Former Lt. Col. Alexander Vindman says that the U.S. is not doing enough to help Ukraine. He joins Zerlina to discuss, in the video published on Aug 10, 2022, “Vindman: War In Ukraine Has Reached “Inflection Point” | Zerlina“, below:

“Suddenly Ukraine possesses the offensive power to hit anywhere they want in Crimea.” Major General Chip Chapman describes the Ukrainian attack on Saki air base as ‘frightening’ for the Russians, in the video published on Aug 10, 2022, “Crimea air base attack ‘frightened the life’ out of Russia“, below: