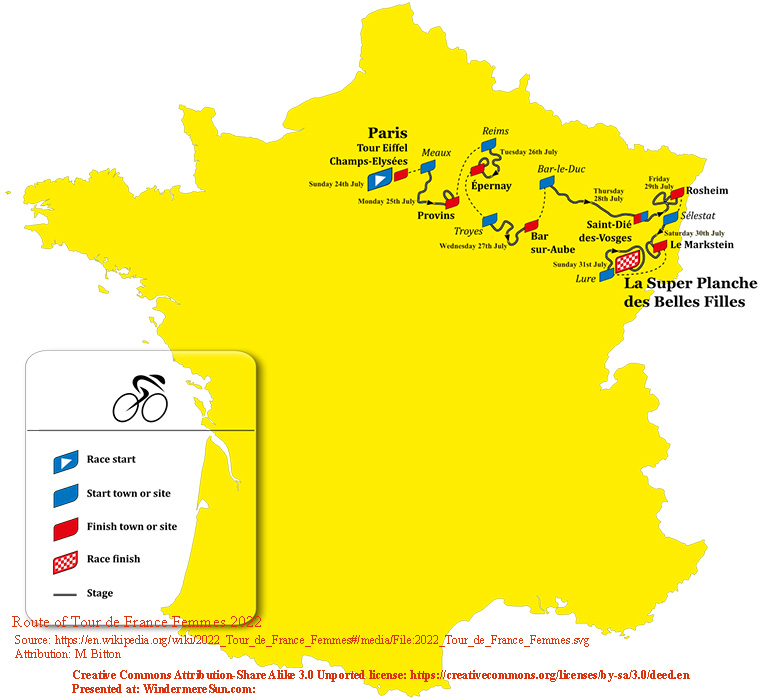 This is a race many have been waiting for decades, the 2022 Tour de France Femmes (for women), from July 24 to July 31, 2022! For more details, please refer to the excerpt from wikipedia, in italics, below:

The race followed years of campaigning by the women’s professional peloton for an equivalent race to the men’s Tour de France,[2] after historic attempts failed due to financial difficulties, limited media coverage and trademark issues.[3][4] The race was organised by the Amaury Sport Organisation (ASO), which also organizes the men’s Tour de France.

The race was won by Annemiek van Vleuten of Movistar Team. At the start of the race, van Vleuten suffered from a stomach bug, causing her to lose almost a minute to some of her rivals for the maillot jaune. She was eventually able to recover as the race reached the mountains. On stage seven, van Vleuten attacked on the first climb, before riding solo for the last 60 kilometres (37 mi) to win the stage by more than three minutes, moving into the yellow jersey in the process. She confirmed her victory by winning her second consecutive stage the next day, which finished atop La Super Planche des Belles Filles. Second place went to Demi Vollering of SD Worx, who finished second to van Vleuten on both mountain stages to consolidate her place in the general classification (GC). The podium was rounded out by Katarzyna Niewiadoma of Canyon–SRAM. She put in a consistent performance during the first six stages, gaining time on some of her rivals for the podium before finishing in the top five on both mountain stages to seal her podium place.

In the race’s other classifications, Marianne Vos of Team Jumbo–Visma won the points classification. She finished in the top five on each of the first six stages, taking two stage wins in the process. Vos also held the maillot jaune from the second stage to the sixth stage. Apart from finishing second in the GC, Vollering also took the polka-dot jersey as winner of the Queen of the Mountains (QoM) classification. Shirin van Anrooij of Trek–Segafredo took the white jersey as the winner of the young riders classification, which was awarded to the best-placed GC rider under the age of 23. Canyon–SRAM won the teams classification as the team with the lowest aggregate time among their three best-placed riders. Vos also took the super-combativity award to add to her green jersey and two stage wins.

Overall, the race was highly praised by the public, media, teams and riders – with large crowds and high TV viewership. As the first official women’s Tour de France since 1989, the race enjoyed substantial media coverage around the world. Race director Marion Rousse did note that there was room for improvement in future editions, and in women’s cycling more generally.

24 teams participated in the race.[5] All 14 UCI Women’s WorldTeams were automatically invited. They were joined by 10 UCI Women’s Continental Teams – the three best 2021 UCI Women’s Continental Teams (Ceratizit–WNT Pro Cycling, Parkhotel Valkenburg and Valcar–Travel & Service) received an automatic invitation, and the other seven teams were selected by Amaury Sport Organisation (ASO), the organisers of the Tour. The teams were announced on 30 March 2021.[6] 144 riders started the race, from 25 nationalities – with the largest percentage being Dutch (20% of the peloton).[5]

Catch all of the action from the final stage of the inaugural Tour de France Femmes, as a champion is crowned and jerseys are handed out, in the video published on July 31, 2022, “Tour de France Femmes 2022: Stage 8 | EXTENDED HIGHLIGHTS| 7/30/2022| Cycling on NBC Sports”, below: