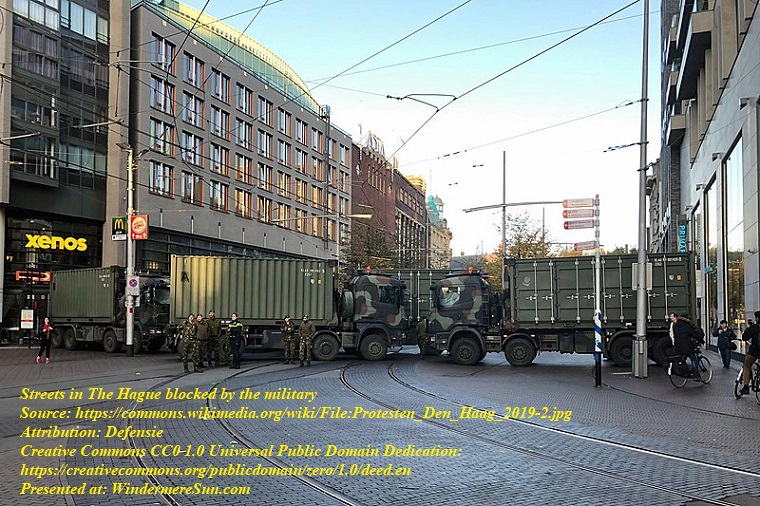 The tiny country of Netherlands, with a population of 17.7 million people living within an area roughly 41,800 km2 (or 16,100 sq mi), of which the land area is 33,500 km2 (12,900 sq mi), is the world’s second-largest exporter (next to USA) of food and agricultural products by value, owing to its fertile soil, mild climate, intensive agriculture, and inventiveness of its farmers. Therefore, when the farmers of Netherlands (aka Dutch farmers) protest, the world listen.

This just came through the AP (Associated Press): Dutch farmers protested in The Hague, against government’s  plans to reduce nitrogen emissions by dumping manure and garbage Wednesday (July 27, 2022) on highways and setting fires alongside roads — the latest actions in a summer of discontent. According to Politico: Dutch police fired shots at tractor-riding farmers who were protesting against plans to cut nitrogen emissions on Tuesday (July 26, 2022) evening on northern Netherlands. The shots hit a tractor and no one was hurt. Police said they were responding to a “threatening situation” when the farmers who were attempting to push past a blockade to get onto a highway in Friesland province, started to drive their tractors into officers and their vehicles. Three suspects were arrested. The Dutch governmental internal investigator Rijksrecherche said it  would look into the events, given that police had discharged their weapons.

Relatively large numbers of livestock, heavy use of fertilizers, traffic and construction in the densely populated Netherlands have led to high levels of nitrogen oxide in the air and water. The Dutch farmers’ protest started back in 2019 until COVID put a stop to it. But farmers’ protest restarted in June of 2022 in response to Dutch government’s plan to reduce net nitrogen oxide and ammonium emission by 50% by 2030 and with EU’s Natura 2000 areas subjecting to as much as 75% reduction by 2030 (with reduction of cattle numbers by 30%, eliminating 1 million cows and 4 million pigs), as part of the EU’s Sustainable Development Goals (aka SDGs or Agenda 2030, with 17 goals). Farm and agriculture organizations said the targets are not realistic and called for a protest in The Hague on June 22, 2022. Sjaak van der Tak of agricultural organization LTO said, “This is not going to work.” Christianne van der Wal, the Minister for Nature and Nitrogen Policy in the Fourth Rutte cabinet, said, at a news conference, that details of how the targets will be met will be worked out in the coming months with provincial governments. The targets put forth in June of 2022 were intended to comply with rulings in 2018 by the European Court of Justice and in 2019 by the Netherlands’ Council of State that Dutch policies were failing to address the problem.

Since June 22, 2022, the Dutch farmers’ protest has spread to various parts of Netherlands, and there are now also solidarity protests in Germany, Italy, Spain, and Poland. In addition to bringing the country to a stand still, the Dutch farmers have also sprayed government buildings with manure and blockaded distribution centers, leading to empty shelves in supermarkets. The reasons for such aggressive protests on the part of the Dutch farmers: 1. they believe their government is making too high of a demand 2. While the Dutch government had set up a 1 billion Euro fund to help farmers to meet the targets, reducing cattle by 30% will definitely put some farmers out of business. Therefore, they believe the government will have to nationalize some of the lands in order to meet these targets. Dutch farmers believe they have already done their share in helping with reduction of emission (since 70’s, agricultural emission had already reduced by 30% per pig and 45% per cow, use of fertilizers reduced by 50%, nitrogen emission reduced by 56%). 3. Ultimately significant changes in global emissions would require reduction from big producers of these emissions (since Netherlands is only the 60th largest agriculture producer in the world) such as China and India. No one country alone can make the decisive change in climate change. Some believe that this may be a way for Dutch government to reorder future land use. Government’s response is that they are willing to negotiate with Dutch farmers.

Thousands of Dutch farmers are rallying against the government on their tractors traffic in Central Netherlands and around Amsterdam coming to a standstill. They protested government’s plans to rein in emissions of nitrogen oxide and ammonia, in the video published on June 23, 2022, “Farmers protest against Dutch government’s plan to cut nitrogen emission|WION“, below:

In the video published on July 14, 2022, “Will the Netherlands scrap Net Zero: Farmers Protests Explained“, below:

Farmers in the Netherlands are angry They’re rejecting laws that regulate emissions produced by livestock, but will have a major impact on the farming community and the larger economy. The Netherlands has failed to meet its emissions reduction targets – so permits for new homes and roads have not been granted since 2019, to prevent further pollution. And the government has introduced tough new rules. Its $100-billion food export industry – one of the biggest in the world – could be badly affected. So, what will this climate policy mean for global food supplies? In the video published on July 4, 2022, “Why are farmers in the Netherlands angry?| Inside Story“, below:

I wonder if it would have helped to resolve conflicts between Dutch farmers and their government if the Dutch government tried to educate the Dutch farmers, before making policy changes, on various new farming technologies (such as vertical and hydroponic farming) that would dramatically reduce water use, land use, need of soil, pesticides and herbicides while increase productions dramatically. That 1 billion Euro set aside may also help these farmers by subsiding new farming equipment to ease the pain of transition.  Perhaps the cattle reduction needs to be negotiated further for a more smooth transition. Several other possibilities to consider: 1. Emission trading between farmers: for example, farmers that are able to have dramatic nitrogen and ammonia reduction may sell their extra credits to cattle farmers. 2. Have a nitrogen tax that would slowly increase over time; this would allow farmers & consumers time to adapt to change in addition to providing government the tax money to remediate what is needed to make up the difference between the expected and actual nitrogen and ammonium reductions. The innovative Dutch people have set many incredible examples in the past. The world is looking to the Dutch for more incredible targets in the future as well.

The latest info/video received is from that of Dutch farmer, in the video published on July 29, 2022, “Dutch Farmer Speaks“, below: