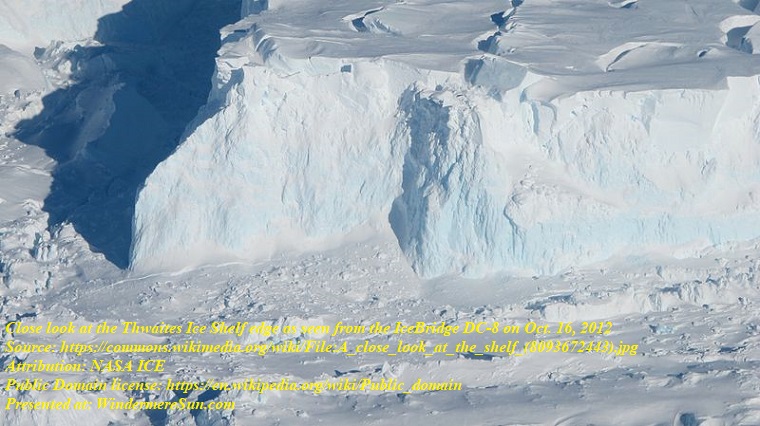 Climate change’s connections with the extreme heat and weather events in the U.S. and around the globe have been well established. But climate change is also having a measurable impact on a much slower-moving development: the loss of glaciers and the melting of the ice. Miles O’Brien brings us this update on a scientist’s quest to chronicle what’s happening with one of the most important glaciers, in the video published on July 25, 2022, “Scientists measure how quickly crucial Antarctica glacier is melting“, below:

More about Thwaites Glacier, please refer to the excerpt from wikipedia, in italics, below:

Thwaites Glacier, also known as the Doomsday Glacier,[2] is an unusually broad and vast Antarctic glacier flowing into Pine Island Bay, part of the Amundsen Sea, east of Mount Murphy, on the Walgreen Coast of Marie Byrd Land.[3] Its surface speeds exceed 2 kilometres (1.2 miles) per year near its grounding line. Its fastest flowing grounded ice is centered between 50 and 100 kilometres (31 and 62 mi) east of Mount Murphy. In 1967, the Advisory Committee on Antarctic Names named the glacier after Fredrik T. Thwaites (1883–1961), a glacial geologist, geomorphologist and professor emeritus at the University of Wisconsin–Madison.[4][5] The historian Reuben Gold Thwaites was his father.[6]

Thwaites Glacier is closely monitored for its potential to raise sea levels.[7] Along with the Pine Island Glacier, it has been described as part of the “weak underbelly” of the West Antarctic Ice Sheet, because of its apparent vulnerability to significant retreat. This hypothesis is based on both theoretical studies of the stability of marine ice sheets and observations of large changes on these two glaciers. In recent years, the flow of both of these glaciers has accelerated, their surfaces have lowered, and their grounding lines have retreated.

The Thwaites Ice Shelf, a floating ice shelf which braces and restrains the eastern portion of Thwaites Glacier, is likely to collapse within a decade from 2021, leading to increased outflow and contribution to sea-level rise.[8][9][10] For this reason, Thwaites Glacier and its ice shelf have been proposed as sites for climate engineering interventions to stabilize and preserve its ice.[11]

In 2001, a study of Thwaites Glacier using satellite radar interferometry data from the Earth Remote Sensing Satellite 1 and 2 revealed that the grounding line of Thwaites Glacier was retreating at 1 kilometer per year and that the glacier was significantly out of mass balance, hence confirming presumptions of collapse by Terence Hughes, University of Maine, in 1973. In 2002, a team of scientists from Chile and NASA on board an Orion P3 from the Chilean Navy collected the first radar sounding and laser altimetry survey of the glacier to reveal extensive thinning and acceleration in thinning. This discovery prompted an extensive airborne campaign in 2004 by the University of Texas, Austin, Texas, to be followed by subsequent airborne campaigns under NASA’s IceBridge Campaign in 2009–2018.

In 2011, using geophysical data collected from flights over Thwaites Glacier (data collected under NASA’s IceBridge campaign), a study by scientists at Columbia University’s Lamont–Doherty Earth Observatory showed a rock feature, a ridge 700 meters tall that helps anchor the glacier and helped slow the glacier’s slide into the sea. The study also confirmed the importance of seafloor topography in predicting how the glacier will behave in the near future.[12] However, the glacier has been considered to be the biggest threat on relevant time scales, for rising seas, current studies aim to better quantify retreat and possible impacts.[13] Since the 1980s, the glacier had a net loss of over 600 billion tons of ice though 2017.[14] In 2017, scientists discovered previously unknown volcanoes nearby.[15]

In 2020, scientists discovered warm water underneath the glacier for the first time.[16][17] The place where the glacier was in contact with the sea had been recorded as 2 degree Celsius above the freezing temperature.[18] The discovery was a part of the International Thwaites Glacier Collaboration, a partnership primarily between US and UK academic institutions. This study has raised alarm regarding the glacier collapse, which can lead to nearly 3 ft (0.9 m) rise in the sea level.[19]

Extensive calving at the marine terminus of Thwaites Glacier is monitored by remote sensing and seismological observations, with the largest events being seismically detectable at ranges up to 1600 km.[20]

Water drainage beneath the glacier

Swamp-like canal areas and streams underlie the glacier. The upstream swamp canals feed streams with dry areas between the streams which retard flow of the glacier. Due to this friction the glacier is considered stable in the short term.[21]

A 2014 University of Washington study, using satellite measurements and computer models, predicted that the Thwaites Glacier will gradually melt, leading to an irreversible collapse over the next 200 to 1000 years.[22][23][24][25][26][27]

A 2021 study suggested that the Thwaites Ice Shelf, which currently restrains the eastern portion of the Thwaites Glacier, could start to collapse within five years, leading to the contribution to sea level rise from the eastern portion increasing and eventually becoming equivalent to that of the other, undefended portions of the glacier.[9] Scientists do not assert that the entire glacier will collapse within 5 years, but that the ice shelf which rests on the ocean and restrains the eastern portion of the Thwaites Glacier. The floating ice shelf acts as a brace that prevents faster flow of the upstream ice.[28] This would mean an increased outflow from the glacier and thus an increased contribution to sea level rise by 26 inches (66 cm)[1] (increasing from 4% of sea level rise to 5% of sea level rise in the short term).[8][10] Under the hypothesis of marine ice cliff instability, the exposing of tall cliffs from the ice shelf’s failure may lead to a chain reaction of collapse over centuries,[28] although the veracity of this hypothesis has been disputed by other studies.[29][30][31]

According to Ted Scambos, a glaciologist at the University of Colorado Boulder and a leader of the International Thwaites Glacier Collaboration, in a late 2021 interview from McMurdo Station, “Things are evolving really rapidly here. It’s daunting.”[17] At a meeting of the American Geophysical Union in New Orleans, Louisiana in December the situation was described as worrisome.[32]