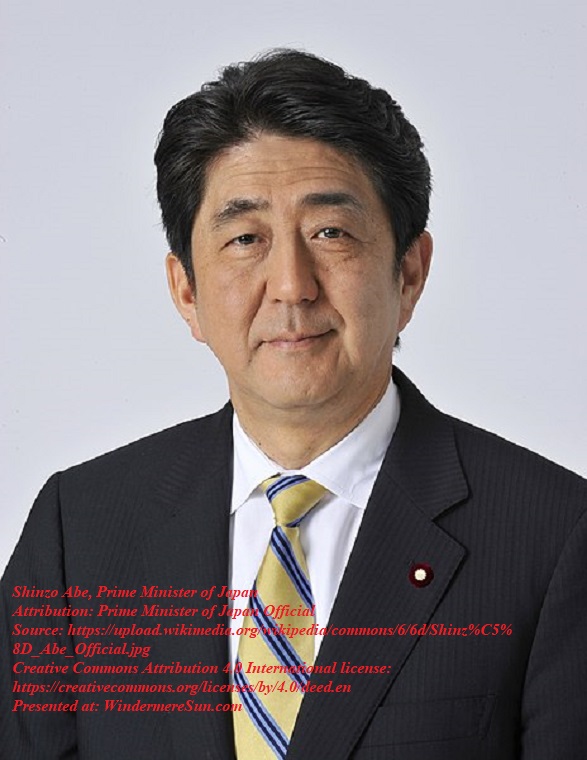 To learn more about Shinzo Abe, please refer to excerpt from wikipedia, in italics, below:

Shinzo Abe (安倍 晋三, Abe Shinzō, pronounced [abe ɕindzoː]; 21 September 1954 – 8 July 2022) was a Japanese politician who served as prime minister of Japan and President of the Liberal Democratic Party (LDP) from 2006 to 2007 and again from 2012 to 2020. He was the longest-serving prime minister in Japanese history.[1][2] Abe also served as Chief Cabinet Secretary from 2005 to 2006 under Junichiro Koizumi and was briefly leader of the opposition in 2012.

Born into a prominent political family, Abe was elected to the House of Representatives in the 1993 election. He was appointed Chief Cabinet Secretary by Prime Minister Junichiro Koizumi in September 2005, before replacing him as prime minister and LDP president in September 2006. He was subsequently confirmed as prime minister by a special session of the National Diet, becoming Japan’s youngest post-war prime minister, and the first to have been born after World War II. Abe resigned as prime minister just after one year in office due to medical complications from ulcerative colitis, shortly after his party lost that year’s House of Councillors election. He was replaced by Yasuo Fukuda, who became the first in a series of five prime ministers who each failed to retain office for more than sixteen months.

After recovering from his illness, Abe staged an unexpected political comeback by defeating Shigeru Ishiba, the former defense minister, in a ballot to become LDP president for the second time in September 2012. Following the LDP’s landslide victory in the general election that December, he became the first former prime minister to return to the office since Shigeru Yoshida in 1948. He led the LDP to two further landslides in the 2014 and 2017 elections, becoming Japan’s longest-serving prime minister. In August 2020, Abe announced his second resignation as prime minister, citing a significant resurgence of his ulcerative colitis.[3] He tendered his resignation on 16 September, upon the Diet electing Chief Cabinet Secretary Yoshihide Suga as his successor.[4]

Abe was a conservative whom political commentators widely described as a right-wing Japanese nationalist.[5][6][7][8][9] A member of the Nippon Kaigi,[10] he held negationist views on Japanese history,[11] including denying the role of government coercion in the recruitment of comfort women during World War II,[12] a position which created tension particularly with neighboring South Korea.[13][14] He was considered a hard-liner with respect to Japan’s military policies. In 2007, he was the initiator of the Quadrilateral Security Dialogue (QUAD) during his first tenure as prime minister, aimed at resisting China’s rise as an economic and military superpower.[15] He advocated reforming the Japan Self-Defense Forces (JSDF) by revising Article 9 of the pacifist Japanese constitution that outlawed the country from declaring war or acquiring ballistic missiles and nuclear weapons.[16][17] He enacted military reforms in 2015 that allowed Japan to exercise collective security and JSDF deployments overseas, the passage of which was controversial and met with large protests.[18] Abe’s premiership was also known for his attempts to counter Japan’s economic stagnation, nicknamed “Abenomics“.[5][19] In 2019, Abe’s government initiated a trade war with South Korea.[20]

Abe was assassinated on 8 July 2022 in Nara by a former Japan Maritime Self-Defense Force (JMSDF) member who used a homemade firearm resembling a double-barreled shotgun. Abe had been delivering a campaign speech near the north exit of Yamato-Saidaiji Station in support for fellow LDP party member Kei Satō for the House of Councillors election.[21]

Japan is in deep shock after the assassination of Shinzo Abe – the country’s longest serving prime minister, in the video publishsed on July 8, 2022, “Shinzo Abe shooting: Man arrested after fatal attack on former Japanese PM“, below: