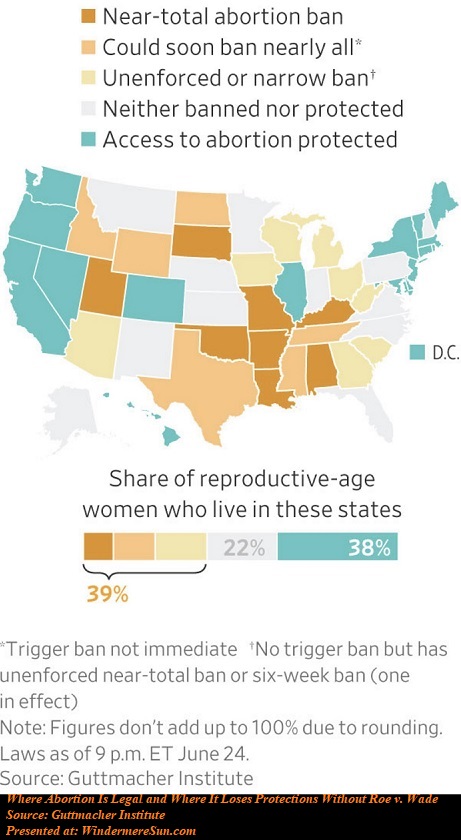 Map of Where Abortion Is Legal and Where It Loses Protections Without Roe v. Wade (Attribution/Source: Guttmacher Institute, Presented at: WindermereSun.com)

Many of our readers wanted more information on the aftermath of U.S. Supreme Court decision in overturning Roe v. Wade.  So allow me to share some key data points and resources provided by Guttmacher Institute, post- June 24, 2022, in italics, below:

Map of Where Abortion Is Legal and Where It Loses Protections Without Roe v. Wade (Attribution/Source: Guttmacher Institute, Presented at: WindermereSun.com)

“The US Supreme Court has taken the radical step of overturning Roe v. Wade outright, thus unleashing uncertainty and harm onto people asking for nothing more than to exercise their fundamental right to bodily autonomy.

“Roe v. Wade was under attack since the moment it was decided in 1973. While imperfect in its ability to protect reproductive rights, as evidenced by the steady erosions of these rights in many states, Roe enabled tens of millions of people in the United States to decide their own future and protect their well-being.

“Without Roe, 26 states are certain or likely to ban abortion to the fullest extent possible, including 13 states that have “trigger” laws in place that will automatically enact bans—some within days or even hours of today’s decision.

“Decades of research consistently show that abortion bans and restrictions don’t reduce unintended pregnancy or demand for abortion, and they certainly do not help people improve their health. Rather, they impose significant hurdles to obtaining care, causing stress for people in need of abortion and leading some to experience forced pregnancy and all its troubling consequences.”

The U.S. Supreme Court on Friday overturned Roe v. Wade, the 1973 decision that had provided a constitutional right to abortion. The ruling is expected to lead to abortion bans in roughly half the states, in the video published on June 24, 2022, “With Roe v. Wade overturned, here are the states set to ban abortion, below:

CNN’s Tom Foreman explains different trigger laws in different states and when and how they will go into effect, in the video published on June 24, 2022, “Roe v. Wade is overturned. How does this affect you?” below: