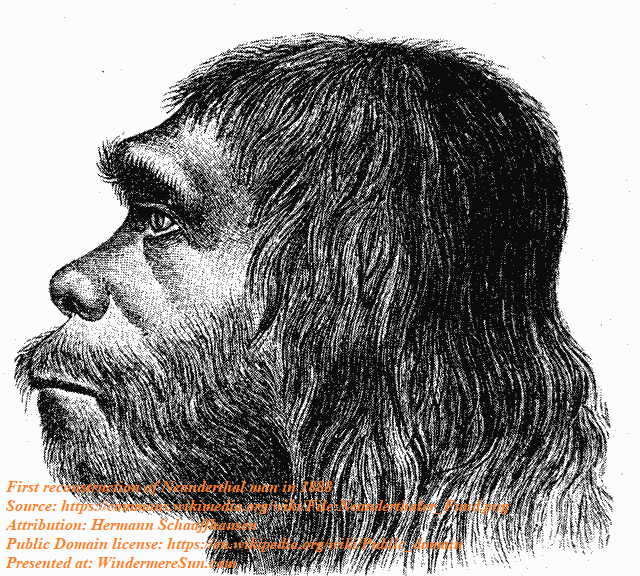 According to Dr. John Campbell’s report, Neanderthal gene probably caused up to a million Covid deaths, discussed in the video published on June 10, 2022, “Genetics and covid deaths“, below:

To better understand Neanderthal, please refer to excerpt from wikipedia, in italics, below:

Neanderthals (/niˈændərˌtɑːl, neɪ-, –ˌθɑːl/,[7] also Neandertals, Homo neanderthalensis or Homo sapiens neanderthalensis)[8] are an extinct species or subspecies of archaic humans who lived in Eurasia until about 40,000 years ago.[9][10][11][12] While the cause of their extinction remains “highly contested”, demographic factors like small population size, inbreeding, and random fluctuations are considered likely factors.[13][14] Other scholars have proposed competitive replacement,[15] assimilation into the modern human genome (bred into extinction),[16] great climatic change,[17][18][19] disease,[20][21] or a combination of these factors.[19]

It is unclear when the line of Neanderthals split from that of modern humans; studies have produced various intervals ranging from 315,000[22] to more than 800,000 years ago.[23] The time of divergence of Neanderthals from their ancestor H. heidelbergensis is also unclear. The oldest potential Neanderthal bones date to 430,000 years ago, but the classification remains uncertain.[24] Neanderthals are known from numerous fossils, especially from after 130,000 years ago.[25] The type specimen, Neanderthal 1, was found in 1856 in the Neander Valley in present-day Germany. For much of the early 20th century, researchers depicted Neanderthals as primitive, unintelligent, and brutish. Although knowledge and perception of them has markedly changed since then in the scientific community, the image of the unevolved caveman archetype remains prevalent in popular culture.[26][27]

Neanderthal technology was quite sophisticated. It includes the Mousterian stone-tool industry[28][29] and the ability to create fire[30][31] and build cave hearths,[32][33] make the adhesive birch bark tar,[34] craft at least simple clothes similar to blankets and ponchos,[35] weave,[36] go seafaring through the Mediterranean,[37][38] and make use of medicinal plants,[39][40][41] as well as treat severe injuries,[42] store food,[43] and use various cooking techniques such as roasting, boiling,[44] and smoking.[45] Neanderthals made use of a wide array of food, mainly hoofed mammals,[46] but also other megafauna,[26][47] plants,[48][49][50] small mammals, birds, and aquatic and marine resources.[51] Although they were probably apex predators, they still competed with cave bears, cave lions, cave hyaenas, and other large predators.[52] A number of examples of symbolic thought and Palaeolithic art have been inconclusively[53] attributed to Neanderthals, namely possible ornaments made from bird claws and feathers[54][55] or shells,[56] collections of unusual objects including crystals and fossils,[57] engravings,[58] music production indicated by the Divje Babe flute,[59] and Spanish cave paintings contentiously[60] dated to before 65,000 years ago.[61][62] Some claims of religious beliefs have been made.[63] Neanderthals were likely capable of speech, possibly articulate, although the complexity of their language is not known.[64][65]

Compared with modern humans, Neanderthals had a more robust build and proportionally shorter limbs. Researchers often explain these features as adaptations to conserve heat in a cold climate, but they may also have been adaptations for sprinting in the warmer, forested landscape that Neanderthals often inhabited.[66] Nonetheless, they had cold-specific adaptations, such as specialized body-fat storage[67] and an enlarged nose to warm air[68] (although the nose could have been caused by genetic drift[69]). Average Neanderthal men stood around 165 cm (5 ft 5 in) and women 153 cm (5 ft 0 in) tall, similar to pre-industrial modern humans.[70] The braincases of Neanderthal men and women averaged about 1,600 cm3 (98 cu in) and 1,300 cm3 (79 cu in) respectively,[71][72][73] which is within the range of the values for modern humans. The Neanderthal skull was more elongated and had smaller parietal lobes[74][75][76] and cerebellum,[77][78] morphological traits used to assign specimens to species.

The total population of Neanderthals remained low, proliferating weakly harmful gene variants,[79] and precluding effective long-distance networks. Despite this, there is evidence of regional cultures and thus of regular communication between communities.[80][81] They may have frequented caves, and moved between them seasonally.[82] Neanderthals lived in a high-stress environment with high trauma rates, and about 80% died before the age of 40.[83] The 2010 Neanderthal genome project‘s draft report presented evidence for interbreeding between Neanderthals and modern humans.[84][85][86] It possibly occurred 316–219 thousand years ago,[87] but more likely 100,000 years ago and again 65,000 years ago.[88] Neanderthals also appear to have interbred with Denisovans, a different group of archaic humans, in Siberia.[89][90] Around 1–4% of genomes of Eurasians, Australo-Melanesians, Native Americans, and North Africans is of Neanderthal ancestry, while the inhabitants of sub-Saharan Africa have only 0.3% of Neanderthal genes, save possible traces from early Sapiens-to-Neanderthal gene flow and/or more recent back-migration of Eurasians to Africa. In all, about 20% of distinctly Neanderthal gene variants survive today.[91] Although many of the gene variants inherited from Neanderthals may have been detrimental and selected out,[79] Neanderthal introgression appears to have affected the modern human immune system,[92][93][94][95] and is also implicated in several other biological functions and structures,[96] but a large portion appears to be non-coding DNA.[97]