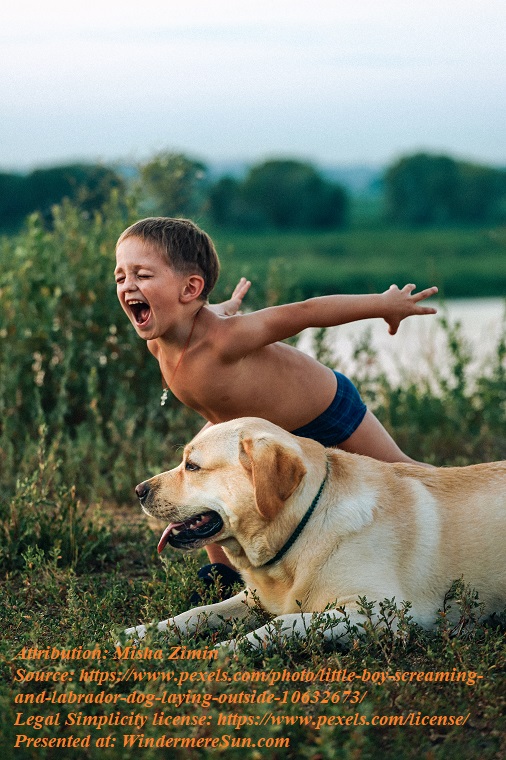 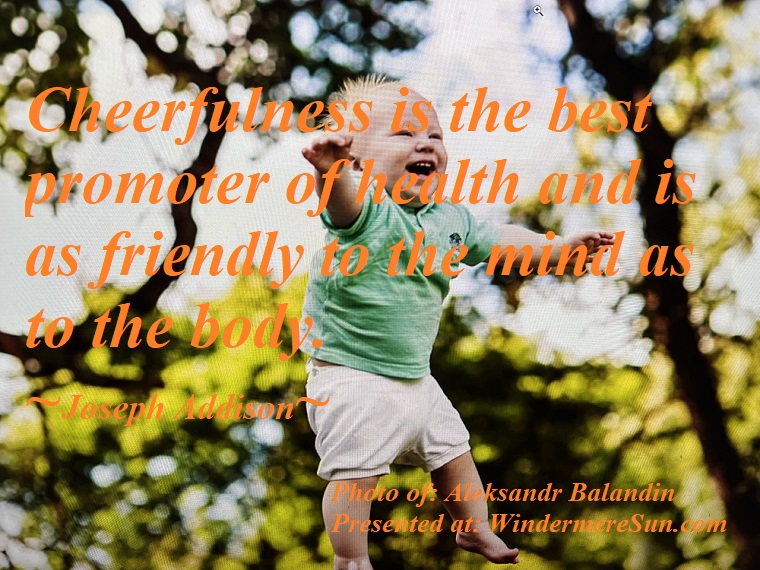 Quote of 6/11/2022, “Cheerfulness is the best promoter of health and is as friendly to the mind as to the body.” (Quote of : Joseph Addison, Photo of: Aleksandr Balandin, Presented at: WindermereSun.com)

Such exuberance for life!

Quote of 6/11/2022, “Cheerfulness is the best promoter of health and is as friendly to the mind as to the body.” (Quote of : Joseph Addison, Photo of: Aleksandr Balandin, Presented at: WindermereSun.com)

Joseph Addison once said, “Cheerfulness is the best promoter of health and is as friendly to the mind as to the body.”

To learn more about Joseph Addison, please refer to the excerpt from wikipedia, in italics, below:

Joseph Addison (1 May 1672 – 17 June 1719) was an English essayist, poet, playwright and politician. He was the eldest son of The Reverend Lancelot Addison. His name is usually remembered alongside that of his long-standing friend Richard Steele, with whom he founded The Spectator magazine. His simple prose style marked the end of the mannerisms and conventional classical images of the 17th century.[1]

In 1712, Addison wrote his most famous work, Cato, a Tragedy. Based on the last days of Marcus Porcius Cato Uticensis, it deals with conflicts such as individual liberty versus government tyranny, Republicanism versus Monarchism, logic versus emotion, and Cato’s personal struggle to retain his beliefs in the face of death. It has a prologue written by Alexander Pope and an epilogue by Samuel Garth.[7]

The play was a success throughout the British Empire. It continued to grow in popularity, especially in America, for several generations. It is cited by some historians as a literary inspiration for the American Revolution, being known to many of the Founding Fathers. General George Washington sponsored a performance of Cato for the Continental Army during the difficult winter of 1777–78 at Valley Forge. According to John J. Miller, “no single work of literature may have been more important than Cato” for the leaders of the American revolution.[8]

Scholars have identified the inspiration for several famous quotations from the American Revolution in Cato. These include:

(Supposed reference to Act II, Scene 4: “It is not now time to talk of aught/But chains or conquest, liberty or death.”).[9]

(Supposed reference to Act IV, Scene 4: “What a pity it is/That we can die but once to serve our country.”).[9]

(Clear reference to Act I, Scene 2: “‘Tis not in mortals to command success; but we’ll do more, Sempronius, we’ll deserve it.”).

In 1789, Edmund Burke quoted the play in a letter to Charles-Jean-François Depont entitled Reflections on the revolution in France, saying that the French people may yet be obliged to go through more changes and “to pass, as one of our poets says, ‘through great varieties of untried being,'” before their state obtains its final form.[10] The poet referred to is Addison and the passage quoted is from Cato (V.i. II): “Through what variety of untried being, through what new scenes and changes must we pass!”

Though the play has fallen from popularity and is now rarely performed, it was popular and often cited in the eighteenth century, with Cato being an example of republican virtue and liberty. John Trenchard and Thomas Gordon were inspired by the play to write an epistolary exchange entitled Cato’s Letters (1720–1723), concerning individual rights, using the name “Cato”.[citation needed]

The action of the play involves the forces of Cato at Utica, awaiting the attack of Caesar immediately following his victory at Thapsus (46 BC). The noble sons of Cato, Portius and Marcus, are both in love with Lucia, the daughter of Lucius, an ally of Cato. Juba, prince of Numidia, one of Cato’s warriors, loves Cato’s daughter Marcia. Meanwhile, Sempronius, a senator, and Syphax, a general of the Numidians, are conspiring secretly against Cato, hoping to prevent the Numidian army from supporting him. In the final act, Cato commits suicide, leaving his followers to make their peace with the approaching army of Caesar – an easier task after Cato’s death, since he was Caesar’s most implacable enemy.

It is as an essayist that Addison is remembered today. He began writing essays quite casually. In April 1709, his childhood friend Richard Steele started the Tatler. Addison contributed 42 essays to the Tatler, while Steele wrote 188. Regarding Addison’s help, Steele remarked, “when I had once called him in, I could not subsist without dependence on him”.[13] The Tatler was discontinued on 2 January 1711. The Spectator began publication on 1 March of that year, and it continued – being issued daily, and achieving great popularity – until 6 December 1712. It exercised an influence over the reading public of the time, and Addison soon became the leading partner in it, contributing 274 essays out of a total of 635; Steele wrote 236. Addison also assisted Steele with The Guardian, which began in 1713. Addison is the originator of the quote, “Reading is to the mind what exercise is to the body”. The quote can be found in Issue 147 of the Tatler.[14]

The breezy, conversational style of the essays later prompted Bishop Richard Hurd to reprove Addison for what he called an “Addisonian Termination”, or preposition stranding, a grammatical construction that ends a sentence with a preposition.[15] Alexander Pope in his 1735 Epistle to Dr Arbuthnot made Addison an object of derision, naming him “Atticus”, and comparing him to an adder, “willing to wound, and yet afraid to strike”

He wrote an essay entitled Dialogues on Medals which was translated to the French by eighteenth-century priest and journalist Simon-Jérôme Bourlet de Vauxcelles (1733–1802). His essay “Adventures of a Shilling” (1710) is a brief, early example of an it-narrative or object narrative, a genre that would become more common later in the century.[16] He also left an incomplete work, Of the Christian Religion.