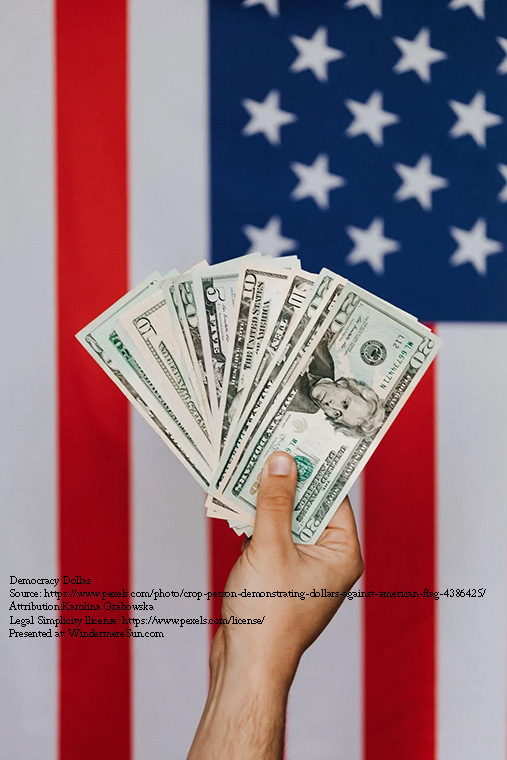 Our law makers really should take to heart the notoriety of the American gun laws and American gun culture. There needs to be universal criminal, mental, and health background checks before any gun purchase via any avenue (via gun stores, pawn shops, as well as gun shows, etc.). The fact that there were 20 mass shootings since Uvalde, TX massacre last week and more than 1900 mass shootings (many of which took place at elementary and secondary schools) since 2012 when no other country on planet earth has such atrocious record means that either lawmakers are not doing their jobs or have such great obstacles in being able to do their jobs that we need to remove the obstacles for them to do their jobs by reforming election campaign laws. If we are serious about wanting to bring back the power to the people and to prevent further carnage of the innocent American people, it is time to seriously consider and talk about introducing Democracy Dollars promoted by Andrew Yang. We are all sick and tired of these mass shootings! It is time to introduce Democracy Dollars so that we can elect people who would actually represent us in all 50 states, make laws that are actually good for the American people, and stop the killings of innocent American children and people!!!

In the video published on June 2, 2022, “At least four killed in Tulsa, Oklahoma shooting; gunman took his own life“, below:

New York Times columnist David Brooks and Washington Post associate editor Jonathan Capehart join William Brangham to discuss the week in politics, including President Biden’s plea for “common sense” gun reform amid a spate of mass shootings and the potential for legislation on Capitol Hill to address the issue, in the video published on June 3, 2022, “Brooks and Capehart on the wave of gun violence in America“, below:

New York Times columnist David Brooks and Washington Post associate editor Jonathan Capehart join Judy Woodruff to discuss the week in politics, including the potential for meaningful changes to federal gun regulations after the unspeakable tragedy at an elementary school in Uvalde, Texas, and former President Trump’s influence on primary races in Georgia and elsewhere, in the video published on May 27, 2022, “Brooks and Capehart on the tragedy in Uvalde and Georgia’s primary elections“, below:

The essence of Democracy Dollars is based on, in italics, below:

In the video published on Sep 22, 2020, “Democracy Dollars: Austinities for Progressive Reform“, below:

We need to diminish the influence that mega-wealthy individuals and companies have in our elections. While we must push for a Constitutional amendment to allow our campaign finance laws to properly limit the power that the top 1% have, we must act much faster to save our democratic processes. To do so, we must make it possible for all Americans to contribute to candidates they feel strongly about, in order to drown out the voices of the few who can spend millions of dollars to influence our politicians.

The easiest way to do this is to provide Americans with publicly funded vouchers they can use to donate to politicians that they support. Every American gets $100 a year to give to candidates, use it or lose it. These Democracy Dollars would, by the sheer volume of the US population, drown out the influence of mega-donors.

Imagine running for office when every American has $100 Democracy Dollars to give to their favorite candidate. Just 10,000 supporters could mean $1 million for your campaign. Once elected, you could act primarily in the interest of the people you represent instead of appeasing wealthy donors and corporations. Calling rich people for money is soul-crushing. We’d all be better off if politicians only needed to worry about representing the people that elected them.

Andrew Yang explains his “democracy dollars” plan after the Houston Democratic Debate on The Young Turks, in the video published on Sep 13, 2019, “Andrew Yang Explains Democracy Dollars at Houston Debate“, below:

Democratic presidential candidate Andrew Yang attends the “‘We The People’ Protecting our Democracy a Decade After Citizens United” presidential candidate forum in Des Moines, Iowa. The event was sponsored by the Brady Campaign to Prevent Gun Violence, Common Cause, End Citizens United, MoveOn, NAACP, People for the American Way, Progress Iowa and Public Citizen, in the video published on Jan 19, 2020, “CAMPAIGN 2020: Andrew Yang wants ‘Democracy Dollars’ to return power to the people“, below:

“The House of Representatives, where Congress gathers to hear the president, used to be known as ‘The Peoples’ House’,” Bill says in this broadcast essay, “but money power owns the lease now, and runs the joint from hidden back rooms.” Bill also spotlights Congressional leaders from both parties whose connections and possible allegiances to deep-pocketed backers makes one wonder who’s really running our government, and buying our democracy, in the video published on Feb 15, 2013, “Bill Moyers Essay: Democracy for Dollars“, below:

Small-donor campaign financing has a proven record of dramatically increasing citizen engagement and empowering communities to fill their ballot with candidates who represent their values and their voice. Several communities across the country have adopted public financing with great success. But as a reform, it lacks the power of a national champion. By volunteering to help tell the story of how we can transform our elections, we’re trying to do our part to educate voters and drive our democracy forward. Find out more and sign up to join the cause at DemocracyDollars.info! In the video published on Feb 5, 2022, “Democracy Dollars: Driving Us Forward“, below:

Finally, we are all sick and tired of these mass shootings! Time to introduce Democracy Dollars so that we can elect people who would actually represent us in all 50 states and make laws that are actually good for the American people in order to stop the killings of innocent American people!!!

To better understand Democracy Dollars (aka Democracy Voucher), please refer to excerpt from wikipedia, in italics, below:

A democracy voucher is a method of public financing of political campaigns used in municipal elections in Seattle, Washington, United States. It was approved in 2015 and debuted during the 2017 election cycle. The program provides city residents with four vouchers, each worth $25, that can be pledged to eligible candidates running for municipal offices. It is funded by a property tax and is applied on a first-come, first-served basis.

A similar plan was put forward by the 2020 presidential campaign of Andrew Yang. The campaign’s “Democracy Dollars” would have given each registered voter $100 to put towards the political campaign of their choice annually.[citation needed]

In 2016 in a statewide ballot initiative, South Dakota voters supported a bill that included provisions for democracy vouchers as part of a larger ethics reform bill called “the government accountability and anti-corruption act“. The democracy voucher part of this bill provided voters two $50-dollar vouchers to be given to state candidates.[9] The bill passed with over 51% of the vote, but South Dakota Republicans repealed the bill in early 2017. An “emergency clause” was included in the repeal preventing resubmission of the ballot initiative.[10]

Supporters argue that the program makes campaign donors more representative of the overall population,[11] lets candidates fundraise for competitive campaigns without relying on big money,[12] and limits the influence of special interests over elected officials.[4]

Opponents claimed that, because the vouchers would be distributed ten months before the general election and were assigned on a first come, first served basis, the program would largely benefit incumbent political candidates rather than challengers, because the latter typically launch their campaigns at a later date than incumbents. As a result, incumbents might receive all funds from the program, with available money completely depleted by the time challengers were able to organize campaigns.[4]

You may also be interested in reading these articles below: