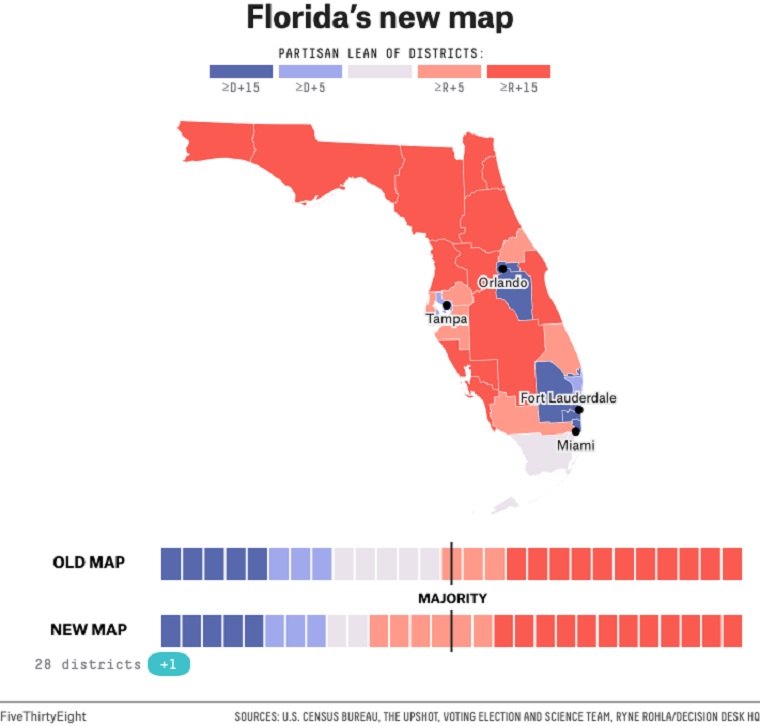 The last major piece in the national redistricting puzzle was completed on Thursday, April 21, 2022. Florida legislature caved to Governor Ron DeSantis’s wishes and passed one of his proposed congressional maps, benefitting DeSantis’s  reputation and ambition while creating a dream map for partisan Republicans by adding four new Republicans to the U.S. House of Representatives. Such an extremely biased Congressional map may potentially maximize Republican power, but it may also be the map’s undoing in court.

The Florida House has passed a new congressional map drawn by Republican Gov. Ron DeSantis after state Democrats shut down the state house in protest. NBC’s Maura Barrett has details, in the video published on April 21, 2022, “Florida Passes Congressional Map Drawn By DeSantis After Democratic Shutdown“, below:

This new congressional map will significantly shake up Florida’s congressional delegation, virtually guaranteeing that Democrats will lose three of their House seats in Florida: The 7th District goes from a D5 partisan lean to R+14, the 13th District now has a partisan lean of R+12, and Rep. Al Lawson’s North Florida district is completely refigured into a solidly Republican seat. Furthermore, the new congressional seat that Florida gained from the 2020 census, the 18th, is now dark red in this new map, for a GOP gain of four seats in total. This is about as big of a Republican bias that Florida’s congressional map could possibly have, and the most partisan map in the country. The map has an efficiency gap of R+20, meaning the Republicans would be expected to win 20% more seats under this map than under a hypothetical, perfectly fair map. Since Florida has 28 congressional districts/seats, translating to a 5.7 Republican bias.

Democrats will likely argue that the recently signed congressional map violates the 15th Amendment to the United States Constitution that was added following Civil War, prohibiting some one’s right to vote based on race. This map calls for adding 4 Republican majority districts while stripping away 3 Democrats-held districts, to give Republicans 70% control. If a challenge is filed, the federal court is likely to reach a decision soon given the upcoming election year.

Democrats held press conferences around the state to protest the Florida Legislature’s passage of the state’s redistricting map. Many critics of the map say it heavily favors Republicans and doesn’t properly reflect the state’s demographics, in the video published on April 22, 2022, “Florida Democrats plan to take legal action after passing of new congressional map“, below:

Several voting rights groups, including League of Women Voters, arguing that the map violates the Florida state’s law by gerrymandering districts in favor of GOP,  now have filed law suits against the new map even before Governor DeSantis signed it into law.

Black Democrats in the Florida House today disrupted debate on the congressional redistricting map drawn by Gov. DeSantis’ staff. The map is expected to reduce the number of Black Democratic members in Congress and increase the number of Republicans. Dianne Hart, a Tampa Democrat, broadcast the sit-in live on Facebook. Republicans used social media to express their displeasure over the sit-in. About an hour into the protest, House Republicans moved ahead with a vote, approving the map, then passed a bill to remove Disney’s special districts along a party lines. House Speaker Chris Sprowls then adjourned, in the video published on April 21, 2022, “Florida Democrats stage sit-in on House floor over Congressional redistricting map”, below:

It’s back to work on the redistricting maps to determine how you will vote later this fall. Florida lawmakers had put their efforts on hold to draw the maps as the governor asked for an opinion from the state Supreme Court. In the end of January , 2022, the court told Gov. Ron DeSantis it will not answer his question on whether a Black congressman’s district is unconstitutional. The governor had been pushing for a map that would make that district lean Republican and says he’s not backing down, in the video published on Feb 14, 2022, “What’s next for Florida redistricting after high court refuses to hear DeSantis’ case?“.

Fundamentally, the problem lies in the fact that we have an essentially winner-take-all two-party system, forever trending elected political officials to behave more and more extremely and forever dividing our nation further apart. The solution to problems associated with winner-take-all scenario (associated with having essentially two-party system) may be accomplished by: 1. having a system closer to that of a parliamentary system, with some of the powers of the executive branch to be reined in or given to Congress, with its powers checked by Congress and the courts in order to return U.S. Presidency to its proper constitutional role, as suggested in the book titled, The Cult of the Presidency: America’s Dangerous Devotion to Executive Power, by Gene Healy 2. having ranked-choice voting. Ranked-choice voting helps to avoid mud slinging during any election campaign, where all voters’ voices are more likely to be heard, and elections more likely to result in a centrist being elected rather than an extremist being elected into office.

In most parts of the United States, voters select a single candidate for each position on their ballot, and the candidate with the most votes wins. This is known as single-choice, winner-take-all, which can sometimes result in the election of a candidate who earned only a small percentage of the vote. But that’s not the only way of electing our leaders. Ranked choice voting is another voting method which allows voters to rank their favorite candidates in order of preference. Learn more by visiting www.fairvote.org. Animation created by Mikhaila Markham, in the video published on May 3, 2020, “What is Ranked Choice Voting?” below:

As New York voters cast their ballots in the city’s primary elections this year, they’ll have the option of ranking five candidates instead of choosing just one. It’s called ranked-choice voting, and its advocates say it promises to improve democracy as we know it. In a traditional voting system, voters select just one candidate. With ranked-choice voting, they rank candidates in order of preference. Here’s a closer look at how it works, in the video published on June 22, 2021, “Ranked-choice voting: How it works in the NYC mayor race and beyond“, below:

Rank choice voting lets voters choose candidates in order of preference instead of picking only one. New York City could be joining a handful of cities that vote like this in their local elections, in the video published on Nov 5, 2019, “What Is Rank Choice Voting?| NBC News Now“, below: