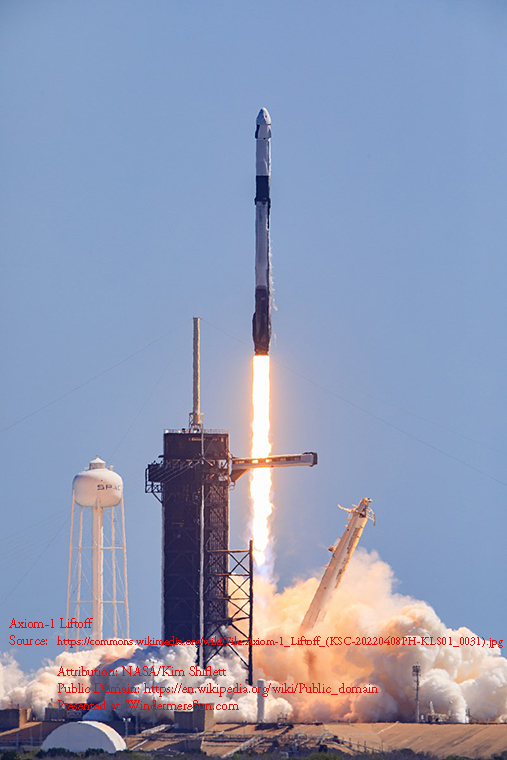 A SpaceX Falcon 9 rocket, carrying the company’s Crew Dragon spacecraft, lifts off from Launch Complex 39A at NASA’s Kennedy Space Center in Florida at 11:17 a.m. EST on April 8, 2022, on Axiom Mission 1 (Ax-1). Commander Michael López-Alegría of Spain and the United States, Pilot Larry Connor of the United States, and Mission Specialists Eytan Stibbe of Israel, and Mark Pathy of Canada are aboard the flight to the International Space Station. The Ax-1 mission is the first private astronaut mission to the space station. Axiom-1 Liftoff, Source: https://commons.wikimedia.org/wiki/File:Axiom-1_Liftoff_(KSC-20220408PH-KLS01_0031).jpg (Attribution: NASA/Kim Shiflett, Public Domain license: https://en.wikipedia.org/wiki/Public_domain, Presented at: WindermereSun.com)

SpaceX is expected to launch a crew of private citizens from the Kennedy Space Center for Axiom-1 mission on a flight to the International Space Station, in the video streamed on April 8, 2022, “WATCH: SpaceX launches first private astronaut mission to the ISS“, below:

To learn more about Axiom-1 mission, please refer to the excerpt from wikipedia, in italics, below:

Axiom Mission 1 (or Ax-1)[2] is a private crew mission to the International Space Station (ISS), operated by Axiom Space out of Axiom Space’s Mission Control Center (or MCC-A)[3] in Houston, TX. The flight launched on 8 April 2022, from Kennedy Space Center.[4] The crew consists of Michael López-Alegría,[5] a professionally trained astronaut hired by Axiom Space, Eytan Stibbe[6] from Israel,[7] Larry Connor from the United States[7] and Mark Pathy from Canada.[7]

The mission launched at 11:17 EDT on 8 April 2022.[4] It launched atop a Falcon 9 Block 5 launch vehicle from Kennedy Space Center‘s Launch Complex 39A (LC-39A), a NASA-owned launch pad leased to SpaceX for Falcon 9 launches. The mission is being flown aboard Crew Dragon Endeavour, which previously supported the Crew Dragon Demo-2 and  SpaceX Crew-2 missions.[25] From there the spacecraft will spend less than a day in transit to the station and dock with Harmony, where they will then spend eight days aboard the International Space Station (ISS).[26] Following their time on the ISS, the spacecraft will undock and return to Earth via a splashdown in the Atlantic Ocean.

During their planned eight days aboard the ISS, the private crew will be conducting more than 25 different research experiments.[27]

The Israeli mission segment is called Rakia, which means sky in Hebrew and is also the title of the book published with Ilan Ramon‘s diary fragments that survived the 2003 Space Shuttle Columbiadisaster.[28]

SpaceX and Axiom Space launched their first all-private joint mission to the International Space Station on Friday, April 8, 2022. NASA approved the mission, which is known as Axiom 1. CBS News’ Michelle Miller and Mola Lenghi discussed the historic launch with Jared Isaacman, the founder and CEO of the payment processing company Shift4 who also commanded Inspiration4, a privately chartered spaceflight that launched in 2021, in the video published on April 8, 2022, “SpaceX and Axiom Space launch first all-private joint mission“, below:

NASA Head of Human Space Flight Kathy Leuders joins Ed Ludlow ahead of SpaceX’s first all-private human spaceflight mission to the International Space Station amid high tension between Russia and the U.S., the world’s top space superpowers. She explains why this mission is part of a bigger-picture effort to have future private space stations in orbit in years to come, in the video published on April 7, 2022, “SpaceX to Launch Civilians to ISS“, below:

In the video streamed on April 8, 2022, “In full: SpaceX launches first private astronaut mission to the ISS“, below:

SpaceX and Houston-based Axiom Space have made history by launching the first mission to the International Space Station made up wholly of private citizens. The mission, known as Ax-1, marks a key breakthrough for both space tourism and the expanding commercial spaceflight industry, in the video published on April 8, 2022, “Watch: SpaceX, Axiom Launch First Private Mission to ISS“, below: