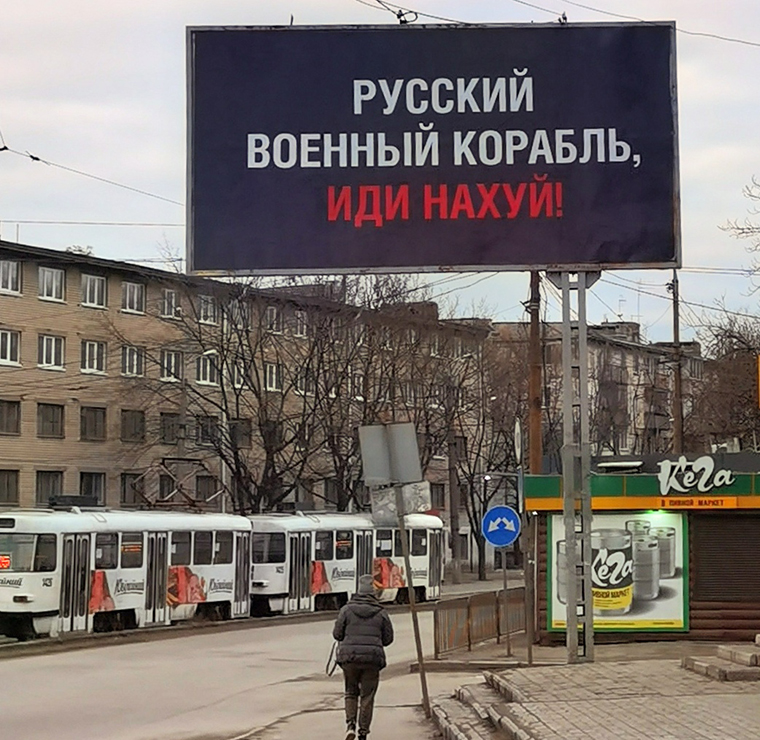 “Russian warship, go fuck yourself” – a phrase that became winged during the invasion of the Russian Armed Forces into the territory of Ukraine (the incident near Zmeinyi Island, Source: https://commons.wikimedia.org/wiki/File:Russian_ship,_go_f_yourself._Bright._2.jpg (Attribution: Alex Blokha, Creative Commons Attribution-Share Alike 4.0 International license, https://creativecommons.org/licenses/by-sa/4.0/deed.en, Presented at: WindermereSun.com)

A Russian landing ship has been destroyed and two other boats have been damaged in the occupied Ukrainian port city of Berdyansk, say Ukrainian officials. The Ukrainian military posted footage early on Thursday and said the Orsk had been hit by its forces. Details of what caused the explosion and fire on board the ship are unclear. Berdyansk, which is west of the besieged port of Mariupol, was seized four days after Russia invaded Ukraine. Russia says it has used the port as a base to ferry in equipment for its troops. Russian army TV hailed the arrival of the Orsk in Berdyansk last week as an “epic event” as it was the first Russian warship to dock there, in the video published on March 24, 2022, “Russian warship destroyed in occupied port of Berdyansk, says Ukraine – BBC News“, below:

Ukraine’s navy has claimed to have destroyed a large Russian landing ship near the port city of Berdiansk, in the video published on March 24, 2022, “Russian ship destroyed in port of Berdiansk, says Ukrainian navy“, below:

Ukraine’s military announced that it destroyed a Russian naval transport ship in the port of Berdyansk on March 24. It could not be immediately verified if the explosions resulted from a Ukrainian attack or another cause, in the video published on March 24, 2022, “Ukraine Claims Attack Destroyed Russian Naval Ship In Berdyansk Harbor“, below:

Dramatic CCTV footage from March 24 shows a Russian ship gutted by flames and explosions in the Ukrainian port of Berdyansk as a fire also burns on one of two naval ships leaving the area, in the video published on March 24, 2022, “Russian ship ‘destroyed’ at Berdyansk Port in Ukraine“, below:

CNN global affairs analyst Kimberly Dozier looks at Ukraine’s strategy to counter-attack against Russian forces, in the video published on March 23, 2022, “Analyst breaks down how Ukraine is turning the table son Russia“, below: