War In Ukraine:What’s Happening In Kyiv/ Russians & The World Protesting Against Putin’s Invasion Of Ukraine 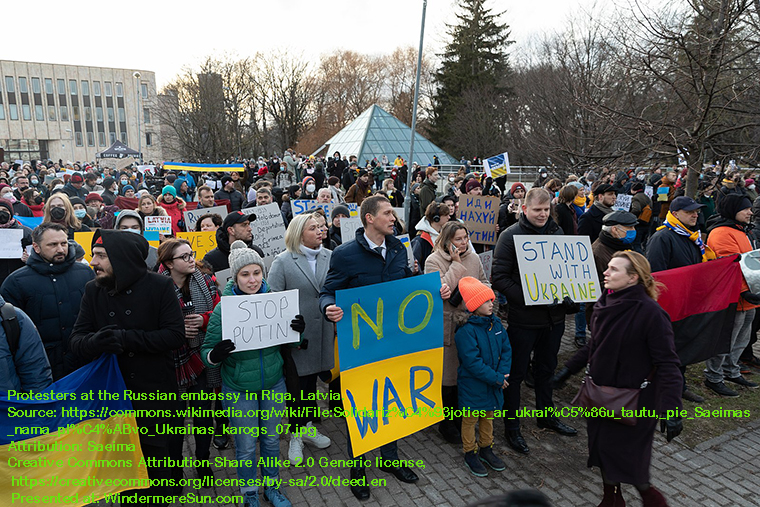 Below are updates from Ukrainian military TV (translated into English, in italics: below), Operative information as of 00.00, February 25, 2022:

The estimated losses of the enemy were: tanks -more than 30 units armored combat vehicles – up to 130 units, aircraft -7, helicopters – 6. keep calm follow the information on official resources together to victory. In the video published on Feb 24, 2022, “Operational information of the Ministry of Defence of Ukraine as of 00:00“, below:

Vladimir Putin has ordered Russian troops to invade Ukraine. What’s happening now and how will the war unfold? The Economist’s correspondent, Richard Ensor, reports from the Ukrainian capital, Kyiv, in the video published on Feb 24, 2022, “War in Ukraine: what’s happening in Kyiv?“, below:

In a late night speech on Thursday, Ukrainian President Volodymyr Zelenskiy vowed to stay in Kyiv as his troops battled Russian invaders who are advancing toward the capital in the biggest attack on a European state since World War Two, in the video published on Feb 24, 2022, “Ukraine’s president vows to stay put as Russian invaders approach“, below:

Protests broke out in more than 50 cities across Russia, according to an NGO. NBC News’ Keir Simmons is in Moscow, where some citizens say the invasion is “a tragedy” and are scared for relatives in Ukraine. Others are supporting President Putin, in the video published on Feb 24, 2022, “Russians Protest Putin’s Invasion of Ukraine“, below:

Anti-war protesters have taken to the streets in Moscow and St Petersburg to voice their opposition to their country’s military intervention in Ukraine. Protesters chanted slogans against the war and Russian president Vladimir Putin while police made arrests Thousands join anti-war protests in Russia after Ukraine invasion Stay or flee? Kyiv comes to terms with disaster of Russian invasion, in the video published on Feb 24, 2022, “Russian anti-war protesters face police crackdown and arrests“, below:

Russian police arrested over 1,7000 people at anti-war demonstrations across the country on Thursday, as authorities warned that any “negative comments” about Vladimir Putin’s invasion of Ukraine would be treated as “treason”. Celebrities, including those employed by state media, took the highly unusual step of speaking out against Russian aggression, despite the warning from officials. Riot police bundled demonstrators shouting “no to war”, or holding up posters, into packed vans as they rallied in the streets of Russia, in the video published on Feb 24, 2022, “Police arrests anti-war protesters in Russia“, below:

By just before 9pm, Ukraine’s health minister said 57 people had been killed as a result of the invasion, with 169 more wounded, in the video published on Feb 24, 2022, “How has Putin presented the Ukraine invasion to Russians and how have they reacted? | ITV News“

“Stop Putin, stop the war.” From Berlin to Beirut, protests erupted around the world to speak out against Russian President Vladimir Putin’s invasion of Ukraine. Russian President Vladimir Putin ordered what he described as a “special military operation” into Ukraine late on Wednesday and Ukrainian officials have said a “full-scale invasion” is underway, in the video published on Feb 24, 2022, “Russia Invading Ukraine Sparks Protests Across The World: ‘Stop Putin‘”, below: