Why Is Peace In Bosnia Under Threat? 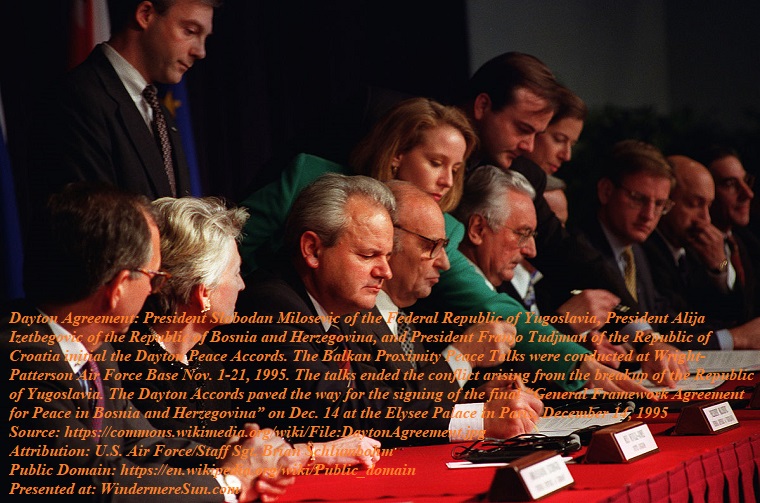 Dayton Agreement: President Slobodan Milosevic of the Federal Republic of Yugoslavia, President Alija Izetbegovic of the Republic of Bosnia and Herzegovina, and President Franjo Tudjman of the Republic of Croatia initial the Dayton Peace Accords. The Balkan Proximity Peace Talks were conducted at Wright-Patterson Air Force Base Nov. 1-21, 1995. The talks ended the conflict arising from the breakup of the Republic of Yugoslavia. The Dayton Accords paved the way for the signing of the final “General Framework Agreement for Peace in Bosnia and Herzegovina” on Dec. 14 at the Elysee Palace in Paris, December 14, 1995, Source: https://commons.wikimedia.org/wiki/File:DaytonAgreement.jpg, Attribution: U.S> Air Force/Staff Sgt. Brian Schlumbohm, Public Domain: https://en.wikipedia.org/wiki/Public_domain, Presented at: WindermereSun.com) 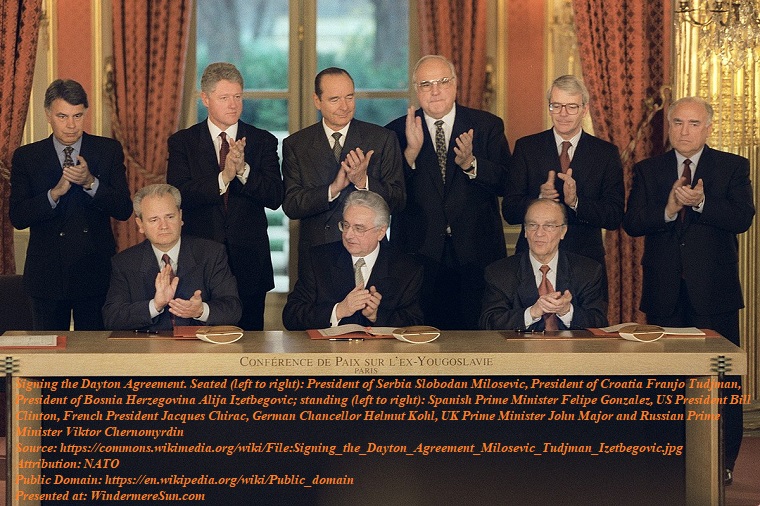 Bosnia is home to mainly three ethnic groups: 50% Bosniak (mostly Moslem), 30% Serb (mostly Orthodox Christians), and 15% Croat (mostly Catholics). The war in 1990’s was mainly due to ethnic division in Bosnia. After Yugoslavia broke up, there was a power vacuum and all ethnic groups started to fight each other over territories. In 1992, UN recognized Bosnia and Herzegovina as independents and that was disagreeable to Serbs.  Various Serb forces attacked and henceforth the beginning of the Serbian war. After about 100,000 people (more than 80% were Bosniaks or Moslems) were killed and atrocities committed by all sides, a UN tribunal called it a genocide.  In 1995, the peace agreement, Dayton Agreement, with the support from U.S. and EU, put an end to the three-and-a-half -year-long Bosnian War, one of the Yugoslav Wars. The agreement had been criticized for creating ineffective and unwieldy political structures and entrenching the ethnic cleansing of the previous war. The peace agreement that holds together Bosnia-Herzegovina is under threat from a rise in Serb nationalism, in the video published on Feb 9, 2022, “Fears of new conflict as Bosnia-Herzegovina faces growing Serb nationalism – BBC News“, below:

Almost 30 years after the U.S. forged a peace deal to end the war in Bosnia, the fragile, divided government is being tested like never before by Serb leader Milorad Dodik. CBS News reporter Anna Noryskiwicz has more from Sarajevo, in the video published on Feb 4, 2022, “Ethnic tensions rising again in Bosnia-Herzegovina“, below:

Bosnia is facing its most serious political crisis since the war ended in the 1990s. What’s going on? And why is Serb politician Milorad Dodik at the center of it all? In the video published on Jan 31, 2022, “Why peace in Bosnia is under threat | Start Here“, below:

The Balkans are currently facing their worst political crisis since the 1992-1995 war, which left more than 100,000 people dead. As the country seems to be breaking apart, will armed conflict return? The man threatening secession is Milorad Dodik, Bosnian Serb member of the Tripartite Presidency. He is pushing to withdraw the Republika Srpska entity from the country’s army, key political institutions, tax system, judiciary and create separate Serb institutions, in the video published on Jan 26, 2022, “Is Bosnia on the brink of war?” below:

It is being described as the most serious crisis in the Balkans region since the Bosnian war. It ended in 1995 after ethnic cleansing atrocities killed tens of thousands and forced millions to escape. The relative peace since then is being endangered by growing nationalistic rhetoric and a vote to split from Bosnia and Herzegovina. On Friday, Dec 10, 2021, politicians in the Bosnia Serb Republic voted to pull out of Bosnia and Herzegovina’s three major institutions – the armed forces as well as the legal and tax systems, in the video published on Dec 12, 2021, “Is another war brewing in the Balkans?| Inside Story“

Bosnia-Herzegovina’s future is in question as the Serb leader within the country’s tripartite presidency pushes to withdraw the Republika Srpska entity from the country’s army and key political institutions. People across Bosnia-Herzegovina – comprised of a Bosniak-Croat Federation and the Serb-run Republika Srpska – are waiting to see if Republika Srpska’s parliament will examine Dodik’s proposals for the enclave to be run by Serb-only institutions. Dodik’s announcement in October that Republika Srpska may quit Bosnia’s armed forces, judiciary body and tax authority marked a significant escalation in tensions between Serb leaders and their Bosniak and Croat counterparts. His stated aim to eventually set up a separate Serb army is already worrying Bosniak communities in Republika Srpska. The High Representative for Bosnia Christian Schmidt says that Dodik’s separatist plans risk destroying the 1995 Dayton Agreement that brought an end to a three-year international war between Serbs, Croats and Bosniaks, in which more than 100,000 people were killed. Schmidt warns of renewed conflict if the accord fails. In this episode of The Stream we’ll look at what Dodik’s proposals and the ensuing political crisis mean for Bosnia-Herzegovina’s future, in the video published on Dec 7, 2021, “Bosnia-Herzegovina: Is a split inevitable?| The Stream“, below: