Solar Power In Florida & What Needs To Be Done 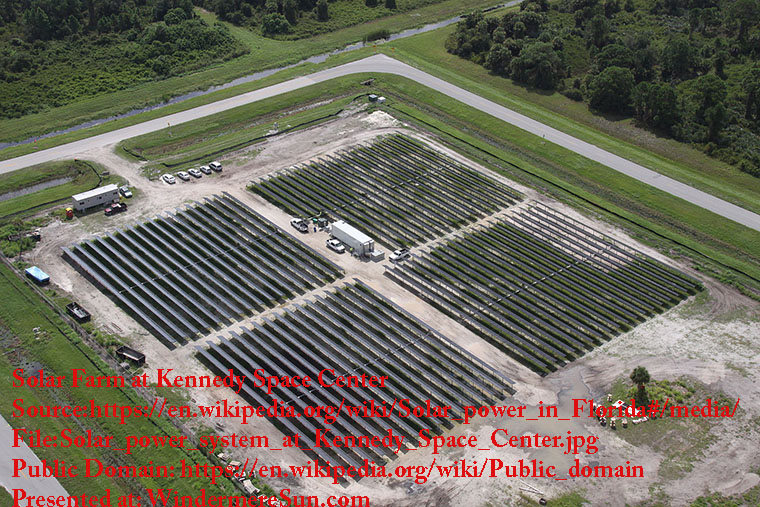 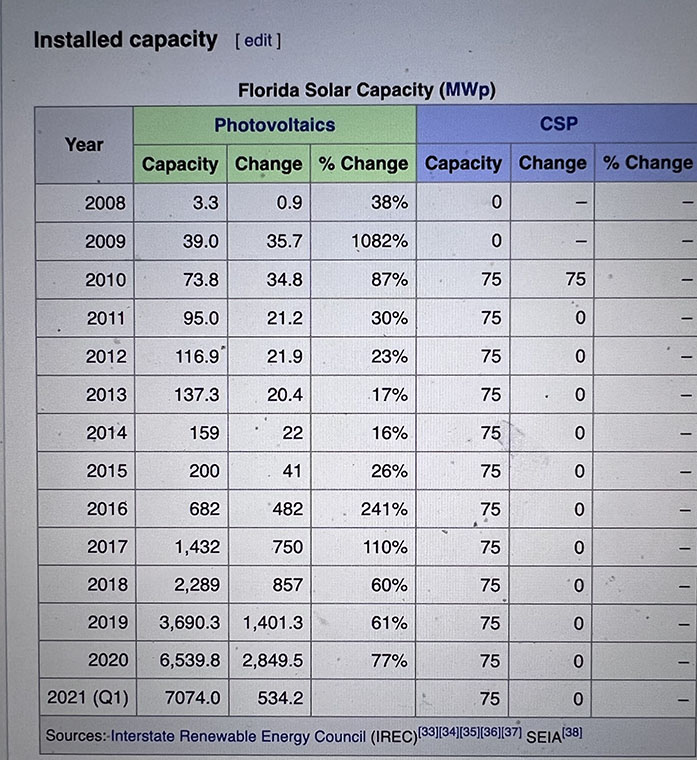 Recently, I’ve received a message from some one who thought the progress in solar installation of Florida is diminishing or dying. This is not true. Solar energy is going strong here in Florida as well as elsewhere. So allow me to share with you some data and information pertaining to Solar Power in Florida, from excerpt in wikipedia, in italics, below:

Solar power in Florida has been increasing, as the cost of solar power systems using photovoltaics (PV) has decreased in recent years. Florida has low electricity costs compared with other states, which makes individual solar investment less attractive.[1] Florida ranks ninth nationally in solar resource strength according to the National Renewable Energy Laboratory[2] and tenth in solar generation by the Solar Energy Industries Association.

In 2006, the State of Florida enacted the Florida Renewable Energy Technologies and Energy Efficiency Act, which provided consumers with rebates and tax credits for solar photovoltaic systems.[3] The program was closed in 2010.[4] Later, the Florida Public Service Commission mandated that the state’s large utilities offer individual solar rebates. The program opened in 2011 and was closed in 2015 after the Commission deemed it to not be cost-effective for non-solar customers.[5]

In 2008, Florida adopted a net metering rule that allows any electric utility customer generating up to 2 MW (2,000 kW) of power to use net metering, which provides a retail rate credit for kilowatt-hours of electricity delivered to the utility, rolled over from month to month, and paid out in cash by the utility once a year at the avoided cost rate.[6]

The federal Residential Energy Efficient Property Credit (income tax credit on IRS Form 5695) for residential PV and solar thermal was extended in December 2015 to remain at 30% of system cost (parts and installation) for systems put into service by the end of 2019, then 26% until the end of 2020, and then 22% until the end of 2021. It applies to a taxpayer’s principal and/or second residences, but not to a property that is rented out. There is no maximum cap on the credit, and the credit can be applied toward the Alternative Minimum Tax, and any excess credit (greater than that year’s tax liability) can be rolled into the following year.[7][8]

In 2009, Florida Power & Light built the state’s first solar power plant, the FPL DeSoto Next Generation Solar Energy Center. At the time, the 25-MW plant was the largest of its kind. In 2010, FPL built the world’s first hybrid solar-natural gas energy center.[9][10]

The state’s largest solar plant is the 75 MW FPL Martin Next Generation Solar Energy Center, in Martin County operated by Florida Power and Light. It was the world’s first hybrid solar-natural gas energy center[11] and is a concentrated solar power (CSP) plant using solar thermal instead of photovoltaic technology. No additional CSP plants are under development in Florida, although in 2007 a 300 MW fresnel CSP plant had been planned.[12]

The 100 MW Sorrento Solar Farm was expected to become Florida’s largest photovoltaic solar farm with 40 MW of photovoltaic capacity already under construction in Lake County. However the company Blue Chip Energy became insolvent and the equipment and farm site was sold at a public auction in 2013.[16][17]

Tampa Electric Company is building a 2 MW farm at the Tampa International Airport. Gulf Power Company and the U.S. military announced contracts for the construction of 3 large plants in Florida: a 50 MW project at Saufley Field in Pensacola, a 40 MW project being at Holley Field in Navarre, and a 30 MW project at Eglin Air Force Base.[19]

Set to go live on January 1, 2018, the 20-megawatt Tallahassee Solar Farm is still currently under construction on 120 acres of the property of Tallahassee International Airport (TLH). Even though it has reached capacity a second solar farm is being planned for the city.[21]

In April 2018, a new Florida town just north of Fort Myers called Babcock Ranch, began attempting to become fully solar-powered. Florida Power and Light partnered with town founders to build a 75-megawatt solar-generating facility that’s already running. The land was purchased in 2006 and more than 90% is being preserved for wildlife. The town’s developers hope its success will keep the federal government from imposing high tariffs on solar energy, and keep the energy source in private hands. Babcock Ranch developer Syd Kitson has said that Florida has done a good job of embracing solar energy.[24]

Tampa Electric currently has a plan to build a 350-acre solar farm in rural Pasco County which is being challenged by neighbors who oppose the project for visual aesthetic reasons. A county ordinance has been proposed restricting where solar farms can be located in the future.[25]

Developers in Florida have announced the addition of solar panels on all new homes in several subdivisions.[26]

In 2013, it was discovered that Blue Chip Energy was selling fraudulent solar panels to hundreds of consumers throughout Florida.[27]

Solar energy is the state’s most abundant energy resource and estimates have placed the state’s potential at 2,902 GW, which would produce about 5,274,479 GWh,[28] an amount much larger than the state and countries’s total electricity consumption of 231,210 GWh and 4,125,060 GWh in 2010.[29][30] Florida is one of only two states with no potential for conventional wind power, the other being Mississippi,[31] and will need to either import energy from other states during overcast days and at night, or provide adequate grid energy storage. Most of the potential is from photovoltaics, which provides no storage. The state has some potential for concentrated solar power, but the potential is estimated at 0.13 GW.[28] Taller, 140 meter hub height wind turbines allow up to 153 GW of wind turbines in Florida.[32]

With the current rate of growth for installed solar capacity, Florida will be able to reach 100% solar power capacity by 2030.

It is also necessary to evolve from net metering to incentive for battery as well as for solar panels rather than just incentive to install solar panels.

There are some people in Floria who want to preserve the net metering system, but that would not be the correct direction to go in the future. If net metering in Florida continues, then Florida will eventually run into the same problem that California is currently facing. But, instead, net metering needs to evolve into the next stage of the game by providing incentive not just for solar panels and batteries but also rate structure incentivizing for energy storage and allow utility companies to control when to pull and push energy from these batteries (so not to get into the situation that California is currently facing: Californians, Take Note About Your Solar Energy – Windermere Sun-For Healthier/Happier/More Sustainable Living). What is needed is incentive for solar panels and batteries and rate structure incentivizing energy storage, as the state of Hawaii and Hawaiian Electric had done here and below under Smart Export (Source: Hawaiian Electric, in italics below): Smart Export | Hawaiian Electric

Smart Export allows customers to install a private rooftop solar or other renewable system and a battery energy storage system. Customers are expected to charge the battery storage system from the rooftop solar or other renewable system during the daylight hours (9 a.m. – 4 p.m.) and use that energy to power their home in the evening.

However, customers are able to receive a credit for any energy exported to the grid during the evening, overnight and early morning hours. Energy exported to the grid during the daylight hours is not compensated. Under Smart Export, customers receive a monthly bill credit for energy delivered to the grid, which helps to offset the cost of energy pulled from the grid when the customer’s system is not producing enough energy to meet the household demand. The export credit is fixed through October 22, 2022.

Click here for information about how to read your Smart Export bill. (PDF)

*Export credits will be trued-up on an annual basis and any remaining credits left over at the end of the year expire with the utility cost reduction benefitting customers.

Smart Export above is about as close to perfect as any system/policy that had been implemented.

Let’s hear some of these Floridians’ experience, below:

In the video published on Aug 15, 2018, “Solar Energy Becoming Increasingly Popular In Florida As Homeowners Save Money On Power Bill“, below: