Fred Guttenberg For Val Demings For U.S. Senate In 2022 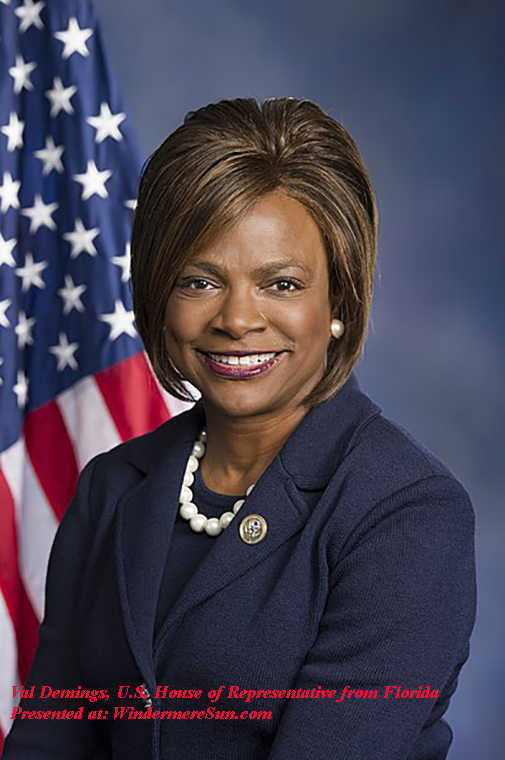 Few days ago, I’ve received a message from a Floridian by the name of Fred Guttenberg, excerpt in italics, below:

my name is Fred Guttenberg, and my daughter Jaime was one of the victims in the school shooting at Marjory Stoneman Douglas High School in Parkland, Florida.

Just one week after her murder, I confronted Marco Rubio at a town hall on gun safety. He couldn’t even look at me, and he refused to take action to limit access to assault rifles like the one that killed my Jaime.

I am all too familiar with Marco Rubio’s cowardice. We need an advocate with strength and dignity like Val Demings to replace him.

But Val Demings can only win with the grassroots support …  I can never get my Jaime back, but helping changemakers like Val Demings – a leader who has passed lifesaving gun safety legislation – gives me the purpose I’ve needed since her murder…

For how Fred Guttenberg began his public life and wrote the book, Find The Helpers, after the murder of his 14-year old daughter Jaime in the 2018 Parkland school shooting, please click HERE.

Congresswoman Val Demings announces her historic campaign to represent Florida in the U.S. Senate, in the video published on June 9, 2021, “Never Tire | Val Demings for U.S. Senate“, below:

So, let’s learn more about who Val Demings is and what she represents, excerpt from wikipedia, in italics, below :

Valdez Venita Demings (née Butler; born March 12, 1957) is an American politician serving as the U.S. representative from Florida’s 10th congressional district since 2017. The district covers most of the western half of Orlando and includes much of the area around Orlando’s resort parks. It includes many of Orlando’s western suburbs, including Apopka and Winter Garden. From 2007 to 2011, Demings was chief of the Orlando Police Department, its first female chief, capping a 27-year career with the department. She has also been first lady of Orange County, Florida, since December 4, 2018, when her husband Jerry Demings was sworn in as mayor.

Demings was the Democratic nominee to represent Florida’s 10th congressional district in Congress in both 2012 and 2016. After losing in 2012 to Republican incumbent Daniel Webster, she won in 2016 after the State Supreme Court mandated the creation of a new, majority-black district in Orlando.[1]

On January 15, 2020, Speaker Nancy Pelosi selected Demings to serve as an impeachment manager in the first Senate trial of President Donald Trump.[2] In early August 2020, Demings was said to be one of the top contenders to be Joe Biden‘s vice-presidential running mate in the 2020 United States presidential election, along with Kamala Harris and Susan Rice.[3] She is a candidate for the Democratic Party nomination in the 2022 United States Senate election in Florida.

Valdez Venita Butler was born on March 12, 1957,[4] one of seven children born to a poor family; her father worked as a janitor, her mother as a maid. They lived in Mandarin, a neighborhood in Jacksonville, Florida. She attended segregated schools in the 1960s, graduating from Wolfson High School in the 1970s.[5]

Demings became interested in a career in law enforcement after serving in the “school patrol” at Dupont Junior High School. She attended Florida State University, graduating with a degree in criminology in 1979.[5]

In 1996, Demings earned a master’s degree in public administration from Webster University Orlando.[6][7]

After graduating from college, Demings worked as a state social worker in Jacksonville for 18 months.[5]

According to a 2015 article in The Atlantic, the Orlando Police Department “has a long record of excessive-force allegations, and a lack of transparency on the subject, dating back at least as far as Demings’s time as chief.”[11] A 2008 Orlando Weekly exposé described the Orlando Police Department as “a place where rogue cops operate with impunity, and there’s nothing anybody who finds himself at the wrong end of their short fuse can do about it.”[12] Demings responded with an op-ed in the Orlando Sentinel, writing, “Looking for a negative story in a police department is like looking for a prayer at church”, adding, “It won’t take long to find one.” In the same op-ed, she cast doubt on video evidence that conflicts with officers’ statements in excessive force cases, writing, “a few seconds (even of video) rarely capture the entire set of circumstances.”[11]

In 2009, she had her firearm, a Sig Sauer P226R, stolen from her department vehicle while parked at her home; she was issued a written censure. The firearm has not been recovered.[13]

In 2010, an Orlando police officer flipped 84-year-old Daniel Daley over his shoulder after the man became belligerent, throwing him to the ground and breaking a vertebra in his neck.[14] Daley alleged excessive force and filed a lawsuit. The police department cleared the officer as “justified” in using a “hard take down” to arrest Daley, concluding he used the technique correctly even though he and the other officer made conflicting statements. Demings said “the officer performed the technique within department guidelines” but also that her department had “begun the process of reviewing the use of force policy and will make appropriate modifications.” A federal jury ruled in Daley’s favor and awarded him $880,000 in damages.[11][15][16][17][18]

The Democratic congresswoman running to unseat the Republican senator tells “The View” that Rubio is “afraid of a tough fight — I am not.” in the video published on June 22, 2021, “Val Demings Says “Marco Rubio Doesn’t Show Up” For Floridians | The View“, below:

“We frequently talk about the community and police as if they’re two separate entities,” Rep. Val Demings says. “The community is the police and the police are the community.” in the video published on June 22, 2021, “Val Demings on How Police and Community Are One Entity When It Comes To Police Reform | The View“, below:

Rep. Val Demings (D-FL) spoke at an event on Thursday, the anniversary of the Capitol riot, where lawmakers recalled their experiences on January 6th, 2021, in the video published on Jan 8, 2022, “Val Demings: ‘People At All Levels Knew’ That January 6th Attack Was Imminent“, below:

Demings was the Democratic nominee for the United States House of Representatives in Florida’s 10th congressional district in the 2012 elections.[21] She faced freshman Republican Daniel Webster in a district that had been made slightly more Republican than its predecessor in 2010. Demings narrowly lost, taking 48% of the vote to Webster’s 51%.[22]

Democrats attempted to recruit Demings to run against Webster again in 2014.[23] She decided to run for mayor of Orange County, Florida, against Teresa Jacobs, instead,[24] but dropped out of the mayoral race on May 20, 2014.[25]

In 2015, Demings announced her candidacy for the 10th district seat after a court-ordered redistricting made the 10th significantly more Democratic ahead of the 2016 elections.[26] Webster concluded the new 10th was unwinnable, and ran for reelection in the nearby 11th district.

In her 2018 reelection campaign, Demings was unopposed for a second term.[30]

On May 21, 2020, Demings confirmed she was on “the shortlist” to be Joe Biden‘s vice presidential nominee for the 2020 presidential election. She said she would accept the role if offered.[31] Some critics, including Black Lives Matter activists, attacked her record as Orlando police chief.[32][33] Kamala Harris was announced as Biden’s running mate on August 11, 2020. In November 2020, Demings was named a candidate for United States Secretary of Homeland Security in the Biden administration.[34]

Demings was sworn in on January 3, 2017. She is a member of the New Democrat Coalition[35] and the Congressional Black Caucus.[36]

In June 2021, Demings announced her candidacy for the Democratic nomination in Florida’s 2022 U.S. Senate election.[40]

Demings received a 70% rating from the American Civil Liberties Union for the 115th Congress.[44]

Demings has said that she seeks to keep firearms out of the hands of “people who seek to do harm”, saying that the gun control legislation she supports “isn’t about taking guns away from responsible, law-abiding people.”[45] She supported the Gun Violence Restraining Order Act of 2017, which would have provided a lawful method of temporarily confiscating firearms from people deemed to be a threat to themselves or others. Of the act, Demings said, “We must do what we can to make sure law enforcement has the tools it needs to more effectively perform the ever more challenging job of keeping us a safe nation. The Gun Violence Restraining Order Act is a major step to doing just that.”[46] After the Stoneman Douglas High School shooting in 2018, Demings opposed arming teachers, calling the idea “ridiculous”[47] and saying it would “only shift the responsibility from lawmakers to others. It shifts the pain, the hurt, and the guilt to school staff who will find themselves outskilled and outgunned in active shooter situations.”[46]

Demings has an “F” rating from the National Rifle Association (NRA).[48] She has accused the NRA of “hijacking” conversations after mass shootings in the United States to make them about the Second Amendment.[49]

Demings supports and has vowed to defend the Affordable Care Act.[50]

In June 2019 Demings released a congressional report on insulin prices, criticizing manufacturers for raising prices well beyond manufacturing costs, and said it was “inexcusable that American families are dying for the sake of corporate profit.”[51]

On December 18, 2019, Demings voted for both articles of impeachment against President Donald Trump.[52] She was selected as one of seven impeachment managers who presented the impeachment case against Trump during his trial before the United States Senate.[53]

On January 13, 2021, Demings voted for the single article of impeachment in the second impeachment of President Donald Trump.[54]

Demings’s husband, Jerry Demings, is mayor of Orange County, Florida, and the former Orange County Sheriff.[20] He served as the chief of the Orlando Police Department, the first African American to do so, from 1999 to 2002.[5][7] The two met on patrol in the OPD; they married in 1988 and have three children.[5]