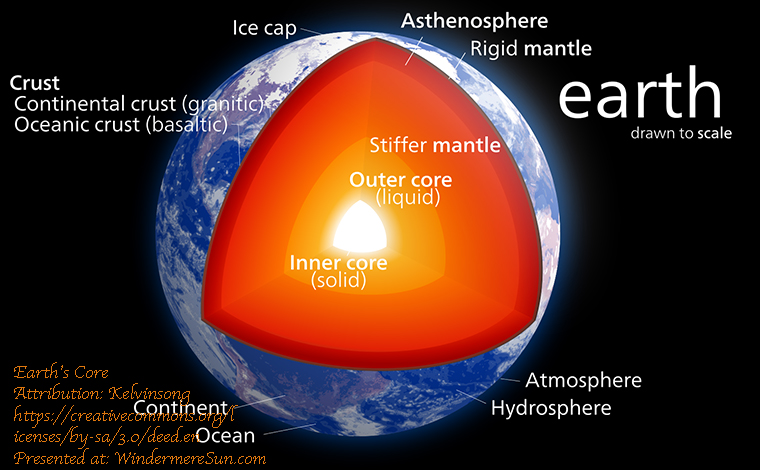 Earth’s interior is cooling faster than expected: Research team. A measuring system that measures the thermal conductivity of bridgmanite in the laboratory, under the pressure and temperature conditions that prevail inside the Earth, has been developed by a team of researchers. The study has been published in the ‘Earth and Planetary Science Letters Journal’. The evolution of our Earth is the story of its cooling: 4.5 billion years ago, extreme temperatures prevailed on the surface of the young Earth, and it was covered by a deep ocean of magma. Over millions of years, the planet’s surface cooled to form a brittle crust. However, the enormous thermal energy emanating from the Earth’s interior set dynamic processes in motion, such as mantle convection, plate tectonics and volcanism. Still unanswered, though, are the questions of how fast the Earth cooled and how long it might take for this ongoing cooling to bring the aforementioned heat-driven processes to a halt, in the video published on Jan 17, 2022, “Earth’s interior is cooling faster than expected: Research team“, below:

End of the world warning as Earth’s insides are cooling faster than scientists thought RESEARCHERS have warned that Earth’s interior has been cooling much faster than previously expected, bringing the planet closer to becoming a cold wasteland like Mars. Since its formation, the Earth has been releasing vast amounts of heat from deep inside Earth’s interior to the surface, which primarily drives mantle convection and a number of tectonic activities. The core-mantle boundary has played an essential role in this heat transfer process. This is the boundary where the hot molten core is in direct contact with solid-state mantle minerals and helps transfer the thermal energies of the core to the overlying mantle. In a study, scientists looked at how well this boundary mineral, called bridgmanite, could conduct heat from the core to the surface. They found that the boundary was able to dispense so much heat that scientists now believe that the earth is losing heat from its interior at a much faster rate than previously expected. When the Earth first formed about 4.5 billion years ago, the earth was covered by a deep ocean of magma, which then gradually cooled to form the crust we know today. Because the earth’s interior is still giving out heat, it will eventually cool down completely, turning the planet into a barren wasteland like Mars and Mercury. To recreate the effects of intense heat and pressure that the boundary faces between the mantle and the core, a team of scientists irradiated a single crystal of bridgmanite with pulsed lasers. This simultaneously increases its temperature to 2,440 Kelvin and pressure to 80 gigapascals, which is close to what we know to be the conditions in the lower mantle – up to 2,630 Kelvin and 127 gigapascals of pressure. Planetary scientist Motohiko Murakami, who led the study said: “This measurement system let us show that the thermal conductivity of bridgmanite is about 1.5 times higher than assumed.” Research suggests that this natural process of cooling for the earth’s core could be speeding up. When cooled down, bridgmanite turns into the mineral post-​perovskite. However as the amount of post-​perovskite increases in the core-mantle boundary, the cooling of the mantle might indeed accelerate even further. The researchers estimate that this mineral conducts heat even more efficiently than bridgmanite. Mr Murakami said: “Our results could give us a new perspective on the evolution of the Earth’s dynamics. “They suggest that Earth, like the other rocky planets Mercury and Mars, is cooling and becoming inactive much faster than expected.” However, scientists are still unable to figure out when the planet would cool down and become geologically inert. It is difficult to compare the Earth to Mars, as the Red Planet is significantly smaller than the earth, and hence cooling faster. Mr Murakami said: “We still don’t know enough about these kinds of events to pin down their timing, in the video published on Jan 17, 2022, “End of the world warning as Earth’s insides are cooling faster than scientists thought“, below:

Without the Earth’s core, would we be just another nameless planet? Deep beneath the Earth’s surface, there’s a scorching ball of iron surrounded by an ocean of boiling hot liquid metal – the Earth’s core. It’s as toasty as the surface of the Sun, with enough heat to brew more than a trillion cups of coffee per hour. That’s over a hundred coffees for every single person on the planet. But, what if this sizzling core suddenly cooled down? In the video published on Nov 2, 2018, “What If The Earth’s Core Cooled Down?” below:

We’ve managed to go hundreds of thousands of miles into space, but when it comes to the earth, we’ve barely scratched the surface. Our planet’s core is a magnificent mystery filled with secrets. It’s time to figure them out. The Earth’s inner core is an extra hot solid ball that has a radius just 30% smaller than the Moon. Scientists figured out that most of the Earth’s mass is located towards the center of our planet. The temperature of the inner core is about 9800°F. While the melting point of pure iron is about 2,800°F, at the core, its melting point is around 11,000° F, in the video published on Jan 20, 2020, “Why the Earth’s Core Is Hotter Than the Sun“, below:

What’s the most exotic destination you’ve been to? Hawaii? Australia, Hoboken, New Jersey? Well, today I’m setting off on a journey that’s way more unusual than that – down to the Earth’s core. And I’m inviting you to join me. It’ll be fun! The center of the Earth lies about 4,000 miles below its surface, so it’s gonna be a looong trip, in the video published on Sep 2, 2019, “What Would a Journey to the Earth’s Core Be Like?” below:

The Earth has three compositional layers: the crust, the mantle and the core. At least this is what we’ve long been told by geologists. But a recent discovery suggests that our planet has one more layer. Scientists that studies earthquakes found one more layer in the Earth’s inner core. Let’s take a look at it! In the video published on Nov 19, 2021, “Scientists Discovered a Mystery Layer in Earth’s Core“, below: