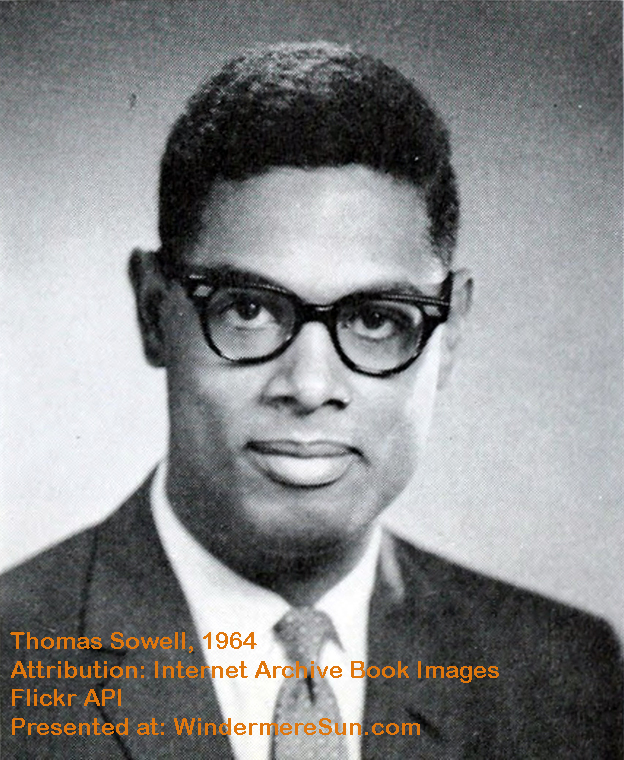 Here at Windermere Sun, we believe in presenting all points of view,  conservative (in this case, libertarian-conservative) as well as liberal.

In our evenings, we some times would like to share what each and every one in the family have learned or a book, lecture or interview we’ve come across that’s worth noting. Recently we’ve come across several interviews/talks of an American economist and author, Thomas Sowell, with much insights into how our social structure would impact family, educational level, and economy of human civilization, is definitely worth listening to. He believes that generations of slavery and Jim Crow laws did not destroy the Black families, but  welfare system destroyed the Black families.

To understand Thomas Sowell’s background, please refer to the excerpt from wikipedia, in italics, below:

Sowell has served on the faculties of several universities, including Cornell University and the University of California, Los Angeles. He has also worked at think tanks such as the Urban Institute. Since 1980, he has worked at the Hoover Institution at Stanford University, where he served as the Rose and Milton Friedman Senior Fellow on Public Policy. Sowell writes from a libertarian–conservative perspective. Sowell has written more than thirty books, and his work has been widely anthologized. He is a National Humanities Medal recipient for innovative scholarship which incorporated history, economics, and political science.

Thomas Sowell discusses economic inequality, racial inequality, and the myths that have continued to falsely describe the system of poverty among different racial and economic classes. He explains the economic theories behind these pervasive myths and proposes fact-based solutions for seemingly intractable situations. Sowell discusses his early life as a high school dropout and his first full-time job as a Western Union messenger delivering telegrams. He admits to flirting with Marxism in his early twenties as he first tried to grapple with the housing inequality he saw across the neighborhoods of New York City. Marxism, he says, was the only explanation he could find at the time. He went on to serve in the Marine Corps before continuing his education in economics at Harvard and earning a master’s at Columbia and a PhD at the University of Chicago. Sowell’s first job after his receiving his PhD in economics was working for the Department of Labor, and he says it was there that he realized Marxism was not the answer. He argues that the government has its own institutional interests in inequality that cannot be explained through Marxism. He began to be discouraged by Marxism and the government in general and began searching for better economic ideas and solutions (the free market). Robinson and Sowell discuss Sowell’s written works, his ideas of racial and economic inequality, the state of the United States today, and much more, in the video published on Dec 3, 2018, “Thomas Sowell on the Myths of Economic Inequality“, below:

Hoover Institution fellow Thomas Sowell discusses poverty around the world and in the United States. Poverty in America, he says, compared to the rest of the world, is not severe. Many poor people in poverty in the United States have one or two cars, central heating, and cell phones. The real problem for the poor is the destruction of the family, which Sowell argues dramatically increased once welfare policies were introduced in the 1960s, in the video published on Dec 8, 2015, “Wealth, Poverty, and Politics“, below:

Rich or poor, most people agree that wealth disparities exist. Thomas Sowell discusses the origins and impacts of those wealth disparities in his new book, Discrimination and Disparities in this episode of Uncommon Knowledge. Sowell explains his issues with the relatively new legal standard of “disparate impact” and how it disregards the American legal principle of “burden of proof.” Sowell and Robinson discuss how economic outcomes vary greatly across individuals and groups and that concepts like “disparate impact” fail to take into account these variations. They chat about the impact of nuclear families on the IQs of individuals, as studies have not only shown that children raised by two parents tend to have higher levels of intelligence but also that first-born and single children have even higher intelligence levels than those of younger siblings, indicating that the time and attention given by parents to their children greatly impacts the child’s future more than factors like race, environment, or genetics. Sowell talks about his book in which he wrote extensively about National Merit Scholarship finalists who more often than not were the first-born or only child in a family. Sowell and Robinson go on to discuss historical instances of discrimination and how those instances affected economic and social issues within families, including discrimination created by housing laws in the Bay Area. They discuss unemployment rates, violence, the welfare state in regards to African American communities, and more, in the video published on May 3, 2018, “Discrimination and Disparities with Thomas Sowell“, below:

Crime and criminals can pose a major threat to the stability of a society. In order to minimize crime in society, it’s important to understand why criminals commit crimes, what are the incentives under which they operate, and are criminals rational actors trying to pursue specific goals? Thomas Sowell explores these questions and explains the economics of crime and how it operates, in the video published on Dec 23, 2021, “The Fascinating Economics of Crime | Thomas Sowell“, below: