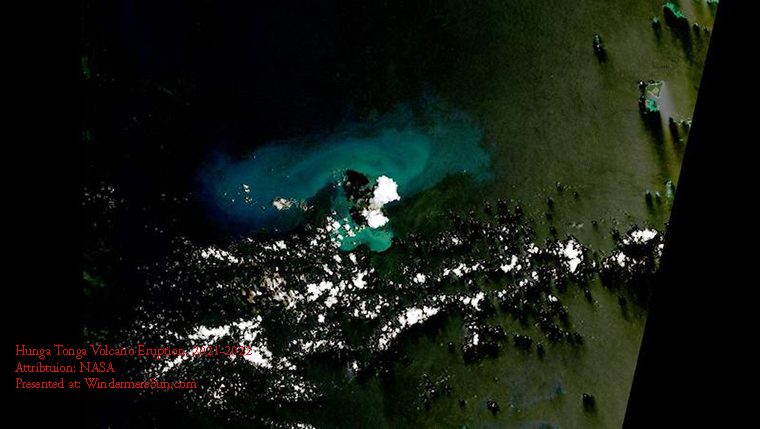 Marine tsunami warning for Tonga coastal areas, as Powerful volcanic eruption likely (January 13, 2022) Underwater volcano Hunga-Tonga-Hunga-Ha’apai has erupted again sending ash, steam and gas 20 kilometres into the air. There is a tsunami warning in place for all the islands of the Kingdom of Tonga as the volcanic activity affects coastal water levels – with people advised to stay out of the water and away from the coast. People on all islands in Tonga are advised to stay out of the water and away from the coast. The maximum tsunami wave has been recorded in Nuku’alofa tide gauge at 12:30pm and was about 30cm and the fluctuation of the sea level is currently observed. The volcano is located about 30 kilometres south-east of Fonuafo’ou island in Tonga. Tonga Geological Services head Taaniela Kula said the eruption had a radius of 260km. It was about seven times more powerful than the last eruption on December 20 last year and continuing to grow, Kula said. Kula said people on the islands of Tongatapu, Ha’apai and Vava’u needed to stay indoors as much as possible, wear a mask if they were outside and cover rainwater reservoirs and rainwater harvesting systems. Changes to seawater levels have also been detected on the south coast of Samoa as a result of this morning’s eruption, in the video published on Jan 14, 2022, “Underwater volcano Hunga Tonga – Hunga Ha’apai has erupted again sending ash 20 km. into the air!!”, below:

A powerful eruption of the Hunga Tonga-Hunga Ha’Apai volcano in Tonga on January 14th 2022. The volcano vented gases and ash up to 20 kilometers in the air. Air quality was affected, with local flights being stopped due to a lack of visibility. As ash particles filled the air, the sky turned red in some areas of Tonga, as the sun was partially obscured. Tsunami warnings have been issued following the eruption, with Tonga residents advised to stay clear of coastal areas where possible. Changes to sea levels were reported in the hours following the eruption. The volcano is situated at an island formed by a previous eruption. It is unknown at this point whether this event will destroy the island, or grow it further. The eruption is around seven times as powerful as the most recent eruption in December 2021, which caused reports of acid rain in the region. Authorities are assessing the situation as it develops, in the video published on Jan 14, 2022, “Pacific island could be destroyed as volcano erupts in Tonga January 14 2022 Hunga Tonga-Hunga“, below:

v
The eruption of the Hunga Tonga-Hunga Haʻapai volcano in between Tonga and New Zealand sent shockwaves across the South Pacific. Here is the full video of the eruption from the Tongan Navy, in the video published on Jan 14, 2022 “Tongan. Volcano Eruption (Full Video)” below:
Underwater volcano Hunga-Tonga-Hunga-Ha’apai has been erupting for a month, in the video published on Jan 14, 2022, “Tongan residents urged to stay inside after volcano eruption“, below:

The Hunga Tonga-Hunga Ha’apai volcano in Tonga just produced a second new eruption of the year, sending a plume of ash 16,800 meters or 55,000 feet into the atmosphere. This new eruption occurred alongside a surprise tsunami, which was likely generated by a volcanic edifice collapse. At the present, the Tonga coastline including Tongatapu is under a tsunami warning, as more small tsunamis may occur as the eruption continues. This video will separate fact from fiction and discuss what size and duration of volcanic activity is expected at Hunga Tonga. It is a very famous volcano as it has produced several spectacular island forming eruptions in the 21st century, in the video published on Jan 14, 2022, “Hunga Tonga Volcano Eruption Update; Tsunami Occurs; New Explosive Eruption“, below:

Dramatic footage shows waves rolling through coastal Tongan homes as a tsunami warning has been announced for the whole Pacific island nation. The Tongan Meterological Service issued the warning for all of Tonga on Saturday evening, after ongoing underwater volcanic activity, in the video published on Jan 15, 2022, “DRAMATIC FOOTAGE | Waves tsunami crashing into homes as volcano erupts in Tonga“, below:

For more information about the 2022 eruption of Hunga Tonga, please refer to the excerpt from wikipedia, in italics, below:

A large volcanic eruption occurred on 15 January 2022 of the Hunga Tonga volcano of Tonga in the Pacific Ocean. A tsunami struck Tonga, a tidal wave was recorded in Fiji, and tsunami warnings were put out in Fiji, Samoa, New Zealand, Australia and Japan.

On 20 December 2021 the volcano erupted, sending particulates into the stratosphere, and a large plume that was visible from Nukuʻalofa.[1] The Volcanic Ash Advisory Center, Wellington issued an advisory to airlines.[2] Explosions could be heard up to 170 kilometres (110 mi) away.[3] The initial eruption continued until 2am on 21 December.[1] Activity continued, and on 25 December, satellite imagery showed that the island had increased in size.[4] As activity on the island decreased, it was declared dormant on 11 January 2022.[5]

A large eruption began on 14 January on the Hunga Tonga volcano, sending clouds of ash 20 kilometres (12 mi) into the sky.[6] The government of Tonga issued a tsunami warning later, but it was lifted.[7] Tongan geologists near the volcano observed explosions and a 5 kilometres (3.1 mi) wide ash column.[8]

The following day, a significantly larger eruption occurred at approximately 5:00pm (04:00 UTC). The Volcanic Ash Advisory Center Wellington issued an advisory to airlines.[9] Ash from the eruption made landfall on the main island of Tonga, covering the sun and turning the day into night. Loud explosions were heard in Nukuʻalofa, and small stones and ash fell from the sky.[10] Many residents in Tonga were stuck in traffic after while fleeing to higher grounds.[11] The shockwave from the eruption was heard as far away as Fiji, Samoa and New Zealand.[12][13]

As a result of the eruption on 15 January, a magnitude 4.0 earthquake,[14] and a 1.2 metres (3.9 ft) tsunami,[15] struck the Tongan capital Nukuʻalofa.[5][16] Meanwhile tide gauges in Nuku’alofa showed that the waves were 1.5–2 meters in height.[17] Videos posted on social media showed a series of waves hitting the shore and homes, sweeping away debris.[18] Other videos show ash fall and a cloud of ash covering the sun.[5]

According to a resident in the Tongan capital, a series of explosions were heard at first. It was accompanied by a tsunami approximately 15 minutes later. The first wave was said to be the largest. A long white wave was seen out in the sea before approaching the coast. Three waves reportedly struck the coast.[19]

In Fiji, a tidal gauge in Suva recorded a wave measuring 20 centimeters at 5:40 pm local time. Some tsunami activity was also reported in the Lau Islands.[17]

Another warning was issued to the whole of Tonga on the evening of 15 January following another large eruption.[20] Warning sirens blared in Nukuʻalofa while authorities urge residents to flee to higher ground.[21]

The Mineral Resources Department in Fiji issued advisories to people living around the coastal areas to stay away from the shores[22]. Evacuations were made on the Lau Islands after wave activity was observed in the sea.[17] Attorney General Aiyaz Sayed-Khaiyum urged the public to stay indoors and cover household water tanks in the event of rain due to the risk of sulfuric acid generated from the eruption.[23]

Tsunami warnings were also issued to American Samoa by the Pacific Tsunami Warning Center (PTWC).[24][25] The PTWC considered the tsunami “hazardous” and warned that changes in sea level, as well as strong currents could pose a risk along the coast.[26]. Samoa later issued a tsunami advisory[27].

The National Emergency Management Agency of New Zealand told residents to expect “strong and unusual currents and unpredictable surges” along the north and east coast of North Island and the Chatham Islands[28]. The agency added that the currents have the potential to injure and drown people. [29]