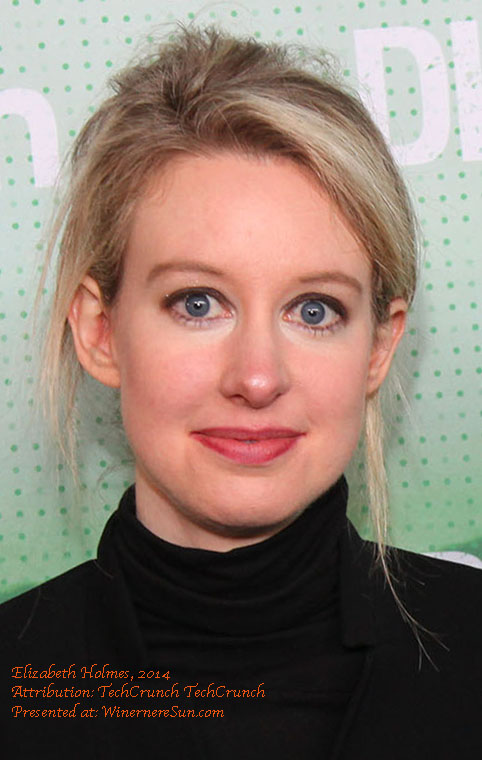 Holmes could now face up to 20 years in prison for each count of fraud. She pleaded not guilty and is expected to appeal.

Jurors in the Elizabeth Holmes fraud trial were told to work through an impasse in their deliberations after telling a judge they were struggling to reach a consensus on three of the 11 charges against the Theranos Inc. founder. A unanimous verdict is required for a conviction or acquittal on each count. Emily Chang reports, in the video published on Jan 3, 2022, “Elizabeth Holmes Jury Stuck on Three Charges, Sends Note to Judge“, below:

Elizabeth Holmes has been found guilty on four counts of wire fraud. In 2018, Norah O’Donnell reported on Theranos, the company led by Holmes with a blood-testing machine that could never perform as touted that went from a billion-dollar baby to a complete bust. “60 Minutes” is the most successful television broadcast in history. Offering hard-hitting investigative reports, interviews, feature segments and profiles of people in the news, the broadcast began in 1968 and is still a hit, over 50 seasons later, regularly making Nielsen’s Top 10, in the video published on Jan 3, 2022, “Elizabeth Holmes & TheTheranos Deception | 60 Minutes Archive“, below:

Theranos founder Elizabeth Holmes, the one-time billionaire and darling of Silicon Valley who promised a revolutionary blood-testing technology, has been found guilty of four charges in her criminal fraud trial. The jury of eight men and four women were handed the case in mid-December after three months of proceedings and testimony from 32 witnesses. Deliberations lasted more than 50 hours over seven days. In the end, the jurors convicted Holmes of one count of conspiracy to commit wire fraud and three counts of wire fraud against specific investors. U.S. District Court Judge Edward Davila will sentence Holmes at a later date. She faces up to 20 years in prison. Holmes was found not guilty on four charges and the jury determined there was no verdict on the other three. Jurors told Davila earlier on Monday that they were deadlocked on three of the 11 charges. Davila later declared a mistrial on those three counts and scheduled a status meeting for next Monday. Once heralded as the next Steve Jobs, Holmes raised $945 million from high-profile investors including the family of Betsy DeVos, Rupert Murdoch and the Walmart-founding Walton family. Theranos, at its peak, was valued at $9 billion. Holmes was ultimately convicted of defrauding PFM Healthcare Master Fund, a San-Francisco based health-care hedge fund, out of over $38 million; Lakeshore Capital Management, a fund connected to the DeVos family, of almost $100 million; and Mosley Family Holdings, an LLC associated with former estate attorney Daniel Mosley, of close to $6 million. As the jury handed was handing down its decisions, Holmes appeared stoic, showing little emotion and looking straight ahead. After the verdict was read, she went over to her family and embraced them. Holmes exited the courthouse at around 5:25 p.m. PT, without taking questions from reporters. Her attorneys also left without providing a comment. Since its start on Sept.8, the Holmes trial attracted worldwide media attention. In the final weeks of proceedings, journalists and spectators began lining up at 2 a.m. to obtain one of the 34 tickets for the main courtroom or 45 tickets for the overflow room. Jurors heard impassioned pleas in closing arguments from the government and Holmes’ defense. Assistant U.S. Attorney Jeffrey Schenk told the jury that Holmes “chose fraud over business failure. She chose to be dishonest with her investors and patients. That choice was not only callous, it was criminal.” Schenk reminded the jury that Holmes’ own employees repeatedly told her the technology simply didn’t work, yet she kept raising money on false claims. Prosecutors also tried to convince the jury to disregard Holmes’ claims that her top executive and then-boyfriend Ramesh “Sunny” Balwani abused her. Blaming Balwani was central to Holmes’ defense strategy. However, thousands of private text messages between Holmes and Balwani, obtained by CNBC, undercut some of Holmes’ claims. The messages, which span from June 2011 to July 2016, revealed romantic musings between the two. They showed a high-flying lifestyle while their start-up was bleeding hundreds of millions of dollars. ‘Down with the ship’ “You do not need to decide whether that abuse happened to reach your verdict,” Schenk said. “The case is about false statements made to investors, false statements made to patients.” In his closing argument, Kevin Downey, an attorney for Holmes, told the jury that his client acted in good faith and “believed that she built a technology that could change the world.” in the video published on January 3, 2021, “Mixed verdict trial of Elizabeth Holmes“, below:

Theranos founder Elizabeth Holmes was convicted of four federal fraud charges Monday and acquitted on four others while a jury deadlocked on the three remaining charges after months of trial. NBC News’ Ben Popken breaks down the verdict, in the video published on Jan 3, 2021, “BREAKING: Elizabeth Holmes Found Guilty On Four Counts of Fraud“, below:

The Theranos fraud trial continues Monday as jury deliberates on the charges Elizabeth Holmes faces. She’s been found guilty on some of the charges but more decisions have yet to be made. Scott Budman reports from San Jose and NBC Bay Area legal analyst Paula Canny explains, in the video published on Jan 3, 2021, “Theranos Trial: Holmes Found Guilty of 4 Counts“, below:

In a case that exposed Silicon Valley’s culture of hubris and hype, Elizabeth Holmes was convicted Monday of duping investors into believing her startup Theranos had developed a revolutionary medical device that could detect a multitude of diseases and conditions from a few drops of blood, in the video published on Jan 4, 2022, “Elizabeth Holmes silent while leaving courthouse after guilty verdict“, below:

Theranos founder Elizabeth Holmes has been convicted of four counts of fraud, but was acquitted on four other charges. The jury deadlocked on the remaining three counts. Anna Werner has the latest, in the video published on Jan 3, 2021, “Jury reaches partial guilty verdict in Elizabeth Holmes trial“, below: