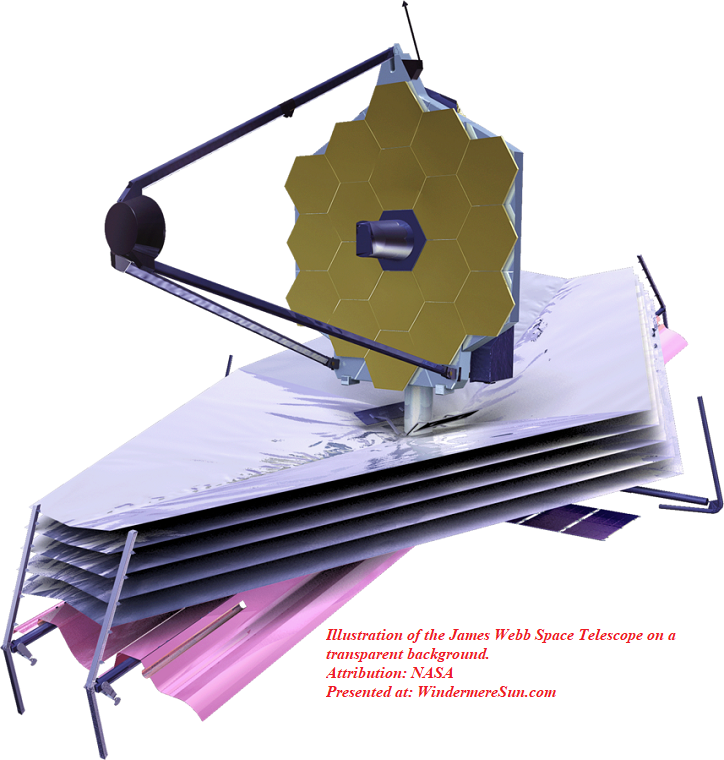 Illustration of the James Webb Space Telescope on a transparent background. (Attribution: NASA, Presented at: WindermereSun.com)

The James Webb Space Telescope, NASA’s premier space observatory of the next decade, successfully launched from French Guiana. Webb will peer into the very atmospheres of exoplanets, some of which are potentially habitable, and it could uncover clues in the ongoing search for life outside of Earth, in the video published on Dec 25, 2021, “Watch NASA’s James Webb Space Telescope launch into orbit“, below:

The BBC’s science editor Rebecca Morelle on how the observatory hopes to capture the history of our Universe, in the video published on Dec 25, 2021, “James Webb Space Telescope: How will it work? – BBC News“, below:

On Saturday, December 25, 2021, the world’s largest and most powerful telescope blasted into space. The James Webb telescope’s mission is to study the early days of the universe and allow us to see the unimaginable, in the video published on Dec 25, 2021, “James Webb Telescope Launches Into Space“, below:

The most powerful space telescope ever built has officially left Earth. NASA’s James Webb Space Telescope blasted off on December 25 at 7:20 a.m. Eastern from a European spaceport in French Guiana, in the video published on Dec 25, 2021, “NASA Release Video Of $10 Billion James Webb Telescope In Space“, below:

More on the James Webb Space Telescope (JWST), in the excerpt from wikipedia, below, in italics:

The James Webb Space Telescope (JWST) is a space telescope developed by NASA with contributions from the European Space Agency (ESA), and the Canadian Space Agency (CSA). The telescope is named after James E. Webb,[7] who was the administrator of NASA from 1961 to 1968 and played an integral role in the Apollo program.[8][9] It is intended to succeed the Hubble Space Telescope as NASA’s flagship mission in astrophysics.[10][11] JWST was launched on 25 December 2021 on Ariane flight VA256. It is designed to provide improved infrared resolution and sensitivity over Hubble, and will enable a broad range of investigations across the fields of astronomy and cosmology, including observations of some of the most distant events and objects in the Universe such as the formation of the first galaxies, and allowing detailed atmospheric characterization of potentially habitable exoplanets.

The primary mirror of JWST, the Optical Telescope Element, consists of 18 hexagonal mirror segments made of gold-plated beryllium, which combine to create a 6.5 m (21 ft)-diameter mirror – considerably larger than Hubble’s 2.4 m (7 ft 10 in) mirror. Unlike the Hubble telescope, which observes in the near ultraviolet, visible, and near infrared (0.1–1.0 μm) spectra, JWST will do so in a lower frequency range, from long-wavelength visible light (red) through mid-infrared (0.6–28.3 μm). This will enable it to observe high-redshift objects that are too old and too distant for Hubble.[12][13] The telescope must be kept very cold to observe in the infrared without interference, so it will be deployed in space near the Sun–Earth L2 Lagrange point, about 1.5 million kilometres (930,000 mi) from Earth (0.01 au – 3.9 times the distance to the Moon).[14] A large sunshield made of silicon– and aluminum-coated Kapton will keep its mirror and instruments below 50 K (−223 °C; −370 °F).[15]

Development began in 1996 for a launch that was initially planned for 2007 with a US$500 million budget.[18] There were numerous delays and cost overruns, including a major redesign in 2005,[19] a ripped sunshield during a practice deployment, a recommendation from an independent review board, the COVID-19 pandemic,[20][21][22] issues with the Ariane 5 rocket[23] and the telescope itself, and communications issues between the telescope and the launch vehicle.[24] Concerns among the involved scientists and engineers about the launch and deployment of the telescope have been well-described.[25][26]

Construction was completed in late 2016, at which point an extensive testing phase began.[27][28] JWST was launched at 12:20 UTC on 25 December 2021 by an Ariane 5 launch vehicle from Kourou, French Guiana, on the northeastern coast of South America, and was released from the upper stage 27 minutes later.[29] The telescope was confirmed to be receiving power, and as of December 2021 is traveling to its target destination.[30][31][32]