An Extraordinary Life Time Of Service, A Much Needed Consensus Builder, May Bob Dole Rest In Peace 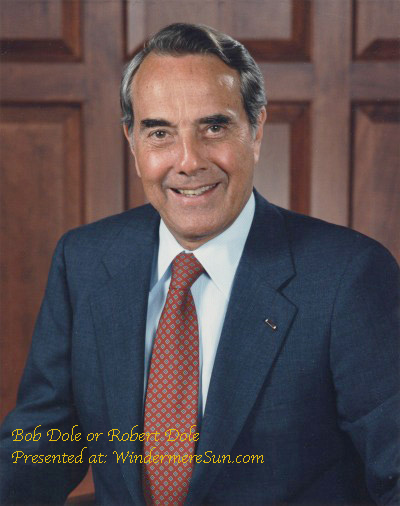 Bob Dole, the World War II veteran, Senate leader and GOP presidential candidate, was honored Thursday, December 9, 2021, at the U.S. Capitol, where his body will lie in state. Major Garrett anchors a CBS News Special Report, joined by Kris Van Cleave and Nancy Cordes, in the video published on December 9, 2021, “Bob Dole honored in ceremony at U.S. Capitol“, below:

Bob Dole’s passing comes 77 years after he was shot and temporarily paralyzed as a 21-year-old army lieutenant in World War II. He went on to spend decades in the public eye. Dole, who was the personification of what Tom Brokaw called “the greatest generation,” is remembered this week as the nation says goodbye to the Kansas politician – and to the end of an era in American politics. NBC’s Andrea Mitchell reports in this week’s Sunday Focus, in the video published on Dec 12, 2021, “Inside The Life And Legacy Of Sen. Bob Dole“, below:

Senator Bob Dole, a wounded World War II veteran who became a Congressman, Senator and Republican presidential nominee, died Sunday, December 5 at the age of 98. “Sunday Morning” correspondent Rita Braver looks back at the life of a son of Kansas dedicated to his country; and talks with former Democratic Senator Tom Daschle about his colleague from across the aisle, in the video published on Dec 5, 2021, “Remembering Senator Bob Dole“, below:

The Bipartisan Policy Center (BPC) looks back at the extraordinary career of BPC co-founder former Senate Majority Leader Bob Dole, in the video published on Oct 27, 2014, ““A Century of Service” Short Film: Bob Dole“, below:

Since leaving public elective office, former Presidential candidate and Senator Bob Dole continues to take an active leadership role in a wide range of public policy and charitable causes. Recent projects include serving as Chairman of the National World War II Memorial, which was completed and dedicated in 2004; serving as Chairman of the International Commission on Missing Persons, and co-chairing, with Former President Bill Clinton, a foundation to assist the spouses and children of the victims of the 9/11 terrorist attack; and serving as President of the Federal City Council. He also takes an active role in supporting the work of the Robert J. Dole Institute of Politics at his alma mater, Kansas University. As a renowned political commentator, a frequent guest on late night talk shows, star of two Super Bowl commercials and best selling author, Bob Dole is part of the American landscape. Senator Dole’s best-selling World War II memoir, One Soldier’s Story, chronicles his harrowing experience on and off the battlefield and the lessons learned through his struggle to survive. One Soldier’s Story is a tribute to those who defended liberty in its darkest hour and his gift to future generations, a destined-to-be classic about overcoming adversity and making the most out of life, in the video published on Feb 2, 2014, “Bob Dole on Political Wit“, below:

To learn more about Robert Dole (aka Bob Dole), please refer to the excerpt from wikipedia, in italics, below:

Robert Joseph Dole (July 22, 1923 – December 5, 2021) was an American politician and attorney who represented Kansas in the United States Senate from 1969 to 1996. He was the Republican Leader of the Senate during the final 11 years of his tenure, including three nonconsecutive years as Senate Majority Leader. Prior to his 27 years in the Senate, he served in the United States House of Representatives from 1961 to 1969. Dole was also the Republican presidential nominee in the 1996 election and the vice presidential nominee in the 1976 election.

Dole was born and raised in Russell, Kansas, where he established a legal career after serving with distinction in the United States Army during World War II. Following a stint as Russell County Attorney, he won election to the House of Representatives in 1960. In 1968, Dole was elected to the Senate, where he served as chairman of the Republican National Committee from 1971 to 1973 and chairman of the Senate Finance Committee from 1981 to 1985. He led the Senate Republicans from 1985 to his resignation in 1996, and served as Senate Majority Leader from 1985 to 1987 and from 1995 to 1996. In his role as Republican leader, he helped defeat Democratic President Bill Clinton‘s health care plan.

President Gerald Ford chose Dole as his running mate in the 1976 election after Vice President Nelson Rockefeller withdrew from seeking a full term. Ford was defeated by Democrat Jimmy Carter in the general election. Dole sought the Republican presidential nomination in 1980, but quickly dropped out of the race. He experienced more success in the 1988 Republican primaries but was defeated by Vice President George H. W. Bush. Dole won the Republican presidential nomination in 1996 and selected Jack Kemp as his running mate. The Republican ticket lost in the general election to Clinton, making Dole the first unsuccessful major party nominee for both president and vice president. He resigned from the Senate during the 1996 campaign and did not seek public office again after the election.

Dole remained active after retiring from public office. He appeared in numerous commercials and television programs and served on various councils. In 2012, Dole unsuccessfully advocated Senate ratification of the Convention on the Rights of Persons with Disabilities. He initially supported Jeb Bush in the 2016 Republican primaries, but later became the only former Republican presidential nominee to endorse Donald Trump in the general election. Dole was a member of the advisory council of the Victims of Communism Memorial Foundation and special counsel at the Washington, D.C., office of law firm Alston & Bird.[3] Dole was awarded the Congressional Gold Medal on January 17, 2018. He was married to former U.S. Senator Elizabeth Dole of North Carolina.