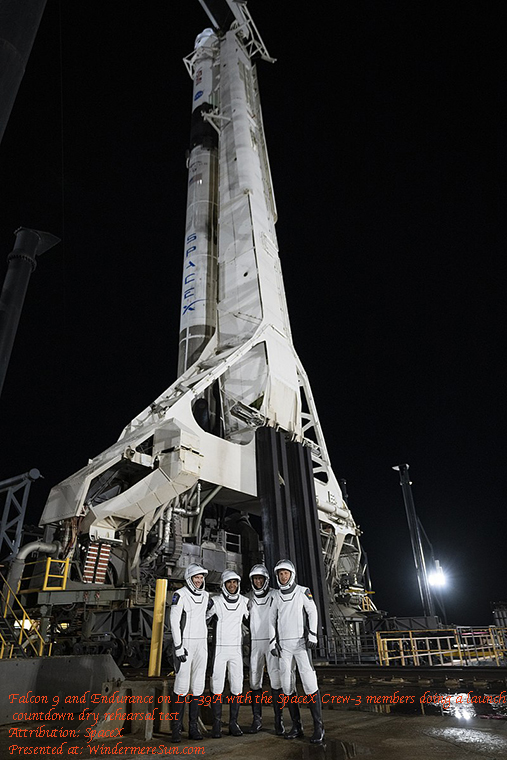 NASA’s SpaceX Crew-3 astronauts participate in a countdown dress rehearsal at the agency’s Kennedy Space Center in Florida on Oct. 28, 2021, to prepare for the upcoming Crew-3 launch. The astronauts are at Launch Pad 39A with the Falcon 9 and Crew Dragon behind them during the rehearsal. From left are NASA astronauts Kayla Barron, Raja Chari, Crew-3 commander, and Tom Marshburn, and European Space Agency astronaut Matthias Maurer. The four-person crew will launch aboard the Crew Dragon atop the Falcon 9 on Oct. 31 to the International Space Station. Launch is targeted for 2:21 a.m. EDT from Pad 39A. Crew-3 is the third crew rotation flight to the space station for NASA’s Commercial Crew Program, and the first flight of a new Crew Dragon spacecraft. (Attribution: SpaceX, Presented at: WindermereSun.com)

We have lift-off! SpaceX Crew 3 launches to the International Space Station inside a Dragon capsule, named Endurance on top of a Falcon 9 rocket, in the video published on Wednesday, Nov 10, 2021, “SpaceX Crew 3 Rocket Launches! (Watch it here)“, below:

For SpaceX Crew-3, excerpt from wikipedia, in italics, below:

SpaceX Crew-3 is the third operational NASA Commercial Crew flight of a Crew Dragon spacecraft, and the fourth crewed flight for the commercial programme of the NASA. The mission successfully launched on 11 November 2021 at 02:03:31 UTC.[3][1] At a NASA briefing held on 2 May 2021, Steve Stich, program manager of NASA’s Commercial Crew Program, said Crew-3 will use a new Crew Dragon which was later named Endurance. As such, it is the first time rookie astronauts are flying on a new Crew Dragon. This launch has also brought the total number of humans ever been to space to more than 600.[4]

Crew Dragon capsules so far have been given names by their initial crews — Endeavour for the first, and Resilience for the second. On 7 October 2021, it was announced that the third capsule will be called Endurance.[5] Astronaut Chari said that the name honors the SpaceX and NASA teams that built the spacecraft and trained the astronauts who will fly it. Those workers endured through a pandemic. The name also honors the ship used by Shackleton’s Imperial Trans-Antarctic Expedition. The three-masted vessel sank in 1915 after being bound in ice before reaching Antarctica.[6]

The European segment of the mission is called “Cosmic Kiss”.[25]

On Wednesday, November 10 at 9:03 p.m. EST, 2:03 UTC on November 11, SpaceX and NASA launched Dragon’s third long-duration operational crew mission (Crew-3) to the International Space Station from historic Launch Complex 39A (LC-39A) at NASA’s Kennedy Space Center in Florida. Following stage separation, Falcon 9’s first stage landed on the “A Shortfall of Gravitas” droneship. On Thursday, November 11 at approximately 7:10 p.m. EST, 00:10 UTC on November 12, Dragon will autonomously dock with the space station. Follow Dragon and the Crew-3 astronauts during their flight to the International Space Station at spacex.com/launches, in the video published on Nov 10, 2021, “Crew-3 Mission | Coast“, below:

Watch live coverage as SpaceX and NASA launch four astronauts of the Crew-3 mission to the International Space Station. Launch is scheduled for 9:03 pm ET, in the video streamed on Nov 10, 2021, “LIVE: SpaceX launches Crew-3 mission to ISS | NBC News“, below:

SpaceX Crew 3 wave goodbye to family and friends and take a ride in Teslas to the launch pad, as they get ready to take a trip to the International Space Station, in the video published on Nov 10, 2021, “SpaceX Crew 3 ride Teslas to launch pad“, below: