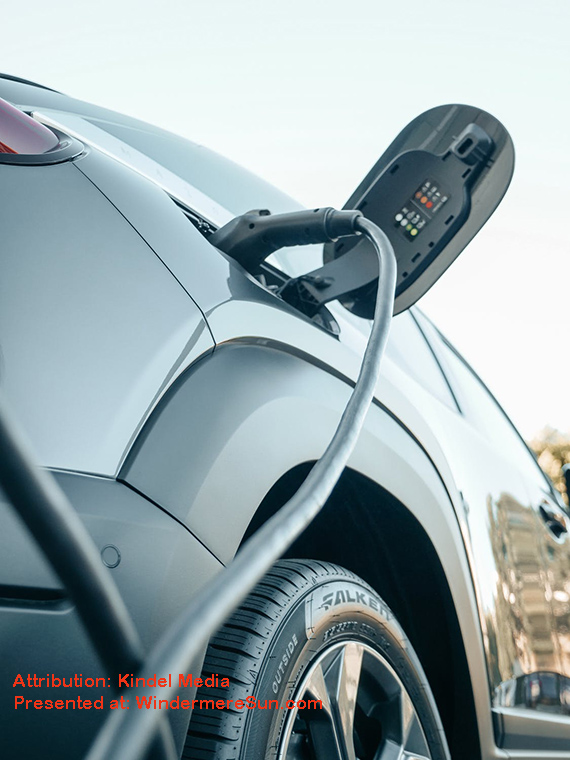 Ford’s commitment to sustainability is just getting started. Join Ford live in celebrating BlueOvalSK Battery Park, the newly announced twin battery plants in Kentucky that will power a new lineup of Ford and Lincoln electric vehicles. This is the next phase in leading the electric revolution, in the video published on Sep. 28, 2021, “BlueOvalSK Battery Park | Leading the Electric Revolution | Ford“, below:

The BlueOvalSk Battery Park in Glendale is set to open in 2025 and will provide lithium-ion batteries to the next generation of Ford’s electric vehicles, in the video published on Sep 27, 2021, “Hardin County to become home to Ford’s electric battery plants“, below:
General Motors announced Tuesday it is building an all-new battery facility on the campus of the Global Tech Center in Warren, in the video published on Oct 5, 2021, “GM building all-new EV battery facility at Tech Center in Warren“, below:

It’s no secret that right now an electric car race is unfolding between major automakers. The newcomer Tesla turned the industry around and forced other companies to throw all their energy into the development of the electric direction. And while the automotive giants, along with promising startups, are trying to keep up with Elon Musk, an even bigger battle is taking place behind the scenes – the battery battle, in the video published on May 22, 2021, “Why LG and GM are building a giant battery plant for $2.3 billion“, below:

San Francisco-based Ample has brought electric vehicle battery swapping to the U.S. The company was in stealth mode for seven years before launching recently with five swapping stations in the Bay Area. Uber drivers in the area are Ample’s first customers. The concept isn’t new. A start-up called Better Place launched an EV and battery swapping company after it raised $850 million in venture funding, but it ultimately went bankrupt in 2013. Tesla also demoed battery swapping in 2013 but only opened one station for about a year. Elon Musk said Tesla owners were not interested in it. Battery swapping is already common in China. Electric vehicle maker Nio, for example, plans to double its network of swapping stations to 500 this year and plans to open stations in Norway as part of its expansion into Europe. Ample has a different approach, with modular batteries and a focus on fleets. CNBC got an inside look at its headquarters and battery factory in San Francisco to learn how the company plans to bring battery swapping into the mainstream, in the video published on May 29, 2021, “Can EV Battery Swapping Take Off In The U.S.?” below:

Toyota Charges into Electrified Future in the U.S. with 10-year, $3.4 billion Investment, in the video published on Oct. 18, 2021, “Toyota’s NEW Battery Plant will make Electric Vehicles CHEAPER for America…“, below:

Toyota is facing off against Tesla in the electric vehicle market. However Toyota has no EVs for sale today and only plans to bring a BEV to market by next year. This gives Elon Musk a huge runway for crushing Toyota’s hybrid and hydrogen powered vehicles. Elon Musk wants the Tesla Model Y to be the best selling car in the world, meaning it will need to surpass the Toyota Corolla for the dominant position. Will Toyota survive the wave of EVs from Tesla, and even so, will they be able to maintain the 10 million vehicle volume that Toyota is able to sell each year, or will Tesla take their place as the best manufacturer in the world? In the video published on Sep 26, 2021, “GAME OVER. Toy0ta Can’t Catch Up to Tesla“, below:

South Korean battery maker Samsung SDI could soon be entering the U.S. Reports say it’s signed an MOU with one of the world’s largest carmakers, Stellantis,… which owns more than a dozen well-known brands. If so, SDI will join other South Korean battery makers in North America, SK On and LG Energy Solution. Seo Eunkyung reports. South Korean battery maker Samsung SDI and global car maker Stellantis have reportedly signed a deal to jointly produce electric vehicle batteries for the North American market. Reuters reported on Tuesday that Samsung SDI had signed an MOU with the carmaker, which owns the Jeep, Dodge and Chrysler brands among others, and the location of the battery joint venture is under review. The news came a day after Stellantis made a similar deal with LG Energy Solution. Samsung SDI, an affiliate of Samsung Electronics, currently operates three electric vehicle battery plants worldwide… in South Korea, China and Hungary….and now the company is expanding to North America. Citing industry sources, South Korea’s Yonhap news agency reported the two companies plan to build a factory in the United States. “The American market is one of the largest and important electric vehicle markets along with Europe and China. And… President Biden publicly mentioned the importance of it. Among Korean EV battery makers, LG Energy Solution and SK On already have battery factories in the U.S., but not Samsung SDI. This MOU is meaningful in a sense that it can now secure all three major strategic bases in terms of electric vehicle batteries.” No details on the total capacity of the joint venture have been disclosed yet… but industry watchers expect the plant to produce 10 gigawatt hours of batteries each year, enough for roughly 140-thousand Hyundai IONIQ5 cars. As more companies are jumping into the North American battery market… the expert added that it is getting important for Korean firms to keep their own competitive edge over their global rivals. Seo Eunkyung, Arirang News, in the video published on Oct. 20, 2021, “Samsung SDI and Stellantis agree to jointly produce EV batteries for North American market“, below: