Colin Powell, Representing The Best Of What America Can Be, Passed Away Due To COVID Complications, At Age 84 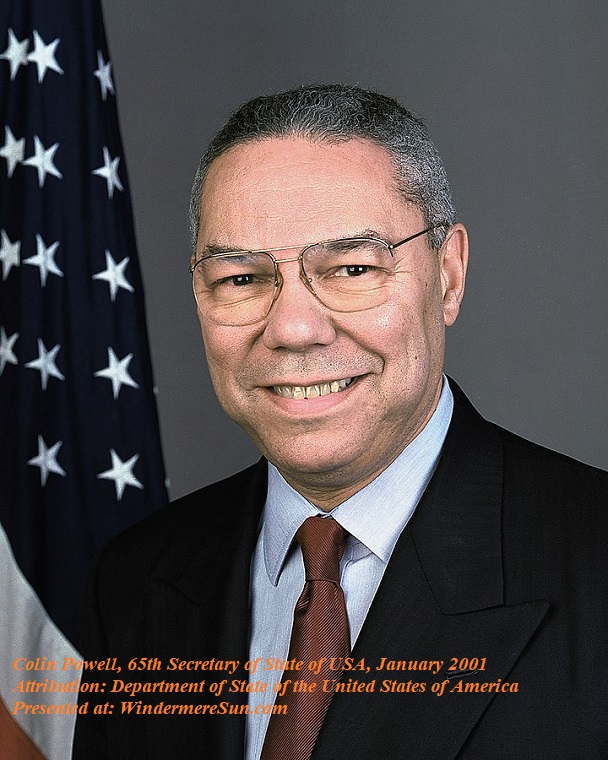 The former 65th Secretary of State, Colin Powell, has died due to complications from Covid-19 at Walter Reed National Military Medical Center. Powell was 84 and had been fully vaccinated from Covid-19, but his cancer had compromised his immune system, in the video published on Oct. 18, 2021, “Colin Powell Dies From Covid Complications At 84“, below:

Presidential historian Jon Meacham discusses the life and legacy of first Black Secretary of State Colin Powell, who died from Covid complications at the age of 84, in the video published on Oct. 18, 2021, “Meacham: Colin Powell Represents The Best Of What The Country Can Be“, below:

Colin Powell, the former US secretary of state who played a pivotal role in attempting to justify the 2003 invasion of Iraq, has died from complications from Covid-19 aged 84, it was announced on Monday. He was fully vaccinated, in the video published on Oct. 18, 2021, “Colin Powell discusses the most important element of leadership in 2011 speech“, below:

Colin Powell, the first Black US secretary of state whose leadership in several Republican administrations helped shape American foreign policy in the last years of the 20th century and the early years of the 21st, has died from complications from Covid-19, his family said on Facebook. CNN’s Wolf Blitzer looks back on his life and career, in the video published on Oct. 18, 2021, “Colin Powell dies at 84“, below:

Former Secretary of State Colin Powell died at the age of 84 Monday morning due to complications of COVID-19. He was fully vaccinated, his family said. Nancy Cordes reports from the White House and John Dickerson discusses Powell’s legacy, in the video published on Oct. 18, 2021, “Colin Powell dies at 84 due to complications from COVID-19“, below:

Colin L. Powell, who helped guide the U.S. military to victory in the 1991 Persian Gulf War as chairman of the Joint Chiefs of Staff, then struggled a decade later over the U.S. invasion of Iraq as a beleaguered secretary of state under President George W. Bush, died Oct. 18 at 84, in the video published on Oct. 18, 2021, “Colin L. Powell, history-making secretary of state and chairman of the Joint Chiefs of Staff, dies“, below:

Retired Forme NATO Supreme Allied Commander, Adm. James Stavridis, discusses Colin Powell’s record as a combat soldier, in the video published on Oct. 18, 2021, “Stavridis: Powell Bought A Soldier’s Sensibility To Every Decision He Made“, below:

Richard Haass of the Council on Foreign Relations remembers the life and legacy of Former Secretary of State Colin Powell, in the video published on Oct. 18, 2021, “Richard Haass: Colin Powell Was Grounded In Reality“, below:

More about Colin Powell, from the excerpt in wikipedia, in italics, below:

Colin Luther Powell (/ˈkoʊlɪn/;[1] April 5, 1937 – October 18, 2021) was an American politician, diplomat, statesman, and four-star general who served as the 65th United States Secretary of State from 2001 to 2005. He was the first African-American Secretary of State.[2] Prior to the election of Barack Obama as president in 2008, he and his successor, Condoleezza Rice, were the highest-ranking African Americans in the history of the federal executive branch (by virtue of the Secretary of State standing fourth in the presidential line of succession). He served as the 16th United States National Security Advisor from 1987 to 1989 and as the 12th Chairman of the Joint Chiefs of Staff from 1989 to 1993.

Powell was born in New York City in 1937 and was raised in the South Bronx. His parents, Luther and Maud Powell, immigrated to the United States from Jamaica. He was educated in the New York City public schools, graduating from the City College of New York (CCNY), where he earned a bachelor’s degree in geology. He also participated in ROTC at CCNY and received a commission as an Army second lieutenant upon graduation in June 1958. He was a professional soldier for 35 years, during which time he held many command and staff positions and rose to the rank of four-star general. He was Commander of the U.S. Army Forces Command in 1989.

Powell’s last assignment, from October 1989 to September 1993, was as the 12th chairman of the Joint Chiefs of Staff, the highest military position in the Department of Defense. During this time, he oversaw 28 crises, including the invasion of Panama in 1989 and Operation Desert Storm in the Persian Gulf War against Iraq in 1990–1991. He formulated the Powell Doctrine which limits American military action unless it satisfies criteria regarding American national security interests, overwhelming force, and widespread public support.[3] He was the 65th United States Secretary of State, serving under Republican President George W. Bush. His term was highly controversial regarding his inaccurate justification for America’s Iraq War in 2003. He was forced to resign after Bush was reelected in 2004.[4]

In 1995, Powell wrote his autobiography, My American Journey, and then in retirement another book, It Worked for Me, Lessons in Life and Leadership (2012). He pursued a career as a public speaker, addressing audiences across the country and abroad. Prior to his appointment as Secretary of State, Powell was the chairman of America’s Promise – The Alliance for Youth, a national nonprofit organization dedicated to mobilizing people from every sector of American life to build the character and competence of young people. He won numerous U.S. and foreign military awards and decorations. His civilian awards included the Presidential Medal of Freedom (twice), the Congressional Gold Medal, the Presidential Citizens Medal, the Secretary of State Distinguished Service Medal, and the Secretary of Energy Distinguished Service Medal. Several schools and other institutions were named in his honor, and he held honorary degrees from universities and colleges across the country. In 2016, while not a candidate for that year’s election, he received three electoral votes from Washington for the office of President of the United States.[5]

Powell, who was being treated for blood cancer, died on October 18, 2021, from complications of COVID-19.