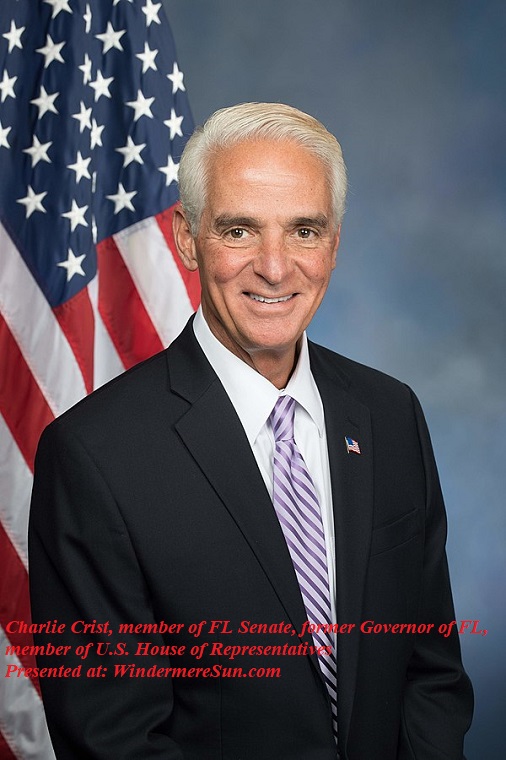 I’ve received questions from various readers, wondering if Charlie Crist will be appearing at the Orlando Pride Parade. Since I have not yet been able to receive confirmation about if/when Charlie Crist will be attending, this post will be examining various positions of the ever evolving candidate, Charlie Crist, who had served the people and government of Florida for many decades, as member of the Florida Senate, Education Commissioner of Florida, Florida Attorney General, Governor of Florida, and U.S. House of Representatives. He is currently campaigning to be the Governor of Florida in the coming gubernatorial election. You will find that Charlie Crist is not afraid to learn, to adapt to change, and to apologize, unlike most politicians.

Earlier in 2021, Charlie Crist announced his campaign for governor of Florida on 2022 in a video posted on Twitter, “Florida should be a place where hard work is rewarded, justice is equal, and opportunity is right in front of you. That’s a Florida for all – and that’s why I’m running for Governor.” and focusing on the practice of Golden Rule and Florida For All Floridians.

In the video published on May 4, 2021, “Charlie Crist announces that he’s running for Florida governor“, below:

In Play talks to party switcher and former Florida Gov. Charlie Crist who hopes that his reputation as a consensus builder and non-ideologue will help him win votes in his first race since becoming a Democrat, in the video published on Nov. 25, 2013 “Charlie Crist on why you should trust him“, below:

To learn more about the background and history of this event (Orlando Pride Parade), please refer to excerpt from wikipedia, in italics, below:

Come Out with Pride (COWP) is a 501(c)(3) nonprofit organization based in Orlando, Florida that has organized an annual pride event of the same name since 2005.[1] The group was cited as an example of the community activities centered at the Pulse nightclub following a terrorist attack on that location.[2]

The Metropolitan Business Association or Central Florida LGBT Chamber of Commerce sponsored the first pride parade in Orlando in 2005.[3] In 2018, 175,000 people attended the parade, making it one of the largest pride events in Florida.[4]

The Come Out with Pride schedule spans a week of varied activities for attendees.[5] The parade takes place in Lake Eola Park, located in Downtown Orlando.[6]

Recently, Come Out With Pride raised money via an online show. Come Out with Pride’s Jeff Prystajko, who organized the fundraiser, says half of the money will go toward LGBTQ charities. The other half will go to LGBTQ people in Central Florida.[7]

In the video published on May 4, 2021, “Congressman Charlie Crist announces run for governor of Florida“, below:

The Democratic congressman discusses COVID-19 restrictions, vaccine passports and his run for governor against Ron DeSantis, in the video published on May 14, 2021, “Florida Rep. Charlie Crist talks new gubernatorial run“, below:

To learn more about who Charlie Crist is, please refer to the exerpt from wikipedia, in italics, below:

Charles Joseph Crist Jr. (/krɪst/; born July 24, 1956) is an American lawyer and politician who has served as the U.S. Representative from Florida’s 13th congressional district since 2017. The district is based in St. Petersburg. He served as the 44th governor of Florida from 2007 to 2011.

Crist began his political career as a Republican, serving in the Florida Senate from 1993 to 1999, running unsuccessfully against incumbent Bob Graham for the U.S. Senate in 1998 and then serving as Florida Education Commissioner from 2001 to 2003 and Florida Attorney General from 2003 to 2007, before being elected governor in 2006.

After initially leading in the 2010 Senate race for the Republican nomination, Crist was overtaken in the polls by Marco Rubio when the state GOP committee decided not to fund his reelection bid, and in April 2010, Crist left the Republican Party to run as an independent.[1] In the general election, he lost to Rubio in a three-way race, taking 30% of the vote to Rubio’s 49% and Democratic nominee Kendrick Meek‘s 20%. Crist’s term as governor ended in January 2011.

On December 7, 2012, Crist joined the Democratic Party, having endorsed President Barack Obama for reelection in 2012.[2] On November 1, 2013, he announced that he was running for governor in the 2014 election.[3] He was defeated by Governor Rick Scott, Crist’s successor, by a 1% margin.[4][5] In 2016, Crist was elected to Congress from his home district, the 13th, defeating incumbent Republican David Jolly, 52%–48%[6] and became the first Democrat to represent this district since 1955. As of the 117th Congress, Crist is the only former governor serving in the House.

Crist is a candidate for the Democratic Party‘s nomination in the 2022 Florida gubernatorial election.[7]

Crist supported President Obama‘s American Recovery and Reinvestment Act of 2009, a stimulus package in response to the Great Recession.[23][24][25] Fellow Republicans were angered by Crist’s support for the stimulus.[26]

In 2008, Crist signed a provision preventing employers from prohibiting employees from bringing firearms to the workplace, as long as the weapons are secure and the employees have a concealed carry license.[29][30]

In 2010, while running for the U.S. Senate again, Crist said he would “fight for pro-life legislative efforts” and described himself as “pro-life”.[32] By March 2010, however, as rumors swirled that he would leave the Republican Party and become an independent, Crist reiterated that he did not support overturning Roe v. Wade and told a Christian Family Coalition group, “We ought to, instead of change laws, change hearts.”[33]

In June 2010, after leaving the Republican Party and becoming an independent, Crist removed anti-abortion language from his website.[34] Shortly thereafter, he vetoed a bill to require women seeking abortions to pay for and receive an ultrasound, calling the measure “punitive” and “almost mean-spirited”.[32][34] The bill also included language barring abortion coverage “under a contract toward which any tax credit or cost-sharing credit is applied.”[35] Legislative Republicans and anti-abortion groups said his language was aimed at preventing “what they considered the possibility of federal funding being used for abortion in Florida”,[34][35] while abortion rights groups said the broadly written provision would have resulted “in hundreds of thousands of women losing health care coverage that they currently have.”[35] The bill Crist vetoed also included some provisions “intended to thwart” the Affordable Care Act, the federal health care reform legislation championed by President Obama.[34]

In 2006, as a proposed state constitutional amendment banning same-sex unions was headed to the ballot in Florida, Crist said that such an amendment was unnecessary because state law already barred same-sex marriages.[36] But in September 2005, Crist had signed a petition for the amendment during the Republican primary at the Christian Coalition‘s request.[36][37] Crist said in campaign materials at the time that he supported “traditional marriage”.[36] In 2008, Crist said he voted for the amendment, which passed.[36]

In a debate and a radio talk show appearance in 2006, Crist indicated support for civil unions.[37] In 2010, after becoming an independent during the U.S. Senate race, he declared his support for civil unions encompassing “the full range of legal protections” including “access to a loved one in the hospital, inheritance rights, the fundamental things people need to take care of their families.”[37] It is unclear whether the 2008 state constitutional amendment Crist supported would have prohibited such civil unions.[37]

As governor Crist deemphasized the marriage issue, saying in a late 2007 CNN appearance, “It’s not an issue that moves me. I’m just a live and let live kind of guy”, and telling the Orlando Sentinel in 2008 that the issue was not “top-tier” for him.[36][37]

Crist initially supported Florida’s ban on same-sex adoption, which had been in place since 1977.[38] He publicly expressed support for the ban from the time he was attorney general in 2006 to his campaign for the U.S. Senate in 2010, even after some state legislators proposed dropping the ban in 2007. In 2008, in the case of In re Gill, a Miami-Dade judge struck down the ban as unconstitutional.[38] As the case proceeded through appeals, Crist expressed support for the ban as late as February 2010,[38] but by June 2010, expressed openness to changing Florida law to allow same-sex adoption, saying a better approach “would be to let judges make that decision on a case-by-case basis.”[38][39]

In September 2010, Crist said that he had had an “appropriate evolution” on gay rights and was considering dropping the state’s appeal of the court ruling striking down Florida’s ban on gay adoption.[40] Days later, after an appeals court struck down the ban, Crist hailed the ruling “a very good day for Florida” and “a great day for children” and announced that the state would no longer seek to enforce the ban.[38] In a Senate candidates’ debate the next month, he attributed his shift in positions to “the convergence of life experience and wisdom”, saying that he had become more tolerant and become less judgmental with age.[38]

In January 2014, Crist apologized for his support for the 2008 same-sex marriage ban and for the same-sex adoption ban, telling an Orlando LGBT publication, “I’m sorry I did that. It was a mistake. I was wrong. Please forgive me.”[41][42][43]

In June 2008 Crist proposed that Florida buy 187,000 acres (76,000 ha) from the United States Sugar Corporation for $1.2 billion. The purchase would remove about 187,000 acres of sugar farming for restoration efforts. In front of supporters in Palm Beach County, Crist called the deal “as monumental as our nation’s first national park.”[44] Economic changes forced the purchase to be reduced to 73,000 acres (30,000 ha) of sugar and citrus plantations for Everglades restoration projects.[45][46][47][48]

Crist announced plans to sign executive orders to impose strict air pollution standards in Florida, with an aim to reduce greenhouse gas emissions by 80% of 1990 levels by 2050.[49] In his gubernatorial campaign Crist opposed offshore oil drilling. He altered that position in June 2008, when oil reached peak prices, saying, “I mean, let’s face it, the price of gas has gone through the roof, and Florida families are suffering, and my heart bleeds for them.”[50]

In April 2010, Crist vetoed an education bill that would have linked teacher pay to test scores, a piece of legislation conservatives strongly supported.[52]

Crist supported increased regulation of the insurance industry, including property insurance rates (in the aftermath of Hurricane Katrina) and health insurance. The Citizen’s Property Insurance Corp and the Florida Hurricane Catastrophe Fund had been described as risky and underfunded. Standing next to former football star Dan Marino (whose son, Michael, is autistic and inspired the Dan Marino Foundation[53]), Crist signed a law expanding health coverage statewide for autism disorders and legislation expanding low-income coverage and creating public and private insurance options in Florida.[54][55][56][57][58][59]