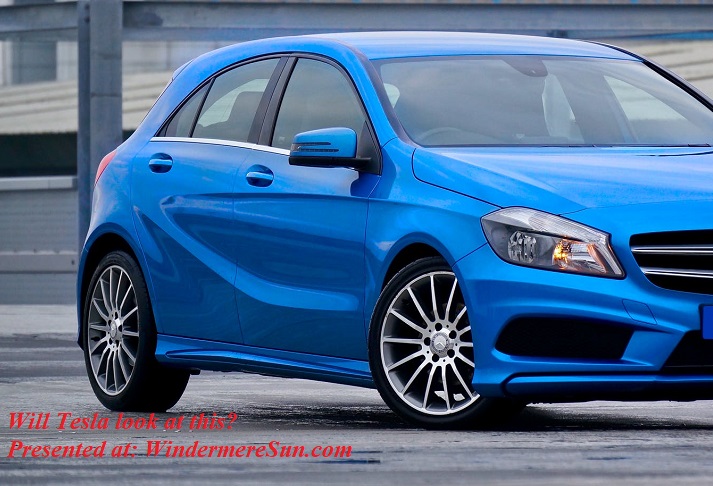 Will Tesla Model 2 look like this? (Presented at: WindermereSun.com)

Tesla is constantly at the head of the pack. It’s been reported that Tesla will be aiming to release a $25,000 fully autonomous hatchback EV in 2003, likely without steering wheel. There are also reports of possibly the new Tesla Model 2 at $19,000 0r $15,000 (these are probably just result of wishful thinking)…we shall see, in the video published on Aug. 12, 2021, “The Big NEW Tesla Model 2! (Updates)“, below:

Text from the video above, by Tesla Unity, in italics, below:

GAMEOVER! $15,000 Tesla Model 2 Is Coming Sooner than Anyone Thinks – End OF Gas THERE HAVE BEEN NUMEROUS TIMELINES IN THE PAST ABOUT THE $25,000 TESLA EV’S LAUNCH; THERE HAVE BEEN NUMEROUS TIMELINES IN THE PAST ABOUT THE $25,000 TESLA EV’S LAUNCH; Elon Musk has told Tesla employees that the automaker is aiming to release its previously announced $25,000 electric car in 2023; The CEO hinted that it might not even be equipped with a steering wheel; At Tesla Battery Day last year, CEO Elon Musk announced that Tesla will be making a $25,000 electric car; The CEO commented in the announcement: Tesla will make a compelling $25,000 electric vehicle that is also fully autonomous; He made it clear that this new price point is achieved through Tesla’s new battery cell and battery manufacturing effort, which could reduce battery costs by over 50%; The $25,000 Tesla electric car, which is often referred to as the “Tesla Model 2,” has been likened to a new electric hatchback that Tesla has been planning to produce at Gigafactory Shanghai in China and export globally; Last year, Tesla announced plans to establish a new R&D center in China to build “a Chinese-style” electric car; Tesla started taking design submissions for its Chinese-made small electric car last summer and started hiring for the program shortly afterward; At the time, the automaker also released this early design drawing of a small electric hatchback; It led many to think that it was the design direction and form factor that Tesla is going for in the upcoming electric vehicle: We recently reported on some media reports coming out of China that claimed the production of the Model 2 could start imminently; However, we did warn that this isn’t likely to happen; Now Elon Musk has confirmed a better idea of the planned timing to release the new cheaper Tesla vehicle in a company-wide meeting held last night; Sources who were at the meeting told Electrek that the CEO said Tesla was aiming to start production of the new $25,000 electric car in 2023; In his comments, Musk linked the release of the new Model 2 (not an official name) to Tesla achieving a deployable full self-driving system and even asked Tesla employees: “Do we want to have this car come with a steering wheel and pedals?” He made it sound likely that the new Tesla vehicle will not even be equipped with a steering wheel; Back in 2019, Tesla unveiled an image of a vehicle without a steering wheel and pedals and said the goal was to release such a vehicle within two years: Tesla is currently trying to release its Full Self-Driving Beta software to its wider fleet in the US by the end of the month; Once the software, which still requires driver attention, is out, Tesla will improve it using data from the fleet and try to make it several times safer than human drivers in order to achieve regulatory approval to use it as a true full self-driving system; The progress made on that front will dictate whether or not the new Tesla vehicle will come with a steering wheel or not; WHAT MAKES THE $25,000 TESLA AN ANTICIPATED PRODUCT? There’s no denying that the biggest catch of this EV will be its $25,000 starting price; And, if all the stars align, the Model 2 could cost as low as $18,000 for some lucky birds; How, you ask? Well, the Biden administration is looking to pass a Green Act that would triple the federal tax credit cap for electric vehicles; The tax credit will be offered on 600,000 vehicles from each automaker instead of the current cap of 200,000 vehicles; As we know, Tesla has surpassed the 200,000-cap and isn’t eligible for a federal tax credit under the current regime; But, if the Green Act comes into play, 400,000 more vehicles from Tesla will be eligible for a federal tax credit of up to $7,000; $500 less than the first cap; Mind you, this is without factoring in the state credits, which bring down the effective price considerably lower; Check out how cheap the new Ford F-150 Lightning costs in some states; Tesla delivered 235,000 cars in the US in 2020 (499,550 worldwide); This means the company could exhaust its fresh cap in less than two years; The company started 2021 even stronger, delivering 184,800 Teslas all around the world, thus relishing the best quarter in its 13-year history; Tesla sub $20,000 compact car is on its way and it could mean the end of gas cars. Giga Shanghai is preparing a design center that will unlock a much more affordable electric vehicle. Elon Musk has announced battery advances and reduced the number of parts across the company’s vehicle lineup. Tesla’s 4680 batteries combined with smaller vehicles and cheaper Lithium Iron Phosphate batteries, could be the key to a $19,999 Tesla. This could sweep the market and drastically speed up the switch from gas cars to electric vehicles.

All-New Fresh Updates About Tesla Model 2 Today’s video will show you All-New Fresh Updates About Tesla Model 2. Speculation has swirled around a sub-Model 3 offering since Tesla revealed a drawing of a compact electric hatchback last year, allowing the EV automaker to compete with the Nissan Leaf and Chevrolet Bolt. Despite Tesla’s tradition of providing hints about new models for years before its debut, little has been shared about the progress of the Model 2, as it has been unofficially dubbed. Tesla claims it can build a fully autonomous Model 2 hatchback car for $25,000 that uses 4680 batteries and has a range of around 250 miles. When Tesla unveils the Model 2, which is considered a compact electric vehicle, it will usher in a new era of electric vehicle acceptance, signaling the end of all other electric cars. Because of that price tag, as well as the demand of its target markets—particularly China—some industry experts believe it should be a bigger priority for Tesla than the controversially styled Cybertruck or the pricey, rocket-assisted Roadster. The car would be built in China for the domestic market as well as for export, in the video published on Sep. 6, 2021, “All New Fresh Updates About Tesla Model 2“, below: