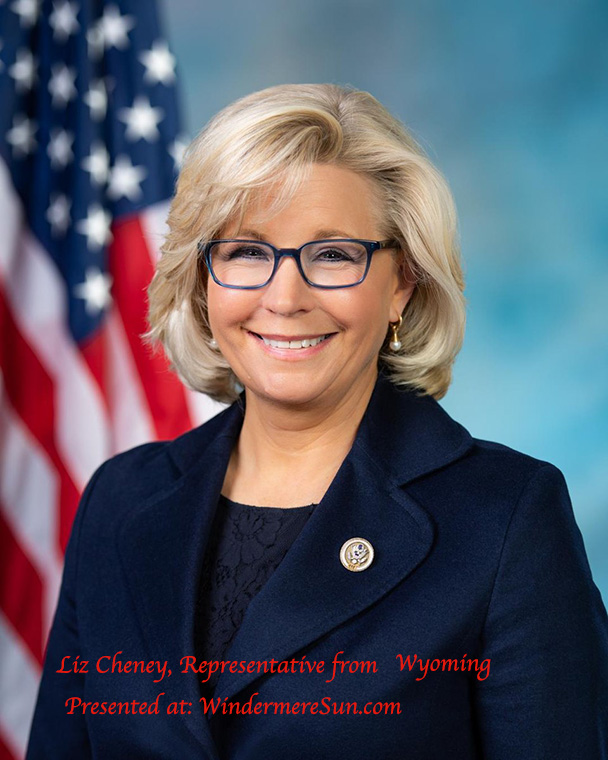 Liz Cheney tells Lesley Stahl about running for re-election as an anti-Trump Republican in Wyoming, where her own party there has called for her resignation, and joining the House Select committee investigating the January 6 Capitol riot, in the video published on Sep. 26, 2021, “Liz Cheney: The 60 Minutes Interview“, below:

To learn more about Liz Cheney, please refer to the excerpt from wikipedia, in italics, below:

Elizabeth Lynne Cheney[1] ( born July 28, 1966)[2] is an American attorney and politician who has been the U.S. Representative for Wyoming’s at-large congressional district since 2017. She was deputy assistant secretary of state for near eastern affairs in the George W. Bush administration and was the chair of the House Republican Conference, the third-highest position in the House Republican leadership, from 2019 to 2021.

Cheney is the elder daughter of former Vice President Dick Cheney and Lynne Cheney. She held several positions in the U.S. State Department during the George W. Bush administration, notably as Deputy Assistant Secretary of State for Near Eastern Affairs and Coordinator for Broader Middle East and North Africa Initiatives. She promoted regime change in Iran while chairing the Iran Syria Policy and Operations Group with Elliott Abrams. In 2009 Cheney and Bill Kristol founded Keep America Safe, a nonprofit organization concerned with national security issues that advocated the positions of the Bush–Cheney administration. She was a candidate for the 2014 election to the U.S. Senate in Wyoming, challenging three-term incumbent Mike Enzi, before withdrawing from the race. In the House of Representatives, she holds the seat her father held for a decade, representing Wyoming from 1979 to 1989.[3]

Regarded as a leading ideological conservative[4] in the Bush–Cheney-era tradition and a representative of the Republican establishment,[5] Cheney is a neoconservative, known for her focus on national security, her support for the U.S. military, a pro-business stance,[6] foreign policy views, and for being fiscally and socially conservative.[7] Cheney is considered one of the leaders of the neoconservative wing of the Republican Party[6] and was critical of the foreign policy of the Donald Trump administration while simultaneously voting steadfastly in support of its overall agenda.[8][9][10][11]

Cheney later supported the second impeachment of Donald Trump for his role in the 2021 storming of the U.S. Capitol.[12] Because of her stance on the Capitol riot, her impeachment vote and opposition to Trump’s false stolen-election narrative, pro-Trump Freedom Caucus members of the House Republican Conference attempted to remove her from party leadership in February 2021. That effort failed, and Cheney remained conference chair until mid-May, when pro-Trump members of the House again pushed for her removal. With House Minority Leader Kevin McCarthy supporting the effort, Cheney was removed from her position.[13][14][15] After her battles with Republican leadership, Cheney received death threats, leading her to spend $58,000 on a private security detail.[16] She has said that she intends to be “the leader, one of the leaders, in a fight to help to restore our party”[17] and that she may be interested in a future presidential run.[18] In July 2021, Speaker Nancy Pelosi appointed Cheney to the House Select Committee on the January 6 Attack. Two months later, she was made vice chair of the committee.