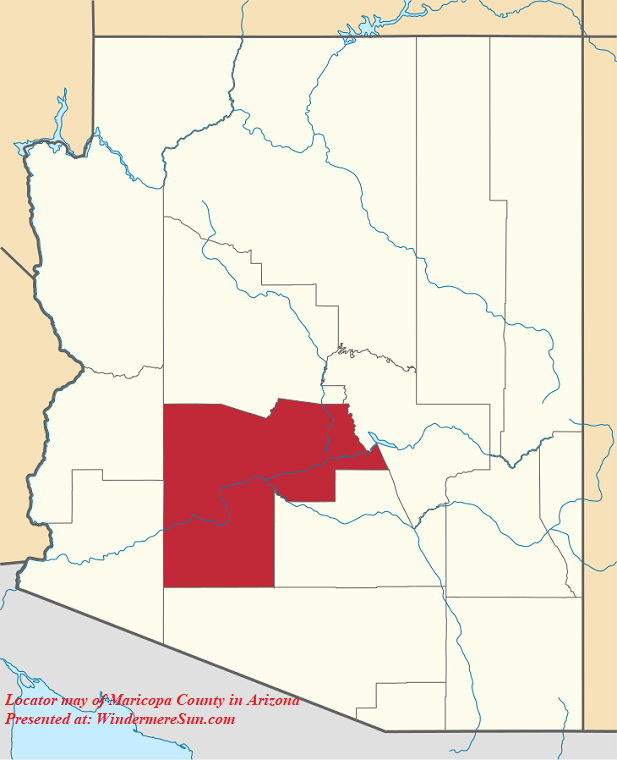 Locator map of Maricopa County of Arizona (Presented at: WindermereSun.com)

Arizona’s Senate President Karen Fann previously ordered the controversial partisan audit of the result of 2020 Presidential election, commonly referred to as the Arizona Audit. According to the GOP-led review, released on Friday, September 24, 2021, finding their ballot count increased Biden’s original vote count by 360 votes. It’s been concluded that President Biden did indeed receive more votes in Arizona’s most populous county, Maricopa county, than former President Donald Trump for the 2020 election. In fact, the hand recount for Biden exceeded the county’s original tally by 99 votes while Trump received 261 fewer votes than the the original tally.

Arizona’s Senate President Karen Fann is calling on the state attorney general to investigate the findings of the election audit of Maricopa County, which found no evidence of fraud, in the video published on Sep. 25, 2021, “Fann calls for investigation in election audit results“, below:

Secretary of State Katie Hobbs says she didn’t need the report to tell her what most people already know: President Joe Biden won the election, in the video published on Sep. 24, 2021, “Arizona secretary of state blasts ‘fake’ election audit“, below:

Overall, Biden won the 2020 election by over More details may be read from excerpt from wikipedia, in italics, below:

The 2021 Maricopa County presidential ballot audit, commonly referred to as the Arizona audit, was an examination of ballots cast in Maricopa County during the 2020 United States presidential election in Arizona initiated by Arizona Senate Republicans and carried out by private firms. Begun in April 2021, the audit stirred controversy due to extensive previous efforts by Trump and his allies to overturn the election and due to assertions of rule violations and irregularities in the conduct of the count,[1] leading to claims that the audit was essentially a disinformation campaign.[2][3][4] In June 2021, Maggie Haberman of The New York Times and Charles Cooke of National Review reported Trump had told associates that based on the results of the audit, he would be reinstated as president in August 2021.[5] By early August, no evidence of widespread fraud had surfaced.[6] The auditors released a report on September 24, 2021, finding their ballot count increased Biden’s margin of victory by 360 votes.[7][8][9]

From the beginning of the audit, several concerns surfaced, including how the audit was being conducted, its legality, the conduct of auditors, and security issues at the site.[10] The audit spawned interest in pursuing similar efforts in other states, causing the Justice Department to warn Republican legislatures of potential violations of federal law.[11][12] Conspiracy theory issues also arose as many commentators across the political spectrum, including Republicans, characterized the effort as a sham or “fraudit” that was an element of the big lie that the presidential election had been stolen from Trump.

Despite results from Arizona’s partisan election review confirming Joe Biden’s 2020 victory, Donald Trump continues his campaign of lies about the election. The Atlantic’s Adam Serwer and Matthew Dowd, founder of CountryOverParty joined American Voices with Alicia Menendez to discuss the Big Lie’s threat to American democracy, in the video published on Sep. 26, 2021, “Trump’s Campaign Of Lies | Threatening American Democracy“, below:

Washington Post National Correspondent Philip Bump speaks with Lindsey Reiser about the true extent of Trump’s dishonesty amid his ongoing efforts to undermine and overturn the election, and the “political army” that has emerged from his years of lies, in the video published on Sep. 26, 2021, “Will Trump Ever Stop Lying?” below:

Steve Schmidt and Stuart Stevens join Jonathan to talk about Trump’s continued assault on our democracy, as the the former President continued to spew election lies at a rally in Georgia, in the video published on Sep. 26, 2021, “Trump’s Attack On Democracy“, below:

Steve Schmidt, political consultant, talks with Rachel Maddow about the ominous radicalization of the Republican Party as it turns against democracy and is swept up in an autocratic movement beholden to Donald Trump, in the video published on Sep. 25, 2021, “Schmidt: Republicans Are Driving Chaos, Promising Order With Easy Scapegoats”, below:

Former Republican strategist Steve Schmidt joins Nicolle Wallace to discuss the future of the Republican party and why George W. Bush is leaving retirement to campaign for Wyoming Congresswoman and Trump-critic Liz Cheney, in the video published on Sep. 23, 2021, “Steve Schmidt: The GOP is ‘No Longer Faithful To American Democracy’“, below: