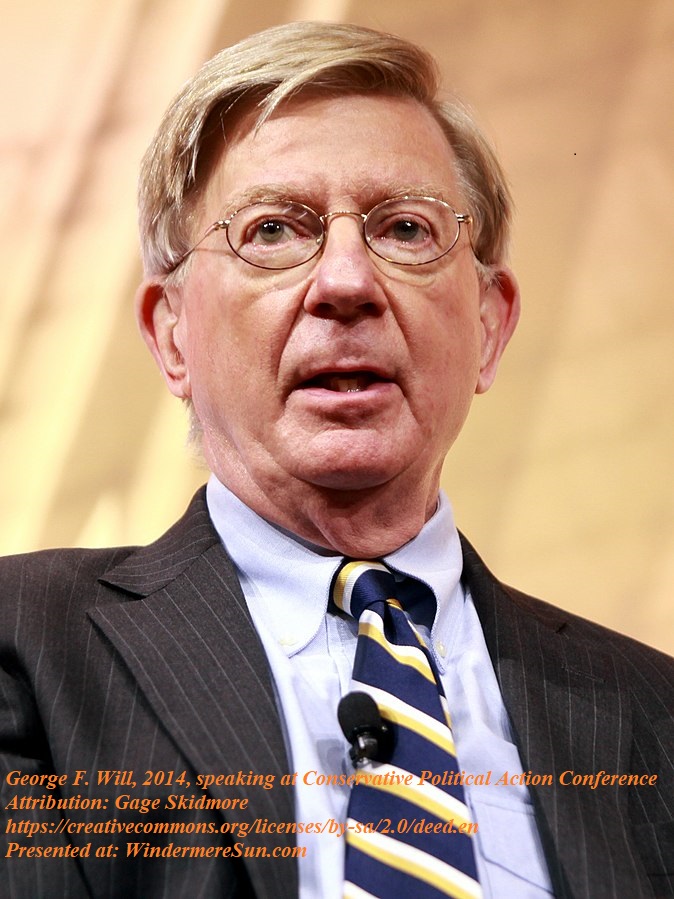 Washington Post columnist, George F. Will discusses his new book, American Happiness and Discontents and the state of the Republican Party, in the video published on Sep. 16, 2021, “George Will: Republican Officeholders ‘Are Terrified’ Of Their Voters“, below:

Excerpts from this book and the interview above and below, in italics, below:

“It has been well said that the United States is the only nation founded on a good idea, the proposition that people should be free to pursue happiness as they define it. In recent years, however, happiness has been elusive for this dyspeptic nation...”

“...in which too many people think and act as tribes and define their happiness as some other tribe’s unhappiness. As a quintessentially American voice, that of Robert Frost, said, “The only way out is through.” Perhaps the information…the reasoning, and, I hope, the occasional amusements in this book can help readers think through, and thereby diminish, our current discontents.”

“This country was not made by fragile people.“

“A political doctrine without a political party is an orphan in the chilly world. And the fact is, there is no place, right now, for conservatism in the Republican Party because we have an absolutely unique situation. We have a political party in which most of the elected officials are (they won’t say this, but it’s the truth) frightened of their voters. Because they are frightened of them, they don’t much like them. Because they don’t like them, they don’t respect them. So it’s a very tension-ridden relationship between the Republican elected officials and the Republican base. Until the Republican Party gets back to something like the principles that made it a vibrant force in the 80’s and 90’s, conservatives are, like I said, are orphans.”

“People are still clamoring to get into the United States, for all of its problems because for all of its problems, it’s still a good place to try to improve your life. Second: United States with its stupendously productive research universities, its industrial base, its continental market, its industrious population. United States is still an enormous energy, a source of economic energy and growth. No one ever got rich betting against the United States and we’re not going to do that. We have enormous problems and we are seeing all the possible pathologies of democratic politics writ large, in the promiscuous printing of money as though there’s no tomorrow, by a political class that feels that it has noun theories new monetary theory and all the rest to justify this. These are transaction costs of democracy at all times. Churchill is supposed to have said that the American people invariably make the right decision after they have exhausted all the alternatives. I’d like to think we’re pretty far down the list of alternatives and we’ll start making the right decision.”

Are Americans being consumed by discontent? Vaccine mandates, abortion laws, and disagreement about the very notion of freedom are widening the political divide. What does all this mean for the pursuit of happiness? It’s the focus of Pulitzer Prize-winning columnist George Will’s new book, and he speaks with Walter Isaacson about his insights on resentment in today’s America, in the video published on Sep. 17, 2021, “George Will: Donald Trump is on the Way to Becoming a Bore | Amanpour and Company“, below:

The storied conservative columnist said he believes ‘more and more people’ will become bored with the former president, in the video published on Sep. 15, 2021, “George Will predicts Donald Trump will become ‘a bore, and he might actually slink off stage’“, below:

Veteran conservative columnist and thinker George Will joins MSNBC’s Brian Williams to discuss how Trumpism – not conservatism – became the prevailing principle of the modern Republican Party, in the video published on Sep. 18, 2021, “George Will On How Trumpism Became Republican Dogma“, below:

George F. Will is the Pulitzer Prize award-winning columnist for the Washington Post and a regular contributor to MSNBC. He is also author of several influential books, including The Conservative Sensibility.

“...this makes an American 80 year old’s finishing sprint especially fun because it can be focused on this fact: to live a long life braided with the life of a nation conceived in liberty and dedicated to an imperishable proposition is simply delightful.” concluded in the video above.

I just want to make one editorial comment regarding climate change and future of energy with respect to the interview of the video abo: the future of energy is in solar and wind rather than nuclear. All other observations by George F. Will is quite accurate.

George Will discusses liberalism, conservatism, and the future of American political ideology with Institute for Humane Studies president Emily Chamlee-Wright. This wide-ranging conversation includes discussion of Will’s recent book “The Conservative Sensibility,” where he argues that the Founders’ beliefs in natural rights, limited government, religious freedom, and in human virtue and dignity ushered in two centuries of American prosperity. Will says those principles that make our democracy possible are now under threat, both from progressives on the left and from elements within conservatism on the right. Will also explains some of the confusion between terms like “liberal” and “conservative,” since American conservatism draws heavily from the classical liberal intellectual tradition, which would be referred to as “liberalism” in Europe, and is distinct from European conservatism. Will emphasizes the importance of Founders like James Madison, who advanced the notion of natural rights that pre-exist government, and later thinkers like Friedrich Hayek, who spoke of the “fatal conceit” of central planners. Will criticizes progressive thought, including figures like Woodrow Wilson, and also criticizes conservatives who are abandoning classical liberal principles to embrace populism or big government, including “common good conservatives.” in the video published on May 25, 2021, “George Will on Liberalism and Conservatism“, below: