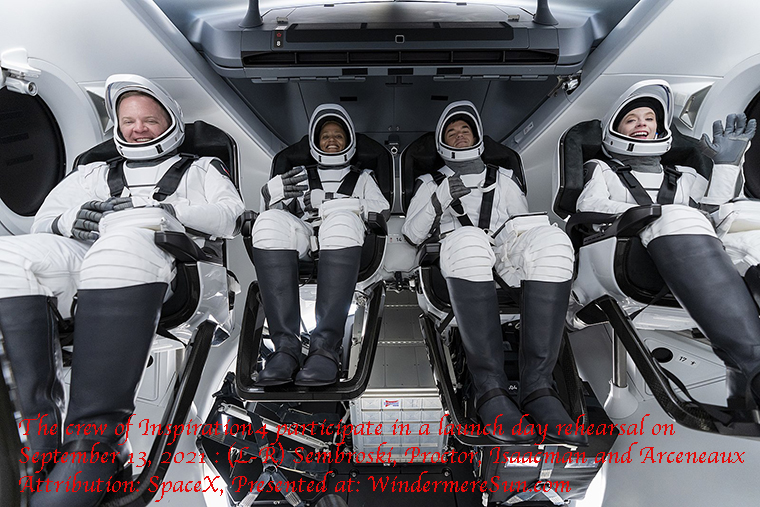 The crew of Inspiration4 participate in a launch day rehearsal on September 13, 2021 : (L-R) Sembroski, Proctor, Isaacman and Arceneaux (Attribution: SpaceX, Presented at: WindermereSun.com)

According to wikipedia for the topic of Inspiration4, in italics, below:

Inspiration4 (stylized as Inspirati④n) is an upcoming human spaceflight mission operated by SpaceX on behalf of Shift4 Payments CEO Jared Isaacman. The mission aims to complete the first orbital spaceflight with only private citizens aboard, as part of an effort to raise awareness for the St. Jude Children’s Research Hospital in Memphis, Tennessee. Four crew members; Hayley Arceneaux, Christopher Sembroski, Sian Proctor, and Isaacman himself will spend three days in orbit aboard Crew Dragon Resilience, which was outfitted with a cupola unique to this flight in place of a docking hatch. The four crew will represent the four values promoted by the mission: leadership; hope; generosity; and prosperity. The mission is planned to launch on 16 September 2021 UTC (which translates to September 15, 2021, at 8:02 pm EDT), from the Kennedy Space Center‘s Launch Complex 39A atop a twice-flown Falcon 9 launch vehicle.[citation needed]

SpaceX is targeting Wednesday, September 15 at 8:02 p.m. EDT (Thursday, September 16 at 00:02 UTC) for launch of the Inspiration4 mission – the world’s first all-civilian human spaceflight to orbit – aboard SpaceX’s Falcon 9 rocket and Dragon spacecraft from historic Launch Complex 39A at NASA’s Kennedy Space Center in Florida. Approximately three days after liftoff, Dragon and the Inspiration4 crew will splash down at one of several possible landing sites off the Florida coast, in the video streamed on Sep. 15, 2021, “Inspiration4 | Launch“, below:

Join Karamo and Soledad O’Brien for a special livestream event as we countdown to the launch of Inspiration4, the first all-civilian mission into orbit, taking off from Kennedy Space Center. Stay tuned for an all-access pass behind the historic mission featuring special guests and exclusive segments, in the video published on Sep. 15, 2021, “Countdown: Inspiration4 Mission to Space Live Launch | Netflix“, below:

Inspiration4 will be the first human spaceflight to orbit Earth with only private citizens on board. Promoting and raising money for the St. Jude Children’s Research Hospital, the mission aims to promote four values: leadership, hope, generosity, and prosperity.[5][6][7] Inspiration4 is led by Shift4 Payments CEO Jared Isaacman, an experienced pilot with qualification in multiple military jets,[8][9] who will also board the flight representing the value of leadership. Isaacman procured the flight and its four seats from SpaceX, and donated two of the seats to St. Jude. Hayley Arceneaux, a physician’s assistant at the hospital and herself a survivor of bone cancer, was selected by the hospital to board the flight representing the value of hope.[10] St. Jude raffled the second seat in a fundraiser aimed at raising US$200 million for the hospital.[needs update][11] An undisclosed person from Embry–Riddle Aeronautical University ultimately won the raffle, but decided due to personal reasons to give the seat to his friend, U.S. Air Force veteran Christopher Sembroski, who had also participated in the raffle.[12][13] He will board the flight representing the value of generosity.[12][13] Entrepreneur Sian Proctor was selected by Shift4 Payments to board the flight representing the value of prosperity, through a competition modeled after Shark Tank that rewarded the best business idea to make use of Shift4’s commerce solutions.[14] The panelists in the competition included Salesforce CEO Marc Benioff, Fast Company editor Stephanie Mehta, engineer Mark Rober, and Bar Rescue host Jon Taffer.[15]

Inspiration4, the world’s first all-civilian mission to orbit, is targeted to launch no earlier than 8:02 p.m. EDT on Wednesday, September 15, 2021. Watch the crew discuss their mission from historic Launch Complex 39A at NASA’s Kennedy Space Center in Florida, in the video published on Sep. 14, 2021, “Inspiration4 | Q&A with Inspiration4 Crew“, below:

ABC News’ Gio Benitez reports on the countdown to the SpaceX launch of the first civilians going into orbit with no astronauts. ABC News Live Prime, Weekdays at 7EST & 9EST WATCH the ABC News Live Stream Here, in the video published on Sep. 14, 2021, “Historic civilian space mission prepares for launch“, below:

Crew Dragon Resilience will be used to fly the Inspiration4 mission. It will be the capsule’s second flight, after Crew-1.[14][19] Launching 136 days after the conclusion of Crew-1, Resilience will break the 227-day record for fastest turnaround of a Crew Dragon set by Endeavour following the launch of Crew-2.[1] The spacecraft’s docking adapter, normally used to dock with the International Space Station, has been replaced for this mission by a single monolithic domed glass window inspired by the Cupola module, allowing 360° views outside Resilience‘s nose.[20] It will be the largest single-piece window ever flown to space.[21] The cupola is protected during launch and reentry by the spacecraft’s retractable nosecone, which will also house a custom camera enabling photography of the vehicle’s interior and exterior during flight.[1] The cupola is ultimately removable, so that Resilience can easily be reconfigured for missions in the future that require docking, following the conclusion of Inspiration4.[1] Four Draco thrusters located on the spacecraft’s nose necessitated the installation of four heat shield tiles on the cupola’s exterior, which will protect the glass dome from engine exhaust during reaction control maneuvers.[1]

Resilience will launch on 16 September 2021 at 00:02 UTC (15 September 2021 at 20:02 EDT), atop Falcon 9 Block 5 booster B1062 from Kennedy Space Center‘s Launch Complex 39A.[2] The spacecraft will be launched into a low Earth orbit with an apogee of 575 km (357 mi), and an inclination of 51.6°.[4] Following three days in orbit, the spacecraft will splashdown in the Atlantic Ocean.[22] After Resilience‘s launch, three Dragon spacecraft will be simultaneously flying, as Endeavour flies the Crew-2 mission and C208 flies the CRS-23 mission. Inspiration4 will be the first crewed orbital spaceflight since STS-125 in 2009 to not visit a space station. Each of the four crew aboard have been assigned an individual call sign for communications. Isaacman’s call sign is “Rook”, while Proctor’s is “Leo”, Arcenaux’s is “Nova”, and Sembroski’s is “Hanks”.[citation needed]

In the video published on Sep. 13, 2021, “Countdown to Inspiration4 launch from Kennedy Space Center“, below:

Inspiration4’s first all-civilian mission to space aboard a SpaceX rocket will include St. Jude Children’s Research Hospital physician assistant and cancer survivor Hayley Arceneaux. The 29-year-old represents the hope pillar of the mission and will be the youngest American to travel to space. As she prepares for this historic journey, Arceneaux writes a note to her younger self for our Emmy-nominated series, Note to Self, in the video published on Sep. 14, 2021, “Inspiration4 civilian astronaut, cancer survivor Hayley Arceneaux writes a note to her younger se..“, below:

In the video published on Sep. 9, 2021, “Inspiration4 crew arrives at Kennedy Space Center ahead of launch“, below:

The SpaceX Inspiration4 mission will be the first all-civilian space flight into orbit. Mark Strassmann reports the mission, funded by billionaire Jared Isaacman, will raise money for St. Jude Children’s Research Hospital, in the video published on May 3, 2021, “SpaceX to launch four American civilians on historic, three-day voyage around Earth“, below: