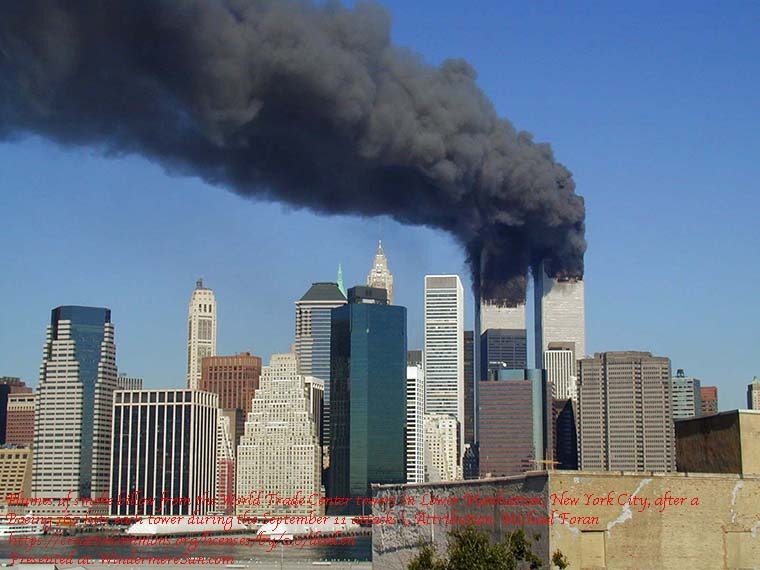 Plumes of smoke billow from the World Trade Center towers in Lower Manhattan, New York City, after a Boeing 767 hits each tower during the September 11 attacks (Attribution: Michael Foran, https://creativecommons.org/licenses/by/2.0/deed.en, Presented at: WindermereSun.com) 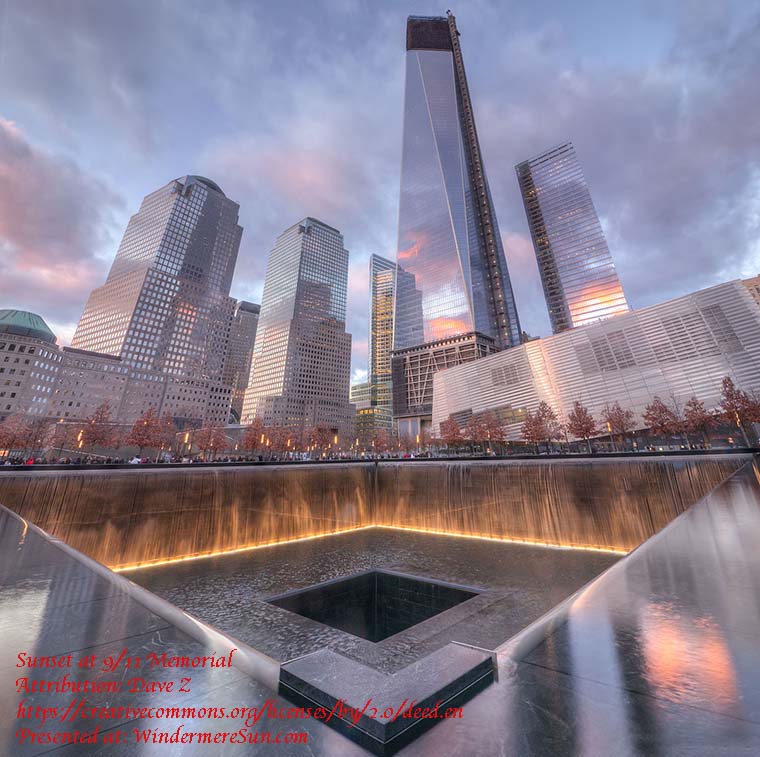 There are moments in our lives when the image, scent, and every bit of sensory perceptions associated with that very instant would forever be deeply imprinted in our memory. September 11, 2001, at 9:05 am, was that moment when I saw the national televised coverage of the second tower, the South Tower of the World Trade Center, being attacked by terrorists, forever ingrained into the American psyche. It is not until twenty years later, in 2021, after President Joe Biden commanded complete departure from Afghanistan, that we finally are able to truly begin to heal.

The White House on Friday released video of U.S. President Joe Biden giving a speech to commemorate the victims of the September 11 attacks ahead of the 20th anniversary, in the video published on Sep. 11, 2021, “Biden honors victims of 9/11 attacks“, below:

At a 9/11 anniversary ceremony in Shanksville, Pa., former President George W. Bush recounted the heroism of those passengers aboard Flight 93 as well as the brave servicemen and servicewoman who have responded since that time, in the video published on Sep. 11, 2021, “Full Speech: Pres. Bush Speaks At Shanksville 9/11 Ceremony“, below:

A total of four U.S. presidents have presided over the war in Afghanistan (George W. Bush, Barack Obama, Donald Trump and Joe Biden.) Here’s how the presidents have talked about the conflict as it evolved over two decades, in the video published on Sep. 7, 2021, “What four presidents said about Afghanistan over 20 years“, below:

Let’s learn from California Congresswoman Barbara Lee, the only Congress person who spoke up twenty years ago about the decision to send military into Afghanistan. In the video below, Congress woman Barbara Lee joins Bill Maher on the eve of the 20th anniversary of 9/11 to reflect on her vote against military involvement in Afghanistan, in the video published on Sep. 10, 2021, “Rep. Barbara Lee: The Lessons of 9/11 | Real Time with Bill Maher (HBO)“, below:

Blind hatred of America is just as blinkered as blind love. And we Americans should look at the situation in Afghanistan to really get some perspective about where we live, in the video published on Aug. 27, 2021, “New Rule: The Lesson of Afghanistan | Real Time with Bill Maher (HBO)“, below:

President Biden was joined by former Presidents Barack Obama and Bill Clinton to observe a moment of silence in New York for the victims of the September 11th terror attacks. Later, Mike Low, the father of a flight attendant who died aboard the American Airlines flight that flew into the World Trade Center on September 11, 2001, paid tribute to the victims, in the video published on Sep. 11, 2021, “Biden joined by Obama to observe 9/11 moment of silence“, below:

To learn more about the aftermath of 9/11, from a recently released Netflix film WORTH. An excerpt from wikipedia, about Worth, in italics, below:

Worth is a 2020 biographical film directed by Sara Colangelo, from a screenplay by Max Borenstein.[2] It stars Michael Keaton, Amy Ryan, Stanley Tucci, Tate Donovan, Shunori Ramanathan and Laura Benanti. It had its world premiere at the Sundance Film Festival on January 24, 2020. The film was released in a limited release and on Netflix on September 3, 2021.

An attorney learns a lesson in empathy when he is faced with the near-impossible task of determining how to compensate families who suffered incalculable losses as a result of the September 11th attacks in 2001. Based on true events. Starring Michael Keaton, Stanley Tucci, Amy Ryan. Based on true events, in the video published on Aug. 9, 2021, “WORTH | Official Trailer |Netflix“, below: