Ranked-Choice Voting Can Save American Politics 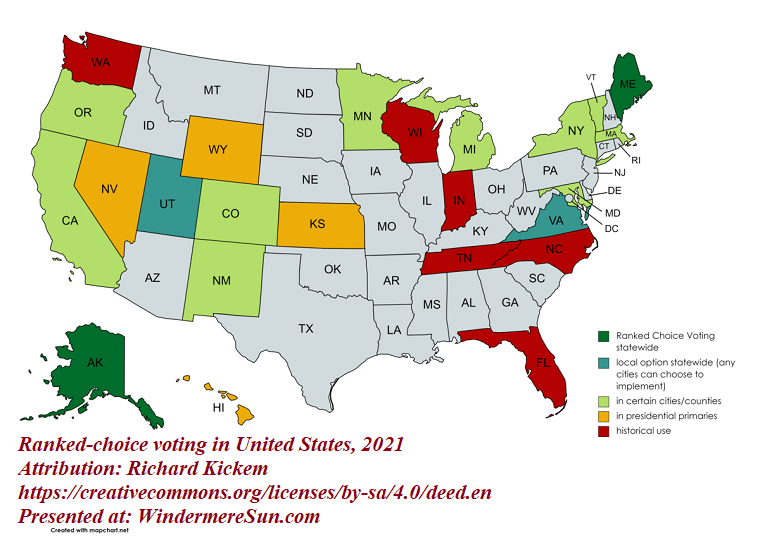 After our previous post Andrew Yang, Creating A Third Party & Offering A Vision Of Opportunities, Freedom, Equality, & Abundance,  was published, I’ve received some questions about rank-choice voting from our readers in TX, AZ, ID, MT, OH, KY. It’s a method of voting more likely to receive voter satisfaction, avoid polarization and mud-slinging, and is gaining momentum across the country (heck, that’s how my family votes to decide on weekend dinner or movie to maintain family harmony!). So, allow me to clarify what ranked-choice voting in the United States is all about.

Maybe you’ve never heard of ranked choice voting, but it’s gaining momentum across America. Ranked choice voting works when there are multiple candidates running for office, such as presidential primaries or congressional races. Instead of choosing one candidate, voters rank their top choices for office (similar to how the Olympics awards gold, silver, and bronze medals, and to how the Academy Awards decides its Oscar winners). Ranked choice voting is used on some level in 26 states. Five states used it in 2020 in their Democratic presidential primary elections. Maine also uses this approach to vote statewide. NBC NBCLX Storyteller Chase Cain demonstrates how ranked choice voting works with augmented reality from NBC’s Emerging Tech team. He also talked to voters and politicians about efforts to expand ranked choice voting from New York to California, in the video published on April 9, 2020, “Is Ranked Choice Voting a Better Way to Pick a President? | NBCLX“, below:

Excerpt below, in italics, are taken from wikipedia:

Ranked-choice voting (RCV) is a ranked voting system being used in some states and cities in the United States in which voters may prioritize (rank) their choice of candidates among many, and a procedure exists to count lower ranked candidates if and after higher ranked candidates have been eliminated, usually in a succession of counting rounds. In practice, there are several ways this can be implemented and variations exist; instant-runoff voting (IRV) and single transferable vote (STV) are the general types of ranked-choice voting systems used in the United States.

Ranked-choice voting ballots are used by all overseas voters in federal elections that might have a runoff election: Alabama, Georgia, Louisiana, Mississippi and South Carolina.[3] RCV is also widely used in non-governmental elections in the United States. Examples include: student elections at more than 85 colleges and universities;[4] state arms of the Republican Party in elections held as part of state conventions in three states in 2020 and in Virginia for nominating statewide candidates in 2021; elections for officers in major associations such as the American Chemical Society, American Mensa, American Philosophical Association, and Society of Actuaries;[5] and the selection of the Oscar for Best Picture by the Academy of Awards.[6] RCV was used by all voters in four states in the 2020 Democratic Party presidential primaries.[7]

Between 1912 and 1930, limited forms of RCV (typically with only two rankings[8]) were implemented and subsequently repealed, as also occurred in some cities in 2009–2010.

San Francisco’s new mayor will be chosen next month by a system few voters can fully explain, much less understand, and a process that even the guy who runs the city’s elections struggles to describe, in the video published on May 15, 2018, “Ranked Choice Voting!? Here’s How it Works“, below:

A movement has been growing across the country to change how the system works. Voters in places like Maine, San Francisco, and Santa Fe, New Mexico, are allowed to rank their choices in order of preference on the ballot instead of voting for only one person. Initial surveys of ranked-choice voting in Minneapolis, Saint Paul, Minnesota, and Cambridge, Massachusetts, show voters are more satisfied with the conduct of local campaigns than in similar cities with plurality, winner-takes-all voting, according to a recent report by Western Washington University’s Todd Donovan and colleagues, “Campaign civility under preferential and plurality voting.” Could ranked-choice voting save Washington? Watch the video to find out how an initiative that both late Senator John McCain and former President Barack Obama supported could help or hurt our democracy, in the video published on Nov. 4, 2019, “Can Ranked-Choice Voting Change U.S. Elections?” below:

A movement has been growing to change how voting works. Places like Maine and Santa Fe are choosing to rank their representatives on the ballot instead of voting for only one person. Initial surveys show voters are more satisfied with the conduct of local campaigns than in similar cities with plurality, winner-takes-all, voting. Can ranked-choice voting save Washington? Find out how an initiative that both Senator McCain and President Obama supported could help or hurt our democracy, in the video published on Nov. 4, 2019, “Can Ranked-Choice Voting Save Washington“, below:

Tired of voting for the lesser of two evils? Our current election system is broken, and it yields worse and worse candidates every cycle. Ranked Choice Voting can help solve that problem, in the video published on Oct. 16, 2020, “How Ranked Choice Voting Can Save American Politics“, below:

Rank choice voting lets voters choose candidates in order of preference instead of picking only one. New York City could be joining a handful of cities that vote like this in their local elections, in the video published on Nov. 5, 2019, “What Is Rank Choice Voting? | NBC News Now“, below:

What if you never had to vote for the lesser of two evils again? Ranked Choice Voting is a small tweak that would be a huge step towards fixing our broken elections, in the video published on May 14, 2017, “Ranked Choice Voting vs The Establishment“, below:

Ranked-Choice Voting is definitely the voting method that would help to increase voter participation, to reduce polarization and mud-slinging and increase national harmony as it had done for our family harmony.

For more on Ranked-choice voting in the United States, please click HERE.