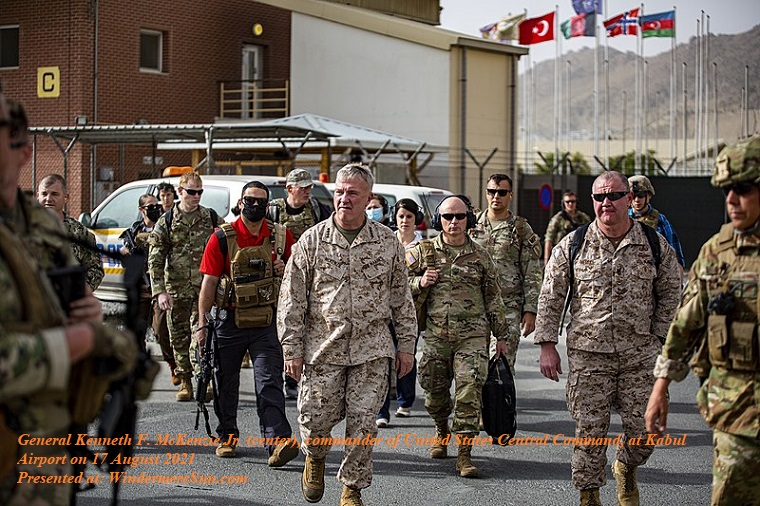 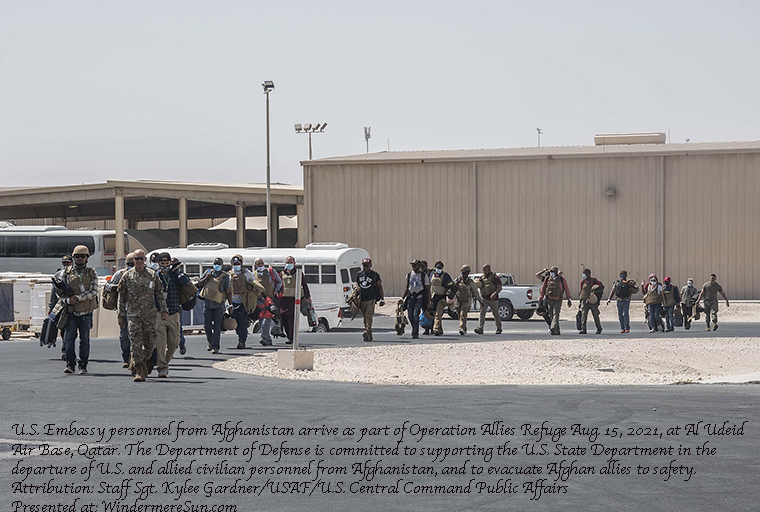 U.S. Embassy personnel from Afghanistan arrive as part of Operation Allies Refuge Aug. 15, 2021, at Al Udeid Air Base, Qatar. The Department of Defense is committed to supporting the U.S. State Department in the departure of U.S. and allied civilian personnel from Afghanistan, and to evacuate Afghan allies to safety. (U.S. Air Force photo by Staff Sgt. Kylee Gardner), Presented at: WindermereSun.com

The U.S. military has officially ended its 20-year mission in Afghanistan with the last troops having left just before August 31 according to officials. We discuss the implications with Peter Baker, Tom Nichols, and Carol Leonnig, in the video published on Aug. 31, 2021, “Biden Praises Troops As U.S. Ends 20-Year Afghanistan Mission“, below:

Veteran Lucas Kunce, who served two tours of duty in Afghanistan, describes the “grim relief” that comes with the end of the war, saying “it should have happened long, long ago.” Foreign affairs analyst David Rothkopf says the war’s mission was clear immediately following 9/11, but the U.S. military soon “drifted back into the same sorts of mistakes that led to the Vietnam debacle.” in the video published on Aug. 30, 2021, “Veteran Says End Of War In Afghanistan Brings ‘Grim Relief’“, below:

NBC News’ Presidential Historian Michael Beschloss reacts to the official ending of the US war in Afghanistan, saying that the US came in the country “with noble motives” and realized that is “a lot harder to end a war than to get into one” in the video published on Aug. 30, 2021, “Michael Beschloss Breaks Down Lessons Learned From The Afghanistan War“, below:

The Taliban has revealed to Al Jazeera it is planning an “inclusive caretaker government” in Afghanistan, which will include leaders from all ethnicities and tribal backgrounds. @osamabinjavaid has more, in the video published on Aug. 30, 2021, “Exclusive: Taliban reveals plans for future government to Al Jazeera“, below:

Lucas Kunce, an Afghanistan Marine veteran running for Senate in Missouri, joined Stephanie Ruhle to share how he feels about the latest in Afghanistan as the U.S. troop withdrawal deadline nears and evacuations continue. He slams officials calling for an extension of the Tuesday deadline. “The same people right now who are saying one more day, one more month, one more dollar are the same people who said that for 20 years … what that means is one more Marine,” he says, in the video published on Aug. 30, 2021, “Afghanistan Veteran: ‘The Taliban Taking Over Was Absolutely Inevitable’“, below:

Twenty years of war for the United States and coalition partners in Afghanistan ended with the collapse of the Afghan government after U.S. troops withdrew from most of the country. The rapid advance of the Taliban forced an evacuation of more than 100,000 people from Afghanistan over the course of the last few weeks, and led to the deaths of 13 U.S. service members. Here’s how the fall of Afghanistan happened so quickly, and what’s next for the war-torn country, in the video published on Aug. 28, 2021, “The Fall Of Afghanistan: How America’s $2 trillion, Two-Decade War Ended In Chaos“, below:

According to Newsweek, four California families remain stuck in Afghanistan after their visit to relatives in Afghanistan during their summer vacations while two families have made it back to the U.S. U.S. government officials and California Rep. Darrell Issa have been working to get the other four families safely evacuated as the other two families landed in San Diego Wednesday night, August 25, 2021.