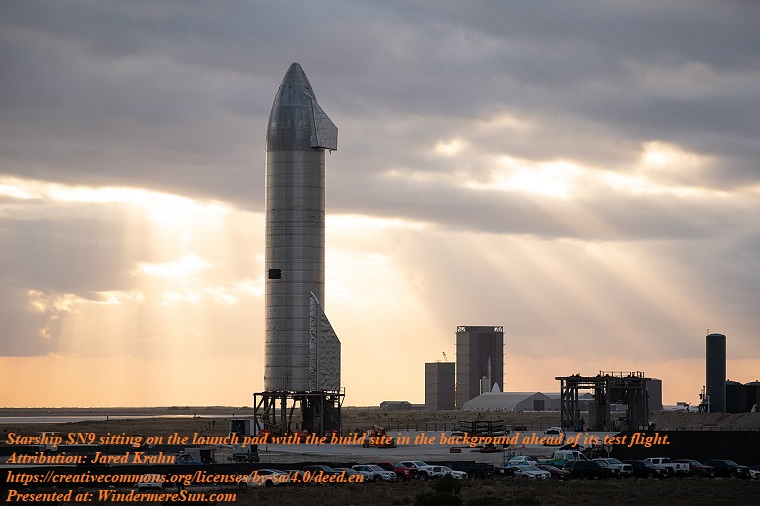 Starship SN9 sitting on the launch pad with the build site in the background ahead of its test flight.
Date 17 January 2021, 06:12:35 (Attribution: Jared Krahn, https://creativecommons.org/licenses/by-sa/4.0/deed.en, Presented at: WindermereSun.com)

SpaceX’s Insane New Starship Leaked by Elon Musk Elon Musk has started planning the next generation of Starships. We all know Starship, SpaceX’s rocket headed for the stars. From the amazing stainless steel that it utilizes to its reusability and cost effectiveness, Starship is just plain amazing. With such ground-breaking technology and innovations, you would think Musk would be satisfied. But that’s not the case. This flagship rocket is just the beginning, and Musk has already begun working on a larger and more capable spacecraft. But what could Musk possibly do to make Starship even better? In this video, we will be taking a sneak peek into Musk’s plans for Starship 2.0, in the video published on Aug. 222, 2021, “SpaceX’s INSANE New Starship LEAKED by Elon Musk“, below:

To find out more about SpaceX Starship, please click HERE or read excerpt from wikipedia, in italics, below:

The SpaceX Starship system consists of a family of spacecraft, a superheavy booster, and a ground support infrastructure, all under development by SpaceX.[15]. When the booster and a suitable spacecraft are stacked together, the result is a fully reusable, two-stage-to-orbit super heavy-lift launch vehicle. Some members of the spacecraft family can return to Earth for reuse, while others are intended to remain in space for other missions. As of August 2021, the two-stage stack is the world’s tallest and most powerful rocket ever built, with more than twice the thrust of the Saturn V.[16] The booster stage named is named Super Heavy[17]. The spacecraft are named “Starship“.[18] Unlike a traditional launch vehicle second stage, the Starship spacecraft acts as a second stage during launch from Earth and then acts in its long duration role once it has reached orbit, as cargo, a passenger‑carrying spacecraft, or a lander to transport cargo and crew to the surfaces of bodies such as the Moon and Mars.[19][1] The booster and some variants of the spacecraft are being designed to be capable of recovery and reflight, while spacecraft that remain in space are designed to be refueled for continued long-term operation. The booster, the spacecraft, and fuel and oxidant storage tanks on the ground are all constructed with stainless steel hulls 9 m (30 ft) in diameter.

Starship system development began in 2016 as a self‑funded private spaceflight project, four years after work began on the Raptor rocket engine that powers both stages. Flight testing of the Starship spacecraft began in 2019 with low-velocity launches and landings, and extended through high-altitude descent tests into May 2021, when Starship SN15 became the first prototype to successfully complete a high-altitude atmospheric test flight and be recovered.[20] On Aug 14, 2021 SpaceX CEO Elon Musk tweeted that an orbital Starship test flight should be ready in a few weeks pending regulatory approval.[21] An environmental assessment for FAA approval is needed including a 30 day public comment period and assessment of those comments.[22]

The Starship system is designed to carry cargo and eventually[1] passengers to destinations including low Earth orbit, the Moon, and Mars. It is an integral part of SpaceX’s mission to establish a permanent human presence on Mars over the long term.

In April 2020, NASA selected a modified Starship system as one of three potential lunar landing system design concepts to receive funding for a 10‑month‑long initial design phase for the NASA Artemis program. On 16 April 2021, NASA contracted SpaceX to develop a modified crew-rated Starship vehicle to serve as the lunar lander in the Artemis program.[23]

In the video published on Aug. 24, 2021, “SpaceX Starship Explosive Potential, and Big Bang Theory“, below:

In the video published on Aug. 24, 2021, “SpaceX Starship’s Orbital Flight CHANGES EVERYTHING. END GAME for Other Spaceflights“, below:

Elon Musk said that NASA’s moon-landing goal of 2024 is not out of reach. And that Spacex and Nasa can build a base in Moon by 2024. “We’re gonna aim for sooner than that”, Musk said in a news conference after the successful launch of SpaceX’s Crew-2 mission. But Elon Musk, the billionaire founder and CEO of SpaceX, believes it is possible for the company’s Starship deep-space transportation system, which NASA recently selected as Artemis’ crewed moon lander. Today, SpaceX uses its Falcon 9 and Falcon Heavy launch vehicles to carry out scheduled flights to space with a wide range of clients, including the National Aeronautics and Space Administration (NASA), the Department of Defense, international governments, and leading commercial companies, in the video published on June 16, 2021, “Elon Musk: Starship Will Enable Moon Base By 2024“, below:

GAME OVER! Elon Musk’s SpaceX INSANE NEW update : Moon Base before 2024 SpaceX has landed itself a three billion dollar contract from NASA that will require the Starship as the star of the show. A lunar base camp will be set up possibly before the year 2024 as part of the Artemis program and this acceleration is mainly due to the efforts of Elon Musk and his space exploration company. This turn of events has left many people with a sour taste as Jeff Bezos and Blue Origin said that a very preferential behavior has been done towards SpaceX. How does SpaceX play its role in the mission to the moon after almost fifty years? Will the Starship be able to perform as optimistically as everyone expects it to? Today’s video will be going over some details of the deal between NASA And SpaceX. The Artemis Space program will also be looked into and we will learn about a variant of the Starship called the Starship HLS. The end of the video will contain some detailed information about the Artemis base camp on the Lunar Surface, in the video published on Aug. 18, 2021, “Elon Musk’s SpaceX INSANE NEW update Moon Base before 2024“, below